A photograph of Princess Latifa,the missing daughter of the ruler of Dubai, has surfaced online, apparently showing her on a recent visit to a shopping centre.

The image, taken inside a Dubai mall, appeared after recordings leaked earlier this year alleged she was being held hostage by her father. After the tapes were published, the UN called on Dubai to prove Princess Latifa was alive. 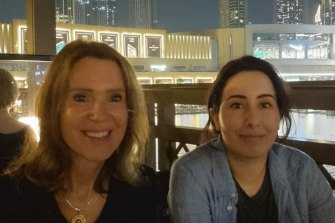 Campaigners seeking her release hailed the image, which first appeared on Instagram, as a “positive development” in their efforts to have her freed.

Princess Latifa disappeared in February 2018 after being captured by armed men as she attempted to flee Dubai. She claimed she feared for her life and was “being held hostage” by her father in tapes released this February.

The Instagram post appears to have been taken in the Mall of the Emirates’ VOX Cinema. It has so far not been verified, but an advertisement for the film Demon Slayer: Mugen Train, which was released on May 13 2021, can be seen in the background.

The face masks on the table also indicate that the photo was taken during the pandemic. In a statement, David Haigh, co-founder of the Free Latifa campaign group, said: “We confirm that there have been several potentially significant and positive developments. A further statement will be issued at the appropriate time.” 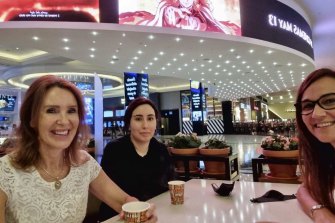 The inverified image that is believed to show Princess Latifa (centre) at a Dubai mall cafe. Credit:@shinnybryn/Instagram

The two women in the photo have other social media accounts and one commented on the post: “Lovely evening at MoE with friends.” Neither woman responded to requests for further information.

Friends of the 35-year-old princess have said they recognise the pair, according to the BBC. Latifa, one of Sheikh Mohammed bin Rashid al Maktoum’s 25 children, has not been seen or heard from in months. She was captured on a yacht in 2018 as it sailed across the Indian Ocean during a daring effort to escape.

In the tapes released earlier this year, Latifa said she fought back against the commandos and was “kicking and screaming” until they sedated her.

In a video recorded before her attempt, Latifa claimed to have been physically abused and that she had been imprisoned for three years following another failed escape in 2002. Sheikh Mohammed maintains that Latifa’s return was a rescue mission and that she is “safe at home” with her family.

The claim has been vehemently denied by those who accompanied her on the journey. Princess Haya, the Sheikh’s sixth wife, initially backed her husband’s claims, but then fled to the UK via Germany in April 2019. It is alleged she discovered further information relating to Latifa. In July Haya filed a protection order at the UK High Court in London and for custody of their two children. Sheikh Mohammed responded with a request that the children be returned to Dubai.

The court found that Haya feared for her life and had received numerous threats.

It is the second time Sheikh Mohammed has been accused of detaining a daughter. Latifa’s sister Princess Shamsa, aged 19 at the time, disappeared in 2000. Shamsa had run away from her family’s estate in Surrey, but was recaptured and returned to Dubai via a private jet two months later. She has not been seen or heard from since.

In 2019 the High Court issued a judgement that Sheikh Mohammed had arranged the kidnappings of Latifa in 2002 and 2018, as well as the detainment of Shamsa in 2000.