Mount Disappointment pilot may have been confused before crash: initial report

The pilot of a helicopter that crashed on Mount Disappointment in March, killing five people on board, may have been confused by the broadcast from another helicopter, which messaged to U-turn as they approached dense cloud.

The Australian Transport Safety Bureau released a preliminary report from its ongoing investigation into the crash on Thursday, stating that the pilot was confronted with a “wall of cloud” before flying into a large, old-growth tree trunk and hitting the ground. 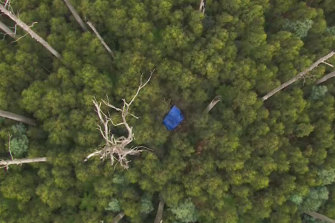 The site of the helicopter crash at Mount Disappointment.Credit:Nine News

The helicopter was one of two aircraft, owned by charter company Microflite, that departed from Melbourne’s CBD on March 31 for a flight to Ulupna on the NSW-Victorian border.

“As they approached Mount Disappointment, the pilot of the first helicopter noted the layer of cloud below was rising and becoming broken, while the base of the cloud above appeared to be lowering, resulting in the clouds appearing to converge ahead of them,” ATSB chief commissioner Angus Mitchell said.

Dense clouds reportedly surrounded the two helicopters, causing the first pilot – who was about three kilometres ahead of the second – to broadcast his intention to turn back, sending the message “U-turn” multiple times. 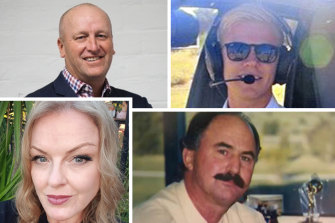 The second pilot, Dean Neal, continued along the initial route despite the first helicopter making a sharp left turn onto a southerly track.

“A short time later, before the collision with terrain, flight track data showed the second helicopter in a left descending turn,” Mitchell said.

Despite post-impact fires destroying the majority of the wreckage, investigators believe the helicopter was in good shape before the fatal collision, noting no technical safety issues.

Microflite acknowledged the release of the preliminary report on Thursday and said it remained committed to working with the ATSB and all relevant authorities throughout the investigation.

“Our thoughts continue to remain with the families and loved ones of those impacted by this terrible tragedy,” Microflite executive assistant Emma Traynor said.

Five people died in the crash, which occurred 60 kilometres north of Melbourne.

Those killed were 32-year-old pilot Neal, 50-year-old Linda Woodford from Inverloch, 73-year-old Paul Troja from Albert Park, and two men from NSW, Nicholas Vasudeva, 53, and Ian Perry. All were part of a business group, according to police.

The pilot was operating under “visual flight rules”, meaning they were only permitted to fly when visibility conditions were clear, Mitchell said.

The preliminary report gathered information from the early stages of the investigation and contained no analysis or findings. Once released, the final report will include the helicopter’s onboard camera footage, weather data, the pilot’s experience and witness information.

“Should a critical safety issue be identified at any time, the ATSB will immediately notify relevant parties so appropriate and timely safety action can be taken,” Mitchell said. 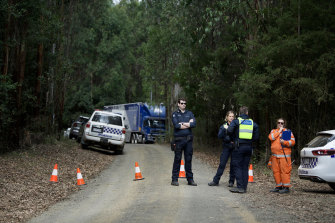 Our Breaking News Alert will notify you of significant breaking news when it happens. Get it here.