This is the heart-stopping moment a Volkswagen Golf hurtles the wrong way up a slip road and veers off into a ditch to avoid a grisly head-on collision.

Harry Schild, 69, was exiting the A1 near Thirsk, North Yorkshire, when he spotted the car hurtling towards him and his wife.

With just seconds to stop the two cars slamming into each other, both motorists swerve – but they move to the same side.

Suddenly the blue Volkswagen swings sharply towards the grass verge and careers off the road and down into a ditch.

When Mr Schild went to check the driver was alright, he claims he was more worried about his employer finding out he had crashed the company car.

And the Volkswagen motorist also alleged that his sat nav had directed him down the one-way road.

Although there is no recording of the aftermath which unfolded, he recalls that the young driver ploughed down a slope before deflecting the entire blame on to his electronic navigation device.

Speaking about the July near-miss, Mr Schild said: ‘The A1 passes over a bridge and the on and off slip roads are either side of the bridge.

‘It’s an easy mistake to make if you are not concentrating.

‘I’ve seen many a driver about to turn up it, but have realised it was the wrong turning and driven a few feet to the correct turning.

‘I stopped and walked back up the slip road to check if the driver was safe. The car was down the embankment facing uphill at about 45 degrees. It was also tilting over by the same amount. 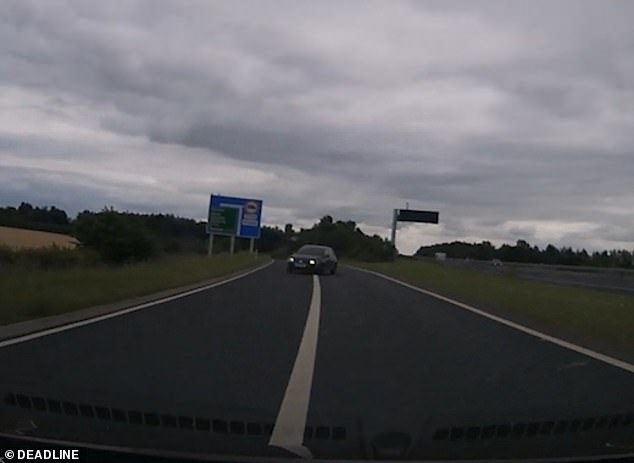 Harry Schild, 69, watches in horror as a Volkswagen Golf speeds the wrong way down a slip road in Thirsk, North Yorkshire 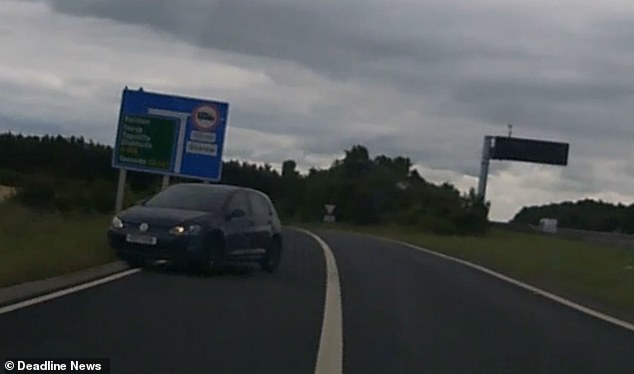 With just seconds to stop the two cars slamming into each other, Mr Schild swerves to the left, but the Volkswagen driver moves the same way

‘He asked if I would help him push the car up. He felt sure that if I pushed from behind he could drive the car back on the road. I told him to come round the car quickly.

‘If it slipped and rolled over he would be crushed. He eventually did comply, but kept saying ‘I’m sure we can get it out’.

‘I tried to explain that on grass at that angle the car would almost certainly roll over if any attempt to move it were made, and that it could do so on it’s own. It was in a very precarious position.

‘I asked if he had breakdown cover. He said he didn’t want to call them as it was a company car and he’d get into trouble.

‘I decided at that point that I didn’t want to be involved any further as I felt sure he would try again to move the car. 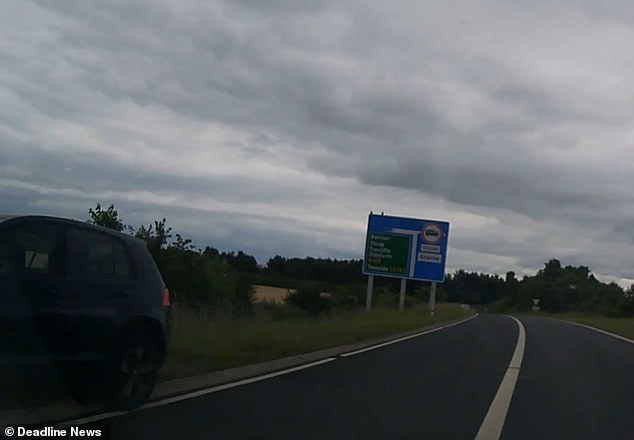 Mr Schild said he then called North Yorkshire Police, which confirmed they attended the scene of the near-miss.

A force spokesperson said: ‘Police received a report of a blue VW Golf in a ditch by the slip road off the A1(M) towards the A168, at about 1pm on Friday 5 July 2019.

‘Officers attended and assisted with recovering the car. There were no reports of any injuries.’