An Ohio mom stole the spotlight at her son’s middle-school football game on Wednesday when she refused to wear a mask and resisted a police officer before she was tasered and dragged out of the stadium in handcuffs.

Alecia Kitts has been charged with criminal trespassing in connection with the incident, which happened at Logan High School’s stadium in Logan, Ohio, according to police. Kitts’ son was playing for the visiting Marietta High School football team at the time, according to local reports.

A school resource officer repeatedly told the suspect to put on a mask under the school district’s coronavirus safety guidelines but she refused, citing her “asthma,” police say. The officer told her she would have to leave if she did not comply but she refused to obey any of his orders.

The situation escalated quickly into a physical confrontation captured on video by other witnesses in the stands, as the woman allegedly refused to leave the premises.

Video shows the suspect sitting with another woman and three children in the bleachers, with other families sitting several feet away in a socially distanced seating arrangement. The suspect appears to have a star-spangled face mask hanging out of her right pocket. 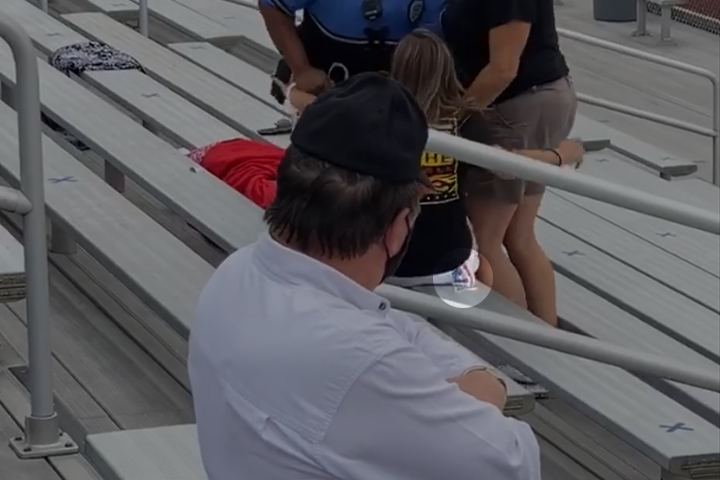 The footage begins with the officer reaching for the woman to detain her. She immediately recoils and starts trying to get away, shouting “Don’t touch me! Get off of me!”

The officer continues to struggle with her while the other woman makes a few half-hearted attempts to interfere.

The sound of a stun gun can be heard about two minutes into the video, while the suspect is still more or less clinging to her seat in the stands. She shrieks and falls off the seat, then the officer cuffs her hands behind her back and leads her away.

“This is bull—-!” she shouts in the video. She then stops on her way out to shout at her friends in the crowd.

“We’re infected together now, right guys?” she says. “Right? We’ve done this how many times together?” 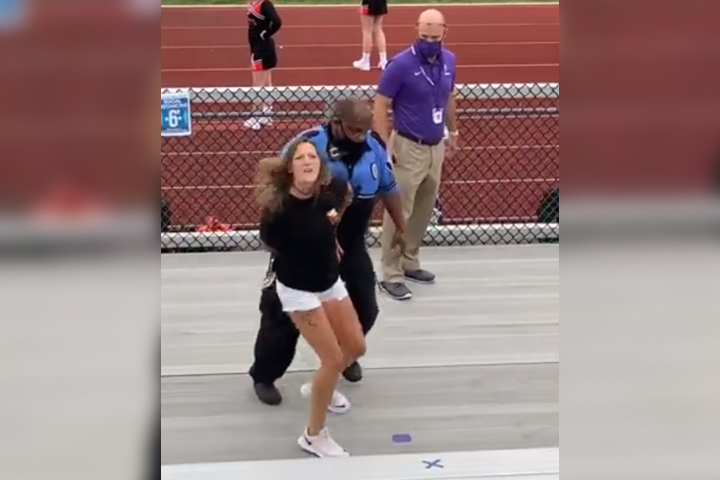 Police say the officer, Chris Smith, was on special assignment at the school, where he was specifically tasked with enforcing coronavirus mask guidelines from the state and school district. They say he made “several attempts to get her to leave” before attempting the arrest and eventually using his Taser.

“It is important to note, the female was not arrested for failing to wear a mask,” the Logan Police Department said. “She was asked to leave the premises for continually violating school policy.

“Once she refused to leave the premises, she was advised she was under arrest for criminal trespassing. She resisted arrest, which led to the use of force.”

Logan Athletic Director Theresa Schultheiss says fans were explicitly warned at the gate that they must wear masks in the stands, which are on private property.

“Everyone that came through ticketing tonight was reminded. We had regular announcements over the PA reminding you that mouths and noses needed to be covered and we had signs at the bathrooms,” she told the Marietta Times.

Cody Venderlic, the athletic director at Marietta City Schools, said he was “saddened” to hear that a parent from his school caused an issue at another stadium.

“The biggest challenge about dealing with visiting fans is people behave much better at home than when they’re on the road,” he said.

Police say additional charges are pending against Kitts and the other woman involved in the incident.

“We believe that requiring masks statewide will make a significant difference and will be key to making sure other counties do not progress to a higher level of increased spread,” DeWine said in a statement at the time.

The order applies to people indoors and anyone outdoors who cannot maintain a safe distance from others. It includes exemptions for people with a medical condition or disability.

Health officials at all levels of government say mask-wearing is a key safety measure for reducing the spread of COVID-19.

Questions about COVID-19? Here are some things you need to know:

Symptoms can include fever, cough and difficulty breathing — very similar to a cold or flu. Some people can develop a more severe illness. People most at risk of this include older adults and people with severe chronic medical conditions like heart, lung or kidney disease. If you develop symptoms, contact public health authorities.

To prevent the virus from spreading, experts recommend frequent handwashing and coughing into your sleeve. They also recommend minimizing contact with others, staying home as much as possible and maintaining a distance of two metres from other people if you go out. In situations where you can’t keep a safe distance from others, public health officials recommend the use of a non-medical face mask or covering to prevent spreading the respiratory droplets that can carry the virus. In some provinces and municipalities across the country, masks or face coverings are now mandatory in indoor public spaces.