A search effort for a missing New York woman is underway in Wyoming – while her fiancé, whom she was traveling across the country with, is back in Florida at his parents’ house.

Gabby Petito, 22, was last seen in late August at Grand Teton National Park in Wyoming, according to police, and she was reported missing over the weekend after her parents hadn’t heard from her in a week.

“On behalf of the Laundrie family, it is our hope that the search for Miss Petito is successful and that Miss Petito is reunited with her family,” Steven Bertolino, the attorney for Petito’s fiance Brian Laundrie, said in a statement Tuesday afternoon. 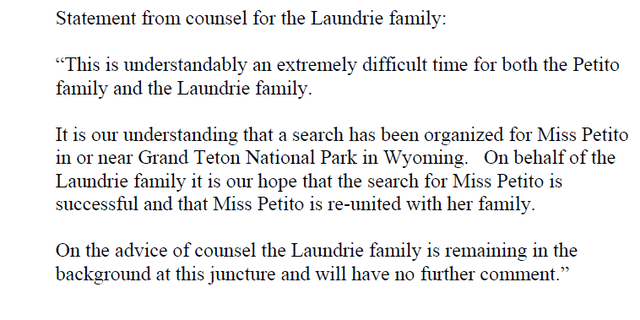 Petito and Laundrie were road tripping across the U.S. in a white Ford Transit van, which police have recovered as part of their investigation into her disappearance.

Laundrie has not been charged with a crime, but police in North Port, Fla., told the New York Post that his parents declined to make him available to speak with investigators.

“On the advice of counsel, the Laundrie family is remaining in the background at this juncture and will have no further comment,” Bertolino said.

Petito, of Blue Point, N.Y., had been living in Florida with Laundrie. Police described the missing woman as White and about 5 feet, 5 inches tall, weighing around 110 pounds. She has blonde hair and blue eyes, and several tattoos, including one on her finger and one on her forearm that reads “let it be.”