Michigan video shows a parrot crying just like a child

‘People think I have a crying baby in here’: Parrot bawls just like a child as it has a ‘temper tantrum’

Naughty Nico the parrot cries like a baby from inside a crate to get attention.

The video, taken in Michigan, shows animal rescuer Mark Rosenthal explaining that the bawling baby viewers can hear is, in fact, his pet bird.

Mr Rosenthal is seen walking around three crates on a trolley to the sound of a child’s sobs.

He says: ‘Okay this is Nico having a temper tantrum getting ready for a show. Nico, are you done?

‘This is what I go through every day. People think I have a crying baby out here. I will show you it’s really just Nico.’

The green parrot is seen innocently perched on a wooden bar in the crate. 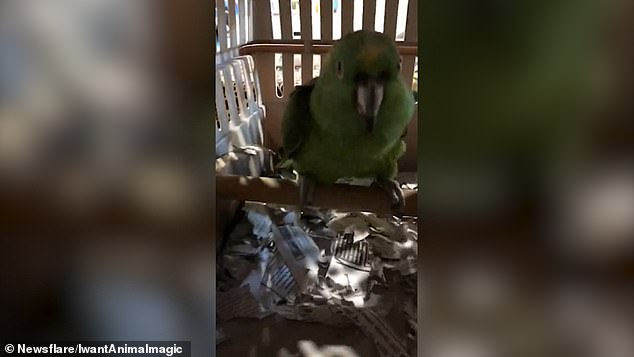 Nico the parrot was caught pretending to cry like a baby from inside a crate in Michigan. Owner Mark Rosenthal said he has to tell people ‘every day’ that it is not a real baby making the noise 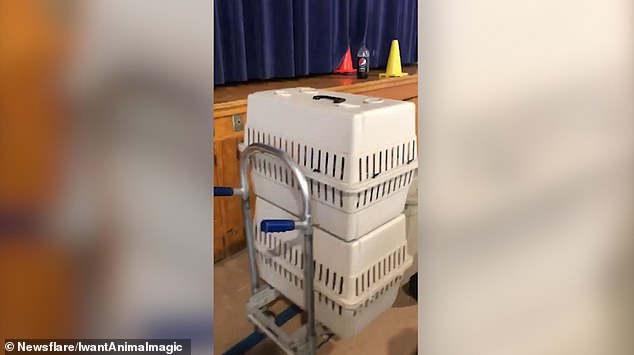 Nico was ‘crying’ from inside a crate. Mr Rosenthal has a rescue center for exotic wildlife and was putting on a show in Belleville

The cheeky chap looks straight into the camera as his owner tries to calm him down.

As he strokes Nico’s head, Mr Rosenthal says: ‘Nico, you are such a baby. Yes you are. Now people are coming in because you were crying.’

The pair were preparing for a live show in Belleville when the clip was taken.

How do parrots talk?

Key structural differences in the brains of parrots compared to other birds may explain their ability to imitate sounds.

Parrots are one of the few animals considered ‘vocal learners’, meaning they can imitate noises.

In addition to having defined centers in the brain that control vocal learning called ‘cores,’ parrots have what the scientists call ‘shells,’ or outer rings, which are also involved in vocal learning.

The shells are relatively bigger in species of parrots that are well known for their ability to imitate human speech.