Michael Gove today vowed to copy the ‘spirit’ of Margaret Thatcher’s government in helping the North of England.

The Levelling Up, Housing and Communities Secretary praised the former prime minister’s ‘active’ role in pursuing economic growth during the 1980s.

He pointed to how Thatcher helped turn London’s docklands into an ‘economic success story’ during her time in power.

‘Government created the environment, the private sector created the jobs,’ Mr Gove said as he set out efforts to regenerate communities across Britain.

The Cabinet minister addressed the Convention of the North following a bitter row among MPs over last week’s allocation of the latest tranche of ‘levelling up’ cash, which saw local areas have to bid against each other for money.

More than 100 projects were awarded a share of the £2.1billion cash pot, but a number of MPs – including Conservatives in ‘Red Wall’ areas – vented their anger at how the funding was allocated.

The Government was accused of pumping money into the South of England to the benefit of more affluent areas.

Mr Gove today admitted there had been ‘lively comment’ about how the latest funds were shared out, but insisted it was ‘just a small fraction of our overall spend on levelling up’.

He also confirmed there would be a further round of investment from the levelling up fund after Chancellor Jeremy Hunt’s budget in March. 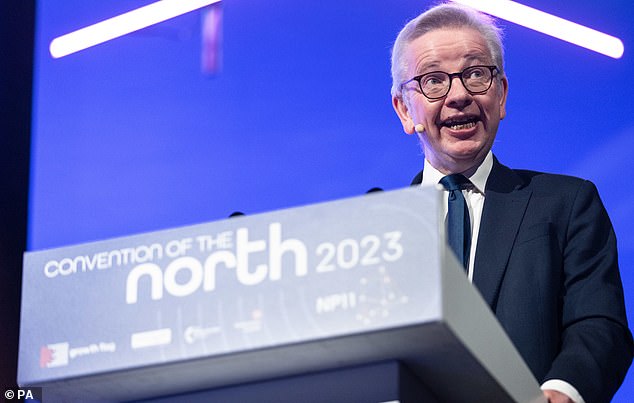 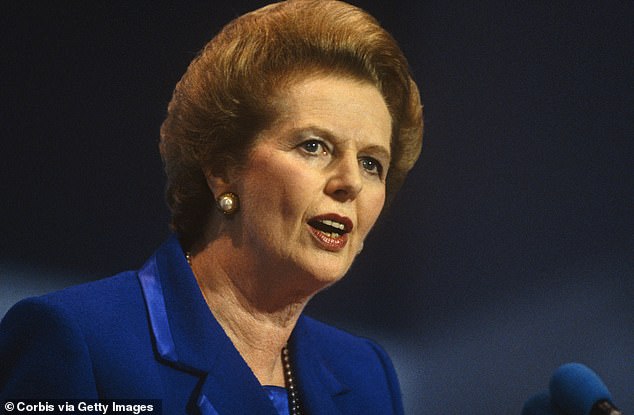 The Levelling Up, Housing and Communities Secretary praised the former prime minister’s ‘active’ role in pursuing economic growth during the 1980s

Mr Gove described the North-South divide as ‘one of the most profound weaknesses in the UK’s political economy’.

And he said Britain had ‘suffered more than any of our neighbours, friends and rivals from an enduring and entrenched geographical and social imbalance’.

Although he described London as a ‘priceless asset’ for the UK, Mr Gove said the country could not ‘rely so much on one region’ as he acknowledged how wealth, influence and jobs had been ‘concentrated in the south-east quarter of the country’.

‘The UK economy has been like a football team with a star striker but a midfield that consistently struggles to get the ball upfield and a defence full of holes – and no forward – not even Lionel Messi – can do it on his own,’ the Cabinet minister added. 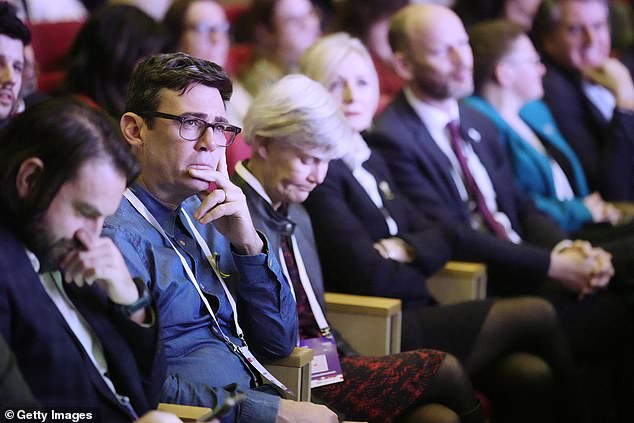 Other guests at the Convention of the North included Andy Burnham, the mayor of Greater Manchester

Pointing to Thatcher’s efforts to regenerate London’s docklands, Mr Gove said it demonstrated that ‘growth is not secured by absent Government but by active Government’.

He described how cutting taxes and deregulation ‘just weren’t enough’ to revive a ‘derelict economic desert’ in the capital, and highlighted how new transport links, housing and cultural, sporting and educational investment followed.

‘Government created the environment, the private sector created the jobs. London Docklands today is an economic success story – one of the most signal success stories we owe to Mrs Thatcher’s Government.

‘And it is that spirit that animates our levelling-up policies, active government.’

In her own speech to the Convention of the North, Labour’s shadow levelling up secretary Lisa Nandy attacked the ‘Hunger Games-style system’ through which the Government had allocated levelling up funds.

She promised a Labour government would ’empower our communities to take control of their own economic future’.

‘Today we’re firing the starting gun on the biggest transfer of power out of Whitehall and Westminster in British history with one simple ask – tell us what you need to create strong local economies and thriving inclusive communities and we will back you,’ Ms Nandy said.