Last orders before lockdown: Revellers in Leeds hit town to make the most of final weekend of freedom as partygoers in Newcastle head out before 10pm curfew

Revellers in Leeds hit the pubs and bars to make the most of their final weekend of freedom before possible new coronavirus restrictions in the city.

Students and young people dressed to impress as they hit the town on Saturday night and enjoyed themselves in the bustling city centre.

Two women could be seen with their hands in the air as a musician sang in the streets, while another man gave his friend a piggyback on their way to the pub.

Police were a visible presence and could be seen chatting to punters and patrolling the area as queues formed up at bars and pubs in Leeds.

In Newcastle punters still headed out to town to have a good time, but the streets dramatically emptied at the 10pm curfew as the curfew was enforced.

It comes amid a rising number of infections in Leeds prompted warnings the it may soon head in the same direction as other parts of West Yorkshire with additional coronavirus restrictions, including a 10pm pub curfew.

Leeds recorded its highest ever daily increase of Covid-19 cases on Friday, with the city confirming a further 117 infections. The largest rise ahead of this figure was reported on April 22, when 109 cases were detected. 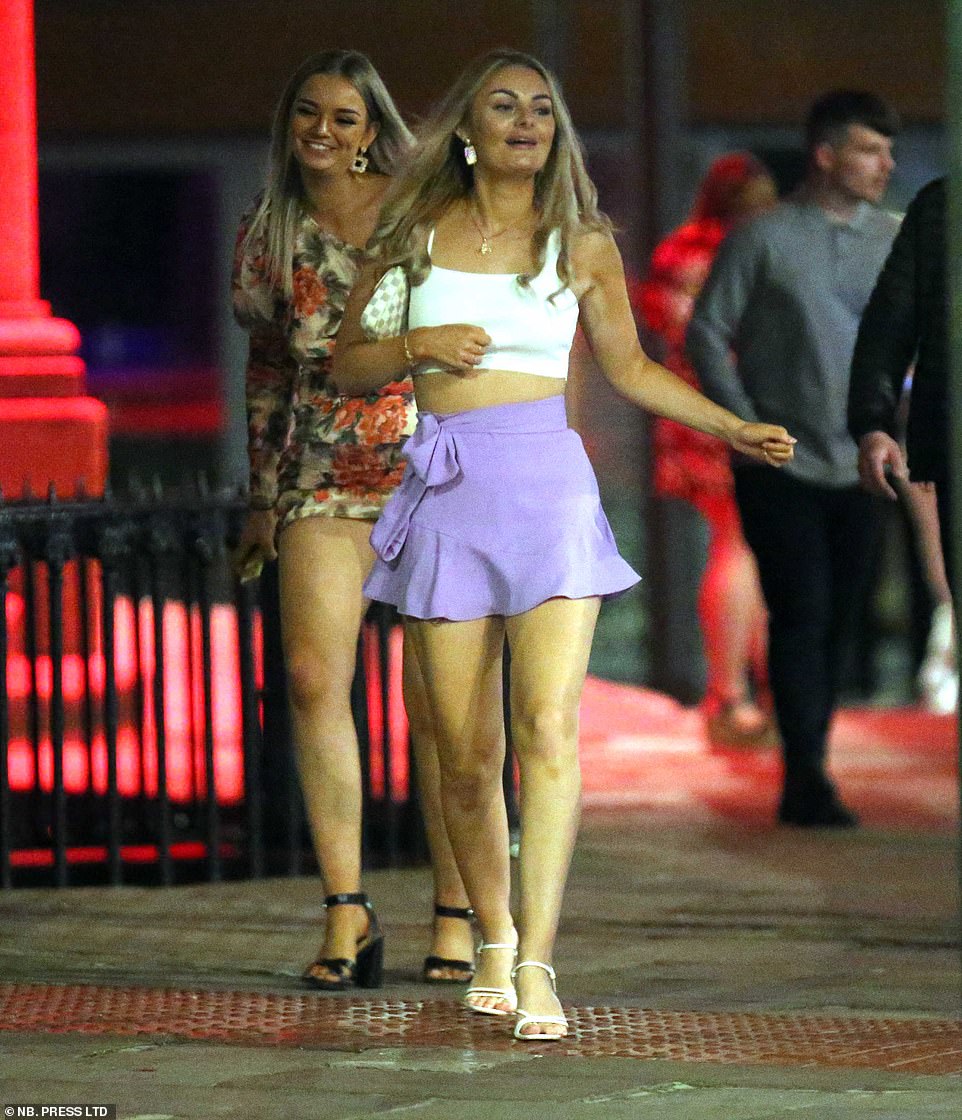 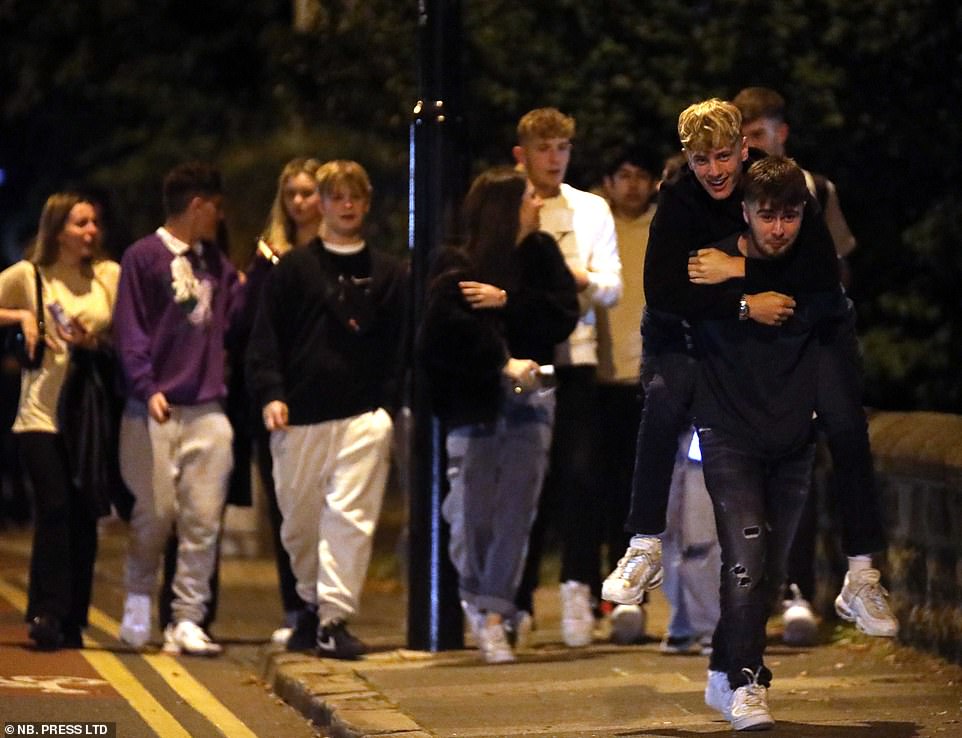 A group of friends head into Leeds on Saturday night. One friend is helpfully giving his pal a piggyback on the way in 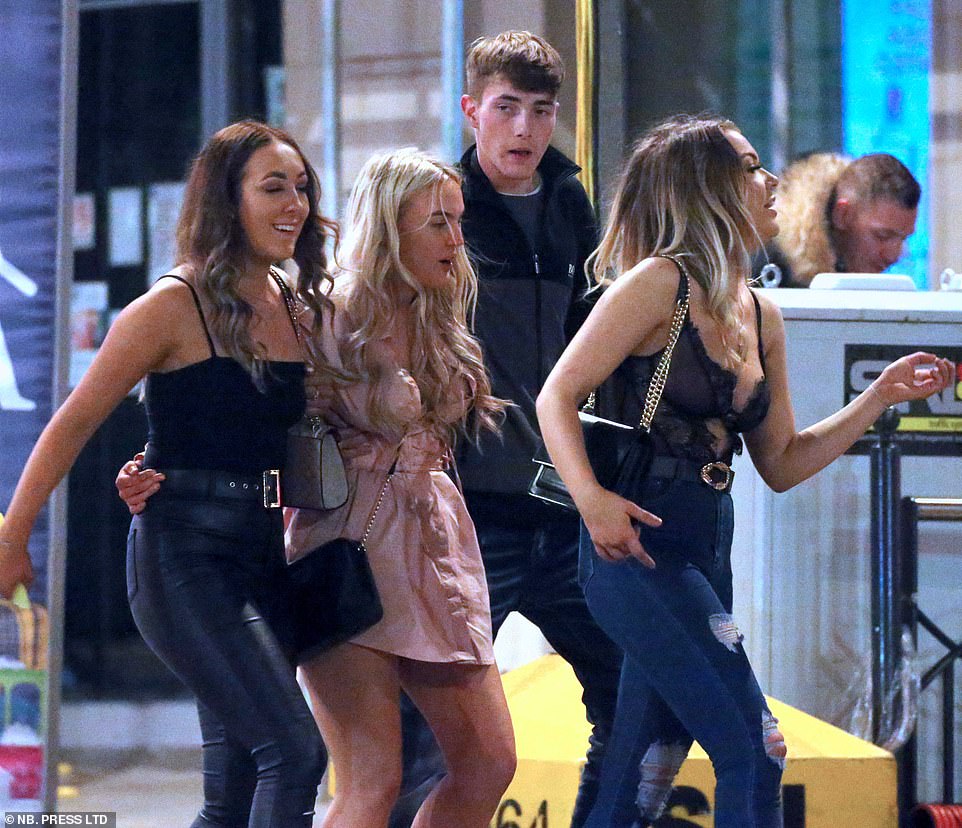 Three women head into the city centre in Leeds. It comes amid a rising number of infections in the city prompted warnings the it may soon head in the same direction as other parts of West Yorkshire with additional coronavirus restrictions 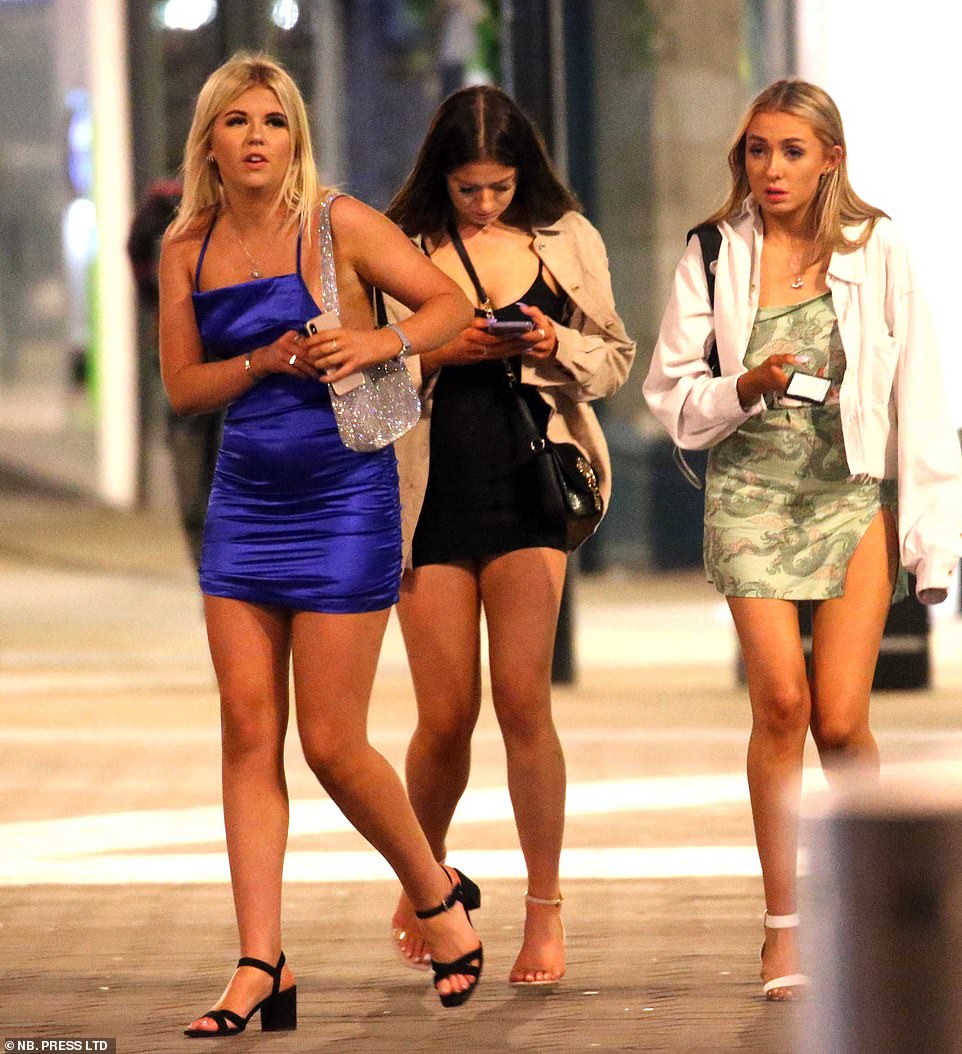 Three friends head out on Saturday night in Leeds. It might be the last weekend revellers can stay out late before a curfew is imposed 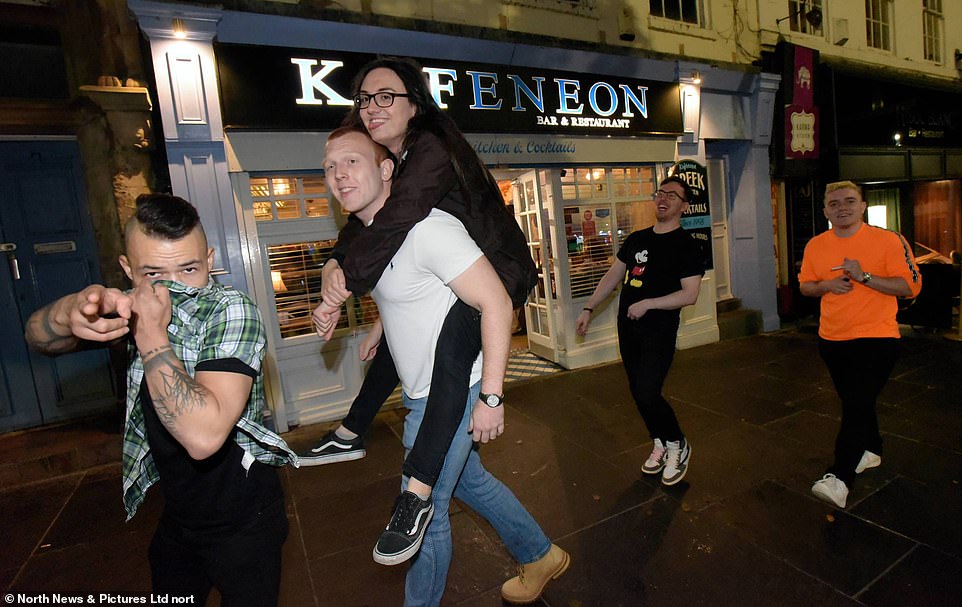 A group of friends hit the town in Newcastle on Saturday. The evening was cut short, as a curfew is currently in place at 10pm 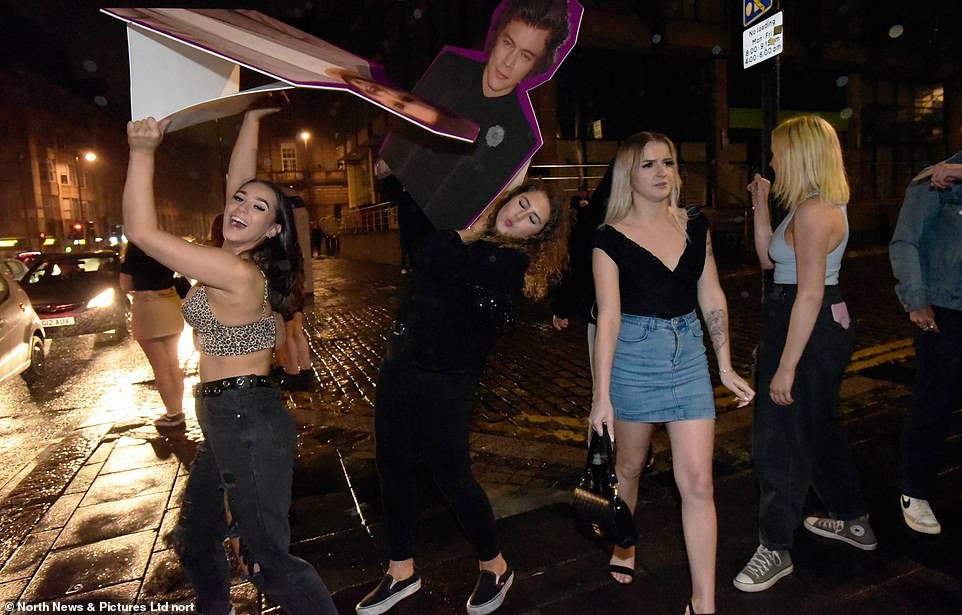 A group of friends laugh and joke in Newcastle on Saturday night. Two of the women are holding up cardboard cut outs of One Direction

Tough new restrictions to control the spread of coronavirus were announced for the North East of England last night, ahead of further rules which were unveiled yesterday across parts of the North West, Midlands and West Yorkshire.

Similar lockdown measures will then come into force in Lancashire, Merseyside, Warrington, Halton, Wolverhampton, Oadby & Wigston, and parts of Bradford, Kirklees and Calderdale from Tuesday.

Residents in these areas are banned from socialising in homes or gardens with people outside their household or ‘bubble’ and food and drink venues are restricted to table service only. Restaurants, bars and pubs will have to close between 10pm and 5am.

It comes as Mr Hancock today admitted that a new national crackdown is on the cards as he warned infections are ‘accelerating across the country’ and more people will die due to the pandemic. 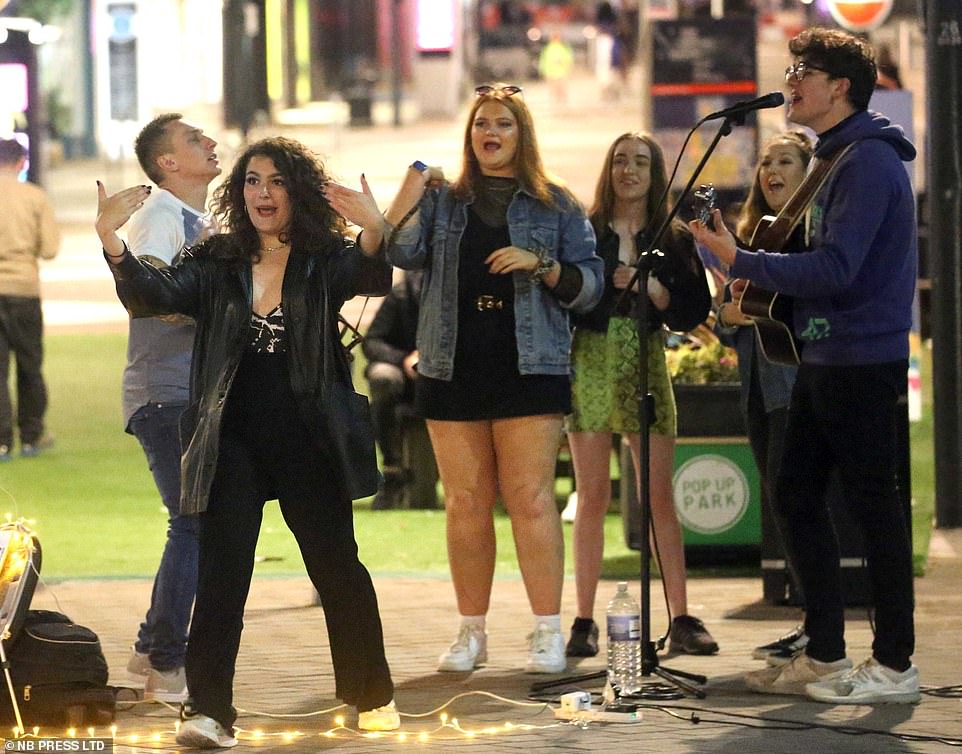 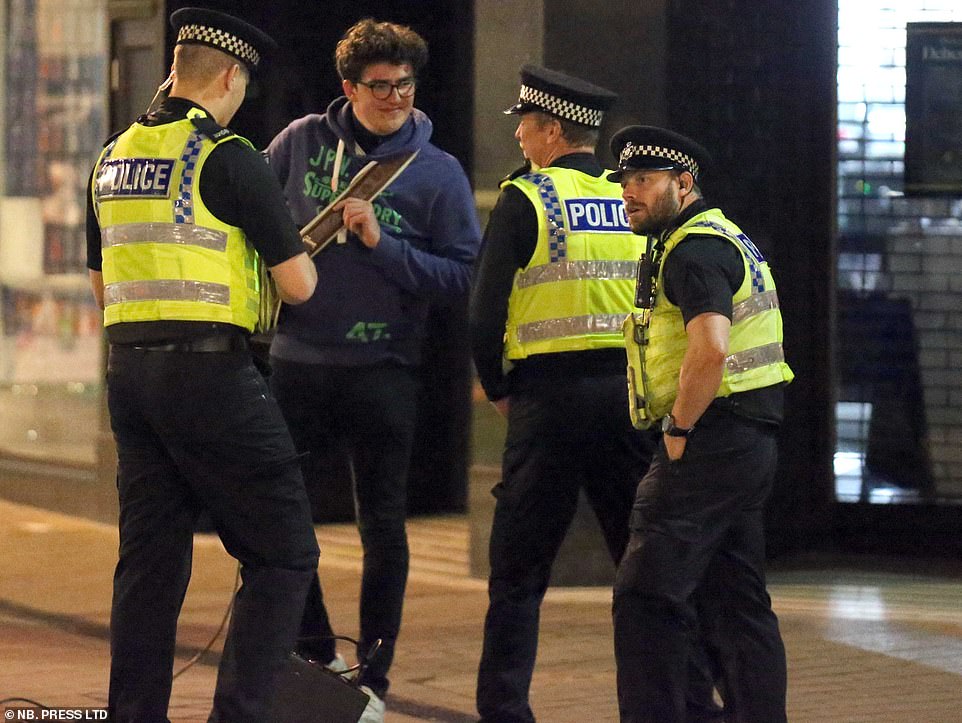 Police officers talk to a member of the public in Leeds city centre on Saturday. A number of pubs and bars were busy 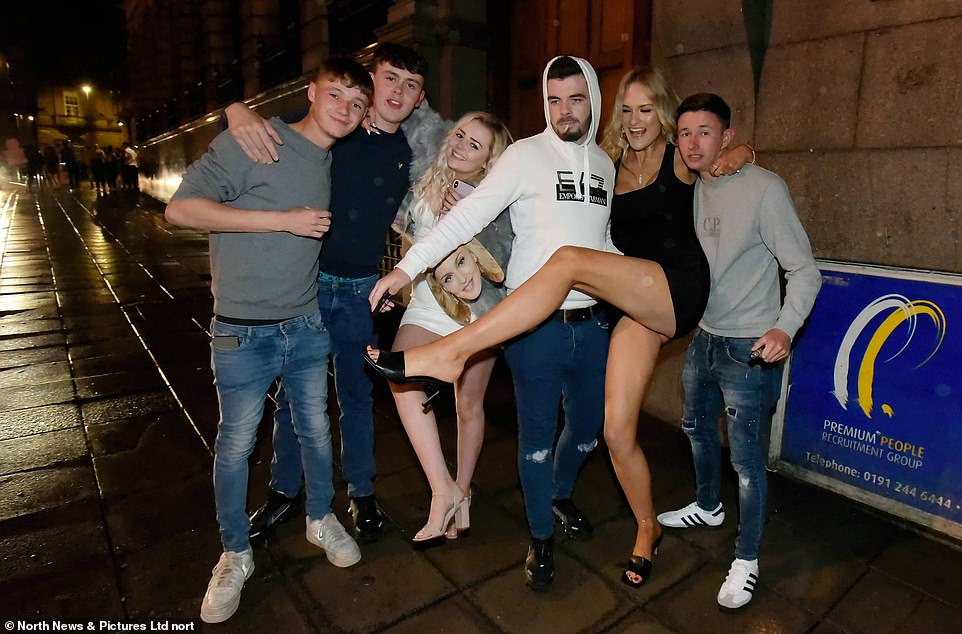 A group of friends hug in Newcastle city centre on Saturday night. The city is currently under a 10pm curfew 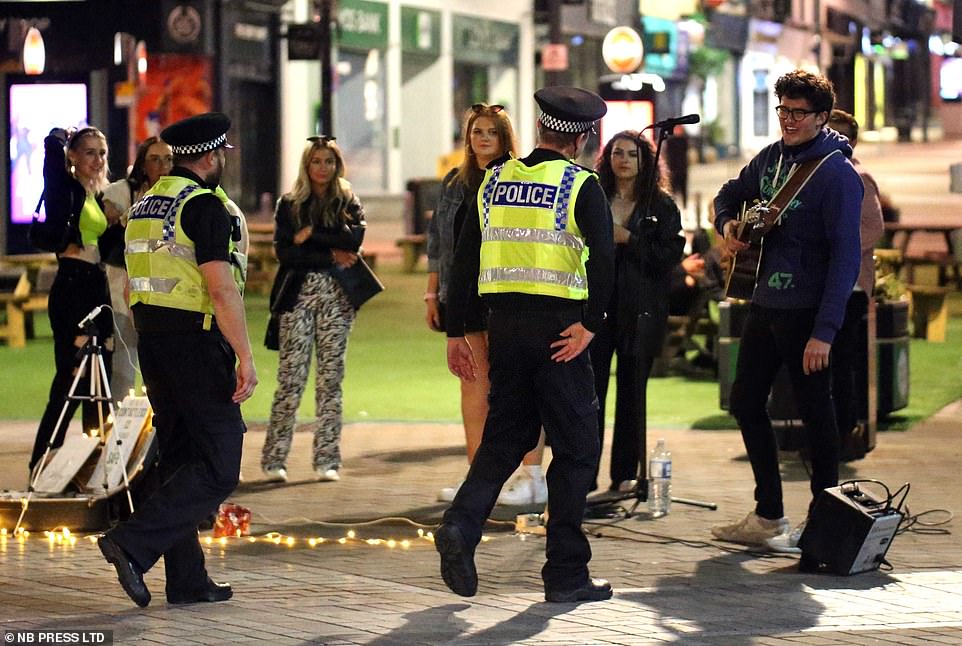 Police officers talk to a musician on Saturday night in Leeds city centre, while some other partygoers stand nearby

The Health Secretary pleaded with the public to ‘come together to tackle this virus’ as ministers consider imposing draconian restrictions for a fortnight in a ‘circuit break’ to stop the spread.

The move could come as soon as next week, with pubs, restaurants and hotels across Britain facing being shut to prevent ‘significant’ casualties.

Last week Health Secretary Matt Hancock said a national lockdown was the ‘last line of defence’. But he warned that it was a ‘big moment for the country’ with cases now doubling every eight days, and unless the ‘Rule of Six’ restrictions worked more would have to be done.

Around 12million people across the UK are now in areas of intervention, including parts of Greater Manchester, Leicester and Scotland. But neither Middlesbrough and Hartlepool in the North East, two other authorities officially named as a hotspot by Public Health England last week. 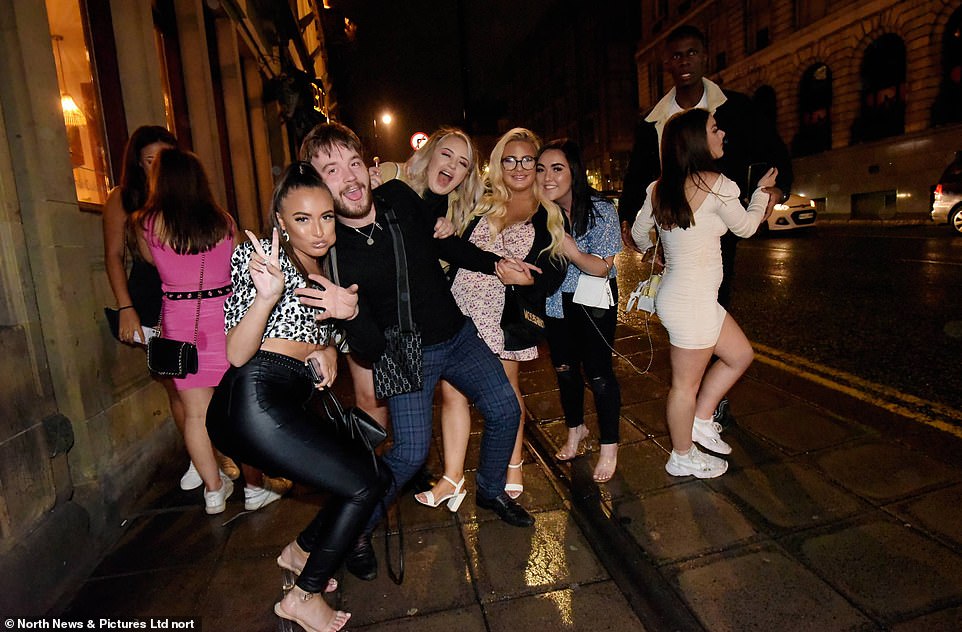 A group of friends hug in Newcastle city centre on Saturday night. The city currently has a curfew

Increasing numbers of infections in London and Leeds have also prompted warnings the cities may soon head in the same direction as the North East with additional restrictions.

It comes as London mayor Sadiq Khan is reportedly pressing for new coronavirus restrictions for the capital on Monday, including a 10pm pub curfew.

Mayoral sources said the city was catching up with disease hotspots in the North West and North East of England, which have been placed under new controls.

While data from only a few days ago suggested London was two weeks behind those areas, the latest modelling seen by Mr Khan was said to show the gap had closed to two or three days.

The mayor is now urging ministers to extend the latest regional restrictions – including ordering bars and restaurants to close at 10pm – to cover the capital as well.

A mayoral source told HuffPost: ‘It’s clear that cases in London are only moving in one direction, we are now just days behind hotspots in the North West and North East. We can’t afford more delay.

‘Introducing new measures now will help slow the spread of the virus and potentially prevent the need for a fuller lockdown like we saw in March, which could seriously damage the economy once again.’

He is also said to be looking at the possibility of asking those who are able to work from home to do so.

Such a move would be in sharp contrast to the Government, which has until recently been urging people to get back to their offices following the easing of lockdown restrictions.

It comes as people in England who refuse an order to self-isolate will face fines of up to £10,000, the Government has warned amid deepening concern at the sharp upsurge in coronavirus infections.