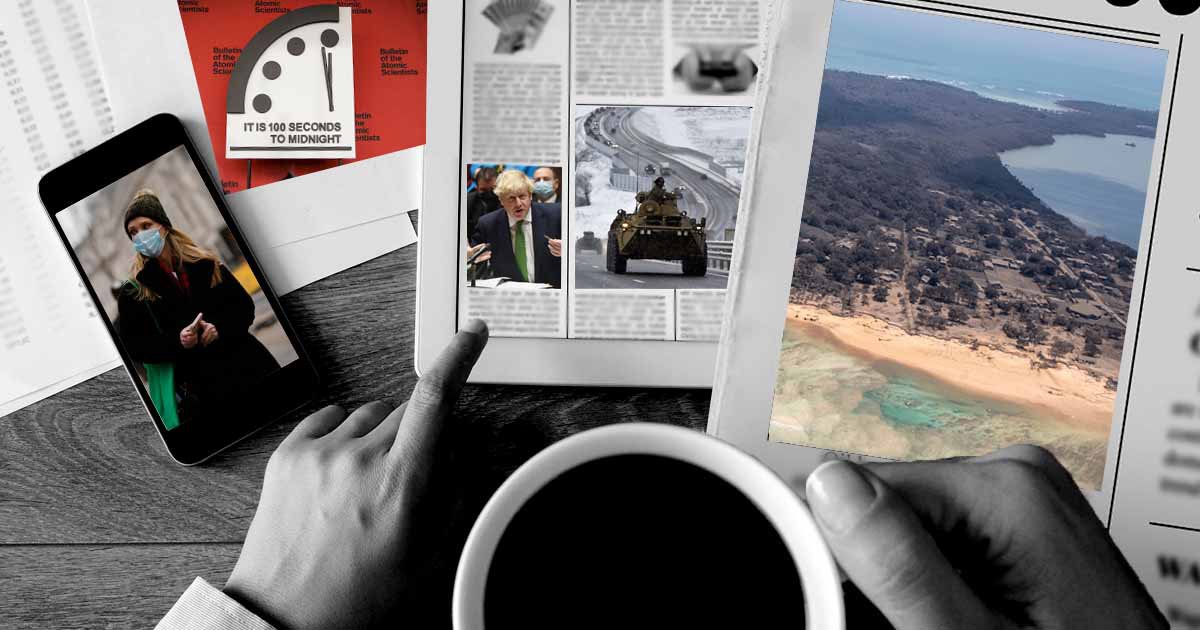 Right, if this isn’t what the end of the world looks like, then what is?

The end times are upon us, reader, and there really is only one thing for it: the pub.

You’ll probably see us out and about this weekend – we’re the tired looking sorts in the corner talking about politics over a couple of cool Bacardi Breezers.

We’d love for you to come and say ‘hi’ but we really must insist you read this round-up first.

It’s just, the way things are going, there might not be many nights out left and, y’know, what good are you to us if you can’t chat The News?

Catch up on it all below and then get yourself out there before the big man calls last orders on us all.

Is the party over?

Boris Johnson is continuing to undergo the political equivalent of sleep paralysis and the nightmare doesn’t look like ending any time soon.

‘Operation Save Big Dog’ began in earnest this week, with Number 10 lining up policy announcements to try and wrestle back control of the narrative. It didn’t go to plan and no one is really sure if the hound will still be in his Downing Street kennel this time next week.

Ex-bezzy Dominic Cummings, who has seemingly made it his life’s work to troll the prime minister, attempted to torpedo his old bosses’ claim that he believed a garden party in Downing Street in May 2020 was a ‘work event’. He also claims there’s a paper trail to prove it – that would be, to put it mildly, not ideal for BoJo.

On Tuesday, Mr Johnson emerged for the first time in a week and gave a teary interview to Sky, which felt a bit more like a Big Brother diary room confession than it did a prime minister trying to look in control.

Reports then began to emerge that several Tory MPs had called for a vote of no confidence in their party leader, including some elected in 2019 on a wave of Boris-mania (remember that?). The move was dubbed the ‘pork pie plot’ for reasons too tedious to explain here.

After 24 hours of fevered speculation where a lot of people on Twitter pretended to know a lot of stuff they didn’t, the plot came to nothing. It might be resurrected next week, or it might not be. We don’t know. They don’t know. No one knows what is happening any of the time.

Then on Wednesday Mr Johnson trudged into the Commons for a spot of light ritual humiliation.

Bury South MP Christian Wakeford announced he was defecting to the Labour Party minutes before, theatrically flouncing across the aisle and plonking himself down behind a grinning Sir Keir Starmer.

David Davis impressively managed to over-dramatise a moment of high drama by invoking memories of MPs calling for Neville Chamberlain, the man who tried to appease Hitler, to resign in the 1940s. Metro.co.uk would just like to remind all readers that Second World War references are almost never a good idea.

And just in case that wasn’t all bad enough, a senior Tory backbencher alleged the PM’s henchmen were ‘blackmailing’ and ‘intimidating’ disloyal MPs and urged them to go to the police.

The mysterious Sue Gray is locked in an office somewhere in Whitehall putting the finishing touches to her report into lockdown boozing in Downing Street, which is expected to be published early next week.

It could be curtains for Boris. Or it might not be. Honestly, no one knows.

TL;DR: Boris Johnson had the worst week he’s had since last week.

Whilst tending to the mangled remnants of his political fortunes, Mr Johnson also turned his attention to the small matter of the pandemic.

Confirmed Covid-19 infections are still hovering around the 100,000 a day mark, and it’s worth remembering that until one month ago that number had never been reached.

But amid some encouraging signs the wave is receding, high vaccination rates and evidence Omicron is less severe than previous variants, the government has announced it’s tearing up restrictions.

From January 27, mandatory mask-wearing in public places, working from home advice and vaccine passports will all expire.

The PM also set out plans to end the legal requirement to self-isolate by March 24, even suggesting that date could be brought forward.

So that’s that. After weeks of dire warning about the health service being overwhelmed and millions being confined to their homes, everything is going to just be…fine?

No, reader, that would be too easy and chill for old Covid. Scientists are nervously watching a new sub-strain of the Omicron variant they fear may be even more transmissible.

There’s no reason to panic about it but it’s a timely reminder that this thing isn’t just going to go away.

TL;DR: This pandemic is over when and only when Boris says it is, okay?

Surrounded on all sides

Never one to be outdone by wee Kim Jong-un, Vladimir Putin reminded the world this week that he can evil genius with the best of them.

Russia has stationed 100,000 soldiers armed with every tool of misery inducement imaginable on Ukraine’s border in an attempt to strong-arm Nato into making big concessions.

Here’s what you need to know. Ukraine has had independence from Moscow since 1991 and since 2013 has been getting closer to Europe, even setting out on the path to joining the West’s military alliance.

Russia is absolutely not having this. It has accused Nato of expanding into what it considers its sphere of influence and threatening its borders.

Since 2014, Moscow’s ‘little green men’ – Kremlin-backed militants who Putin wants you to believe have nothing to do with him –  have been occupying parts of eastern Ukraine and Crimea has been absorbed into Russia by force.

Moscow has put its cards on the table and is using the threat of invading Ukraine to get the US and Nato to commit to a range of demands about scaling back military involvement near Russia. The West will not do this but is open to limited negotiations.

Washington and Moscow’s diplomatic head honchos sat down for talks this week that fall into the ‘not great but not a disaster’ category and which keep hopes alive that war can still be avoided.

The UK government has sent anti-tank missiles to the Ukrainian army and has committed to helping to isolate Russia from the global economy.

Any invasion would be a tragedy for the people of Ukraine, a huge gamble for Russia and an unprecedented problem for the West.

TL;DR: The people of Ukraine are trapped between a rock and a head case.

Spare a thought for the good people of Tonga, many of whom will spend this weekend rebuilding their communities after a devastating tsunami.

Extraordinary stories of survival, including a man who swam for 27 hours to stay alive, have emerged.

While the death count has stayed mercifully low so far, the damage to some islands has been extreme and some are yet to be reached by aid workers.

The country’s main airport was out of action for five days because it was blanketed in thick ash. Damage to a communications cable which runs underwater left the vast majority of people without any internet or phone connectivity.

Aid flights from Australia and New Zealand have finally started to touch down and food and clean drinking water are being distributed.

Tonga’s unique geography has made assessing the damage incredibly difficult but images taken from a military plane reveal remote islands have been transformed from green paradises into blackened, battered wastelands.

Angela Glover, a 50-year-old British animal charity worker from Brighton, was the first confirmed death resulting from the tragedy.

The Queen has sent a message of support to Tongans as they ‘work together to recover from the damage caused’.

TL;DR: Nature tried and failed to erase Tonga but it’s already getting back on its feet.

With impeccable timing, the self-appointed gatekeepers of all things armageddon-related met this week to decide how close the world is to self-destruction.

Since the 1940s, scientists have got together to judge just how close the world is to doomsday, taking into account things like the proliferation of nuclear weapons and climate change.

This cheery analysis is then presented in the form of hands on a clock, with midnight representing the end of the world.

Since 2020, the clock has been at 100 seconds to midnight, the closest it has ever been.

Ironically, it couldn’t be reassessed in 2021 because the world was too busy putting this armageddon stuff into practice.

Surely then, two years on and a whole pandemic later, the hands would move forward? North Korea even fired some missiles into the sea to celebrate.

The big unveiling came on Thursday and…nothing. It stayed the same.

Apparently, the supposed greatest minds on the planet looked at the last 24 months of absolute horror and thought ‘meh’.

We don’t know what these people are drinking but, whatever it is, we’ll have a double.

TL;DR: Take it from your old pals at Metro.co.uk, the world is very much ending. Cheers.