RANTING and raving, an angry man towers over me, calling me names and telling me to “shut the f*** up”.

Then an unkempt, drunken woman – who had been comatose on the couch minutes earlier – calls me “a disgusting little pile of mess” and comes at me with a pair of scissors to cut of my “filthy” hair. 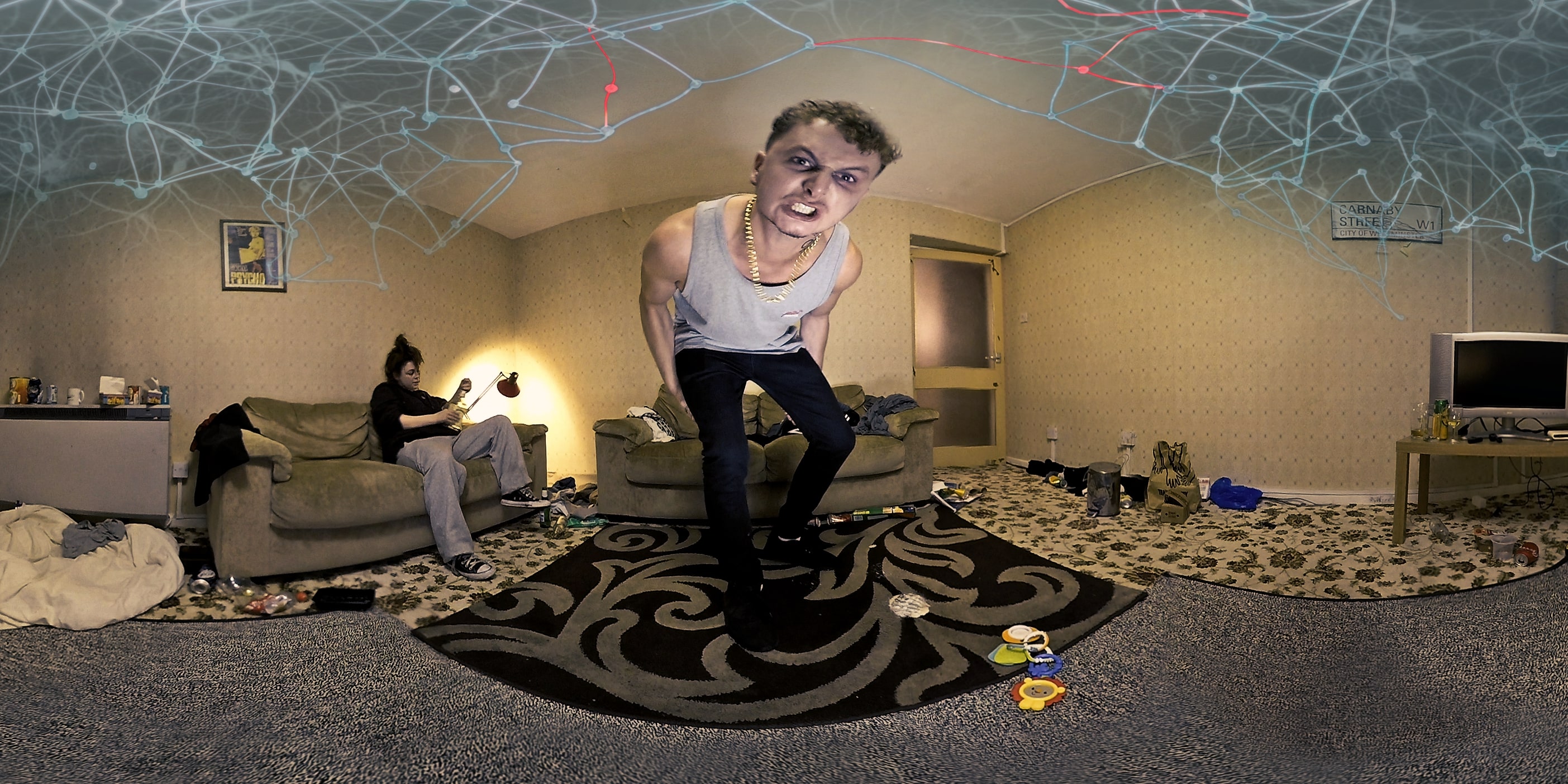 It’s terrifying but I am powerless to move or fight back.

This is not a nightmare but the reality of a child who lives with abuse – and thanks to revolutionary virtual reality technology I was getting a unique insight into how that feels.

One in five children in the UK is exposed to domestic abuse and many end up in care.

Now VR headsets – which offer an interactive experience within a simulated environment – are being  used around the country to put social workers, foster parents and teachers in the shoes of abused children, and give them a better understanding of the trauma they suffer. 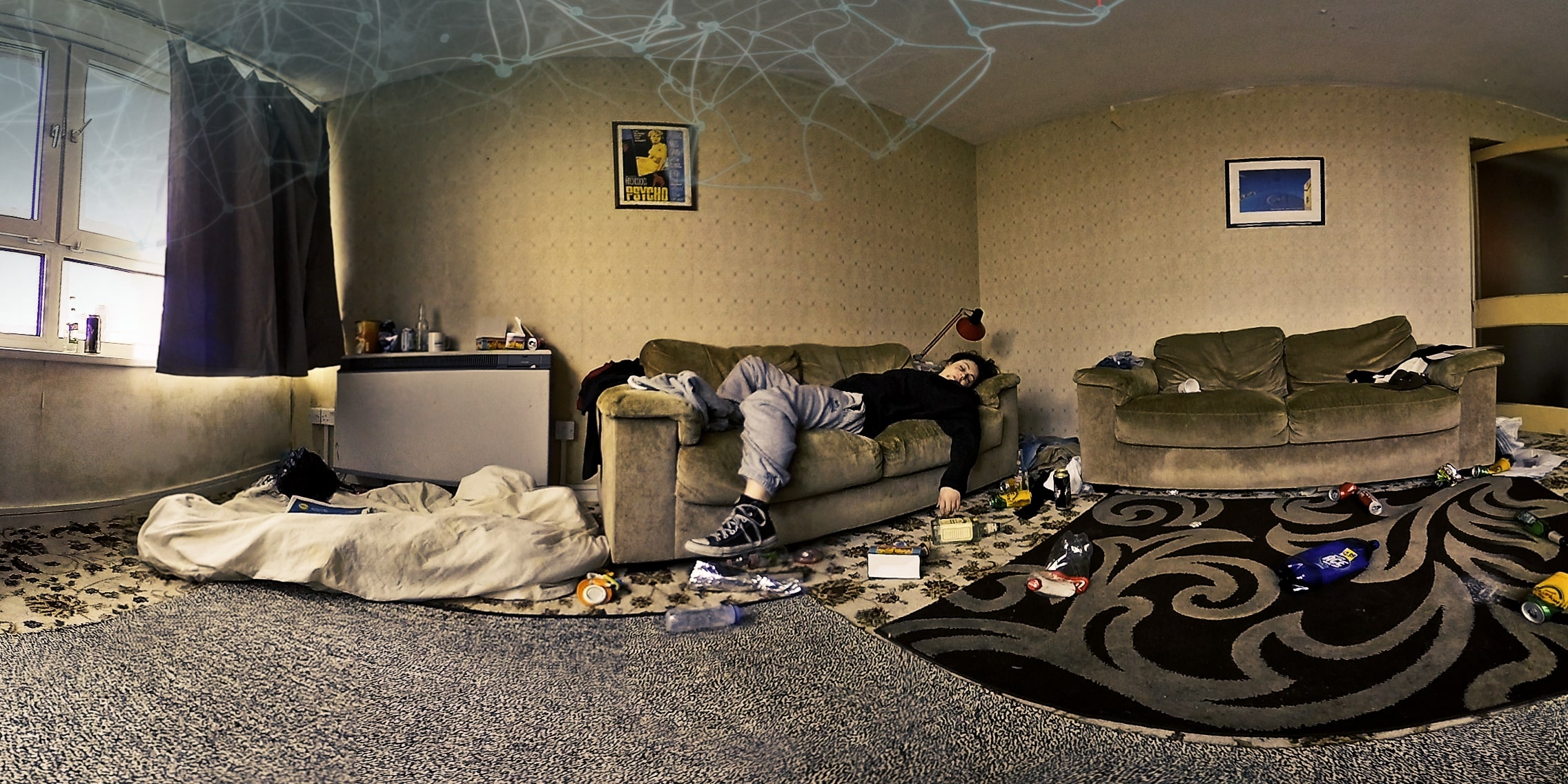 Terrified in the womb

It’s the brainchild of Helen Costa, CEO of social development group The Cornerstone Partnership, who also believes the sets could be used to tackle knife crime, youth crime and grooming in coming years.

An amazing 90 per cent of social workers and 91 per cent of teachers said they would change the way they dealt with traumatised kids as a result of the sessions.

I was given exclusive access to the headsets by Helen, who warned me that what I was about to see acted out was deeply upsetting  – and she was right.

Wearing the tight grey headset, the immersive programme begins in the womb, with you as the baby, listening to an abusive dad swearing at and threatening his pregnant partner.

Though muffled, the shouting and violent language is disturbing and instantly inspires a feeling of danger. 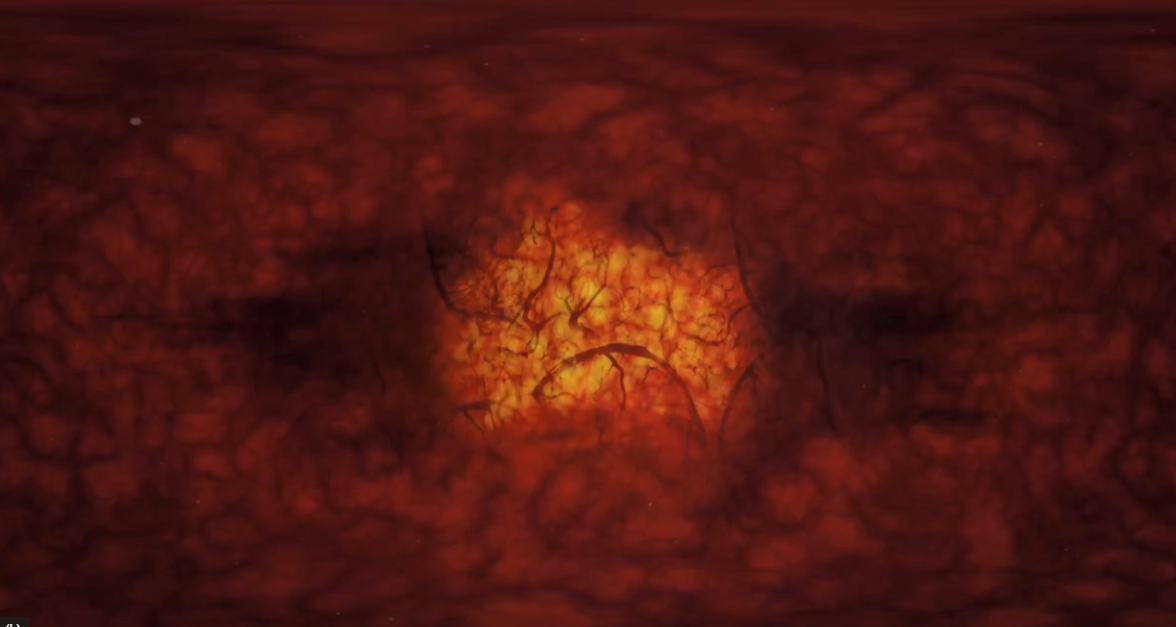 The child’s voiceover says: “I’m not ready to come into the world but I already know what it’s like to feel frightened. I’ll have to fight to survive.”

But it is the second film, from the point of view of a child under the age of two, which is by far the most harrowing.

The first view is of a filthy flat, cluttered with empty beer cans, bottles and the debris of drug use. Dirty nappies and old takeaways are strewn across the floor and a baby –whose view I have – is crying.

In seconds, the door slams open and ‘Mama’ – dressed in dirty grey tracksuit bottoms and a baggy T-shirt – pushes a bruised face towards me and asks “Why’s she crying?”

Dad follows and steps in a pool of sick on the floor and starts shouting at me. 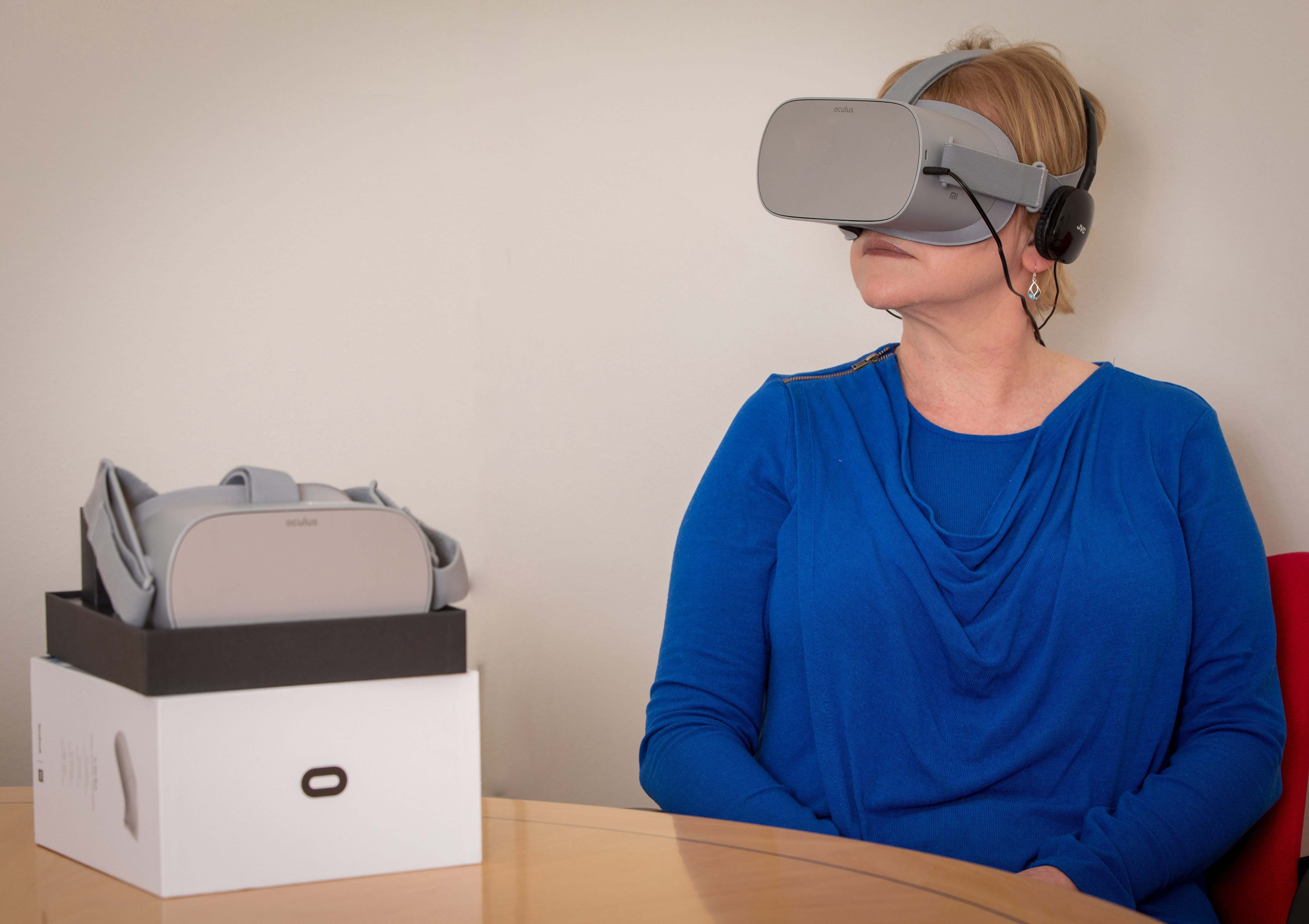 The effect is instant. Even though I know this is not real, fear and anxiety overwhelm me and I am left feeling incredibly vulnerable.

I am so immersed, it feels like I really am in the room,  at the mercy of this toxic relationship.

As the virtual me continues to cry, Mum swigs from a bottle of Jim Beam before passing out on the sofa and Dad screams at me again.

Then he turns on Mum and shouts, “When are you going to clean that up? Stupid b***h.”

A new scene shows Mum drunkenly trying to feed the virtual me by putting a few chips in a dirty plastic container with ketchup. 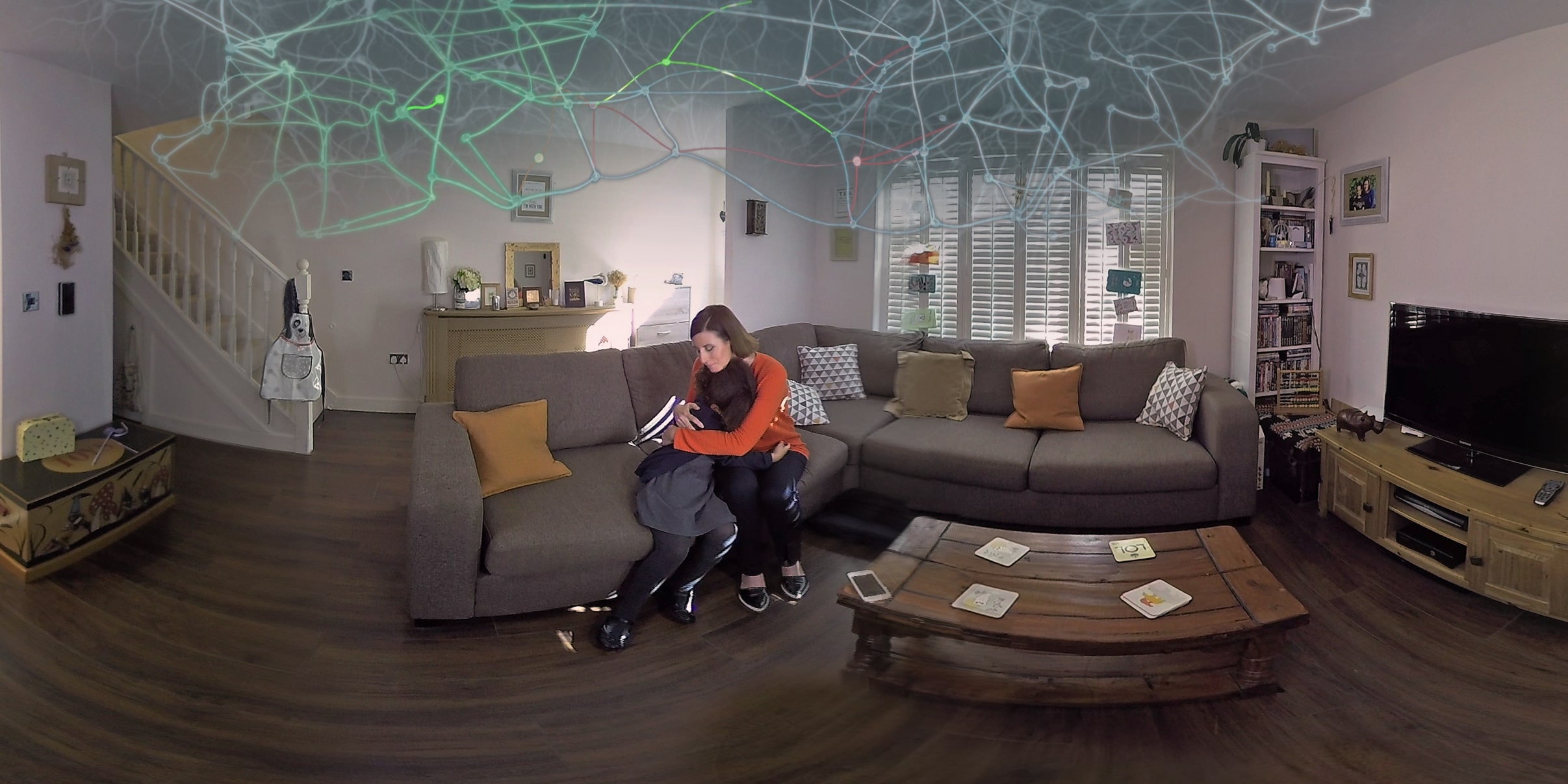 She then spots a dirty nappy on floor and her temper flares – she’s calling me “filthy” saying my hair is mess. Then she picks up the scissors and unsteadily lurches towards me, saying, “I’ll have to cut it off.”

A child’s voice at the end says: “I’ll never wash my hair.”

Pulling off the headset, I am shaken, stressed and slightly tearful.

The horrific scene is far from any experience I have ever had but seeing the neglect and abuse from small child’s perspective is truly shocking.

Helen explains the scene has been carefully crafted to address the “toxic trio” of drink, drugs and domestic violence which affects many kids who end up in care.

She tells me my reaction is common and says the harrowing nature of the VR experience means they have to be careful who sees it.

She says: “People often go into social work because of bad experience and we think that about 10 per cent of the people who watch this have trauma in their own background, so this could trigger mental issues. 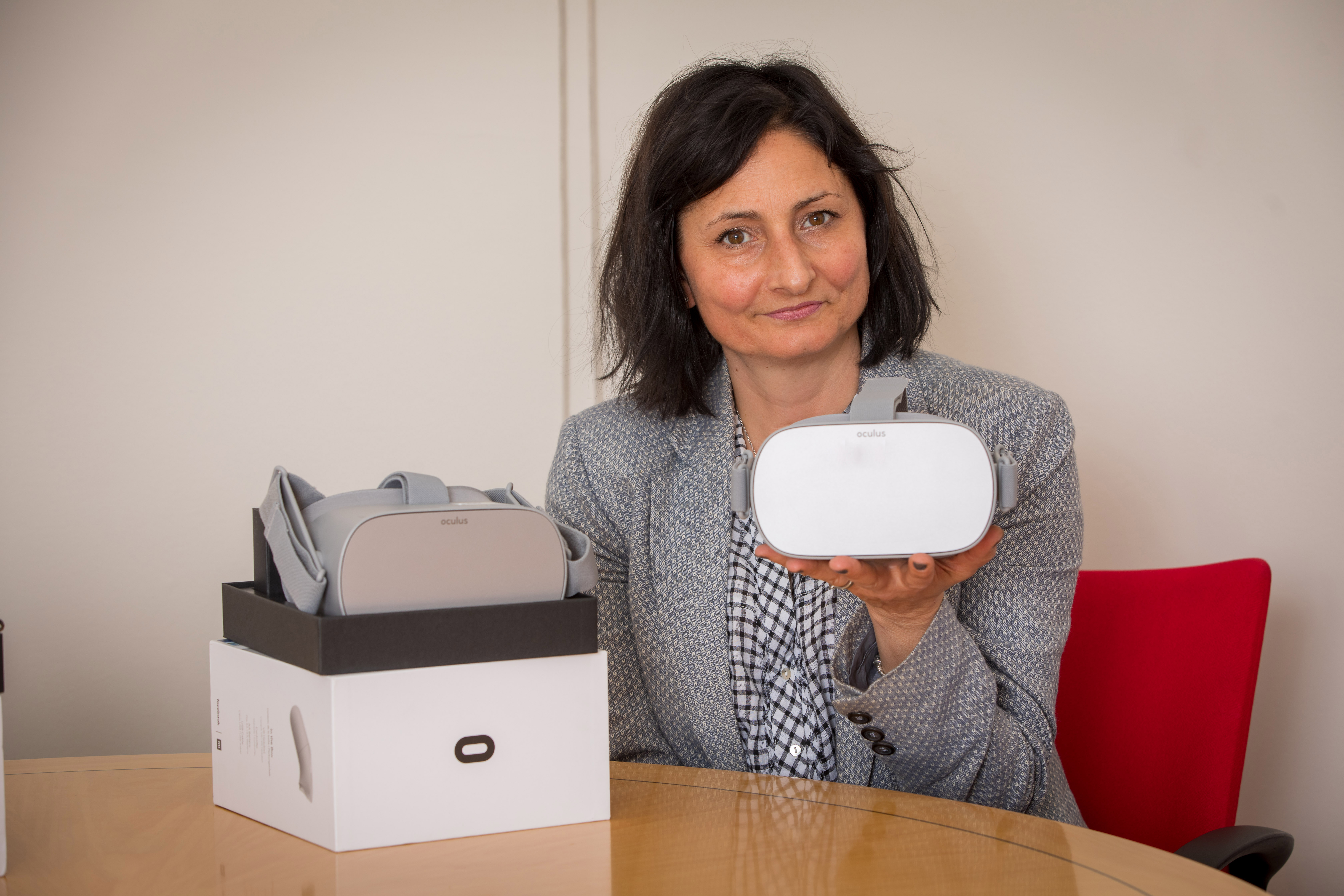 “Currently we only use this with a group of people who we know can handle it, like teachers and social workers, plus foster carers and adopters who have volunteered to take on a child with trauma. They need to understand what it is that they’re taking on.

“The perpetrators of domestic violence are often victims of it too so we have to be careful. What we don’t want to do is trigger people to a point where they can’t manage, because then everybody loses.”

'Focus on trauma not behaviour'

Another disturbing video, shown to potential foster parents, shows common experiences of abused kids, including a child watching a man pinning his mum up against the wall and drunkenly groping her in the middle of a party.

A further clip shows a boy attacked by his dad in a bathroom and lifted up by the neck, a young girl comforting a hungry baby sister after they were left alone by their parents and a girl being forcibly removed from her home.

Later segments show the original abuse victim as a schoolgirl, being branded “smelly” by school bullies and reacting with violence.

A teacher and a parent are then seen reacting to the incident in three different ways – ranging from angrily blaming the child to crouching down and empathising.

The first reaction triggers memories of early trauma and feelings of worthlessness which result in the child acting up.

“If everyone loses sight of the child’s traumatic background and focuses on bad behaviour it can lead to a foster placement breaking down,” says Helen.

“This puts the foster parents and social workers into the shoes of the child and helps them understand. Then they can get the support they need to keep the placement together." 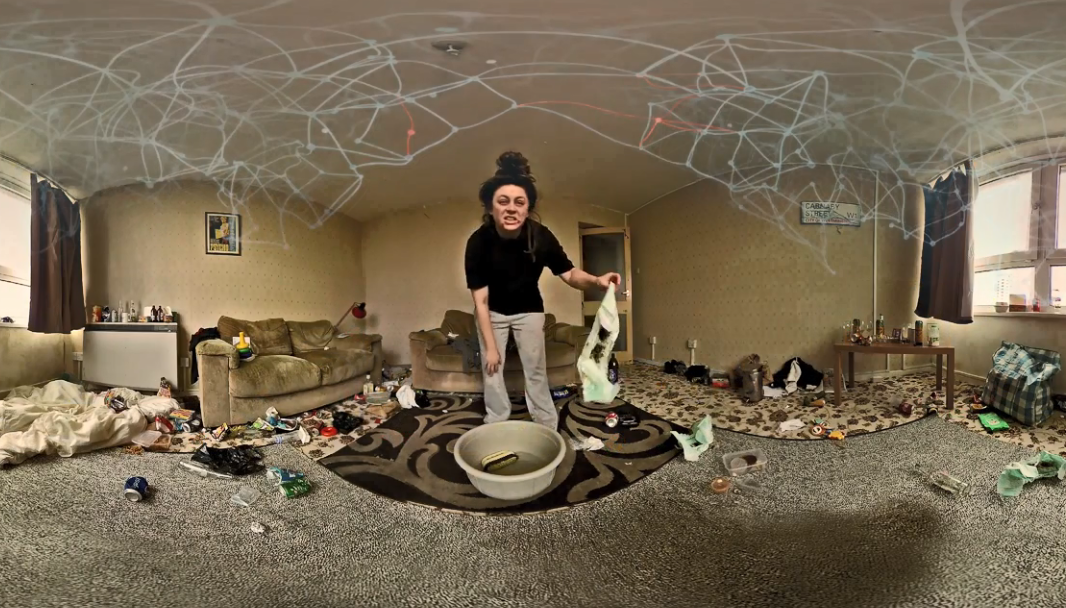 Mum-of-two Helen first came up with idea of using VR for social work after watching a film made for the carers of Alzheimer’s patients.

“It showed what it’s like to be in their shoes, to feel that sense of frustration when they don’t know where they are going or when they can’t remember where the teabags are. It had a real impact on me.”

The organisation now has 150 headsets which are being used by 30 local authorities and charities around the country and there has recently been huge interest from overseas.

Recent trials with hundreds of social workers found that 100 per cent would recommend the programme to a colleague and children's minister Nadhim Zahawi recently tried it and called it a "harrowing but I hope immensely powerful tool" in caring for troubled children.

A report also found foster placements that may have broken down and have stayed together as a result of the VR session.

Today I witnessed the virtual reality programme set up by Cornerstone which puts you into the inner world of a child suffering trauma and neglect. Harrowing, but I hope an immensely powerful tool for social workers. @markowers37 @cornerstonevr pic.twitter.com/rToYuhX0gx

And Helen is convinced it could cut youth crime.

“We know that 65 per cent of children in young offenders have been in the care system, so we know there will be a direct link between early life traumas and youth crime.

“We want to use this with young adults who are at risk of child sexual exploitation, getting groomed into gangs and county lines.

“Not only do you get the other person’s perspective but you also have the benefit of hindsight. You can see where things lead before they happen, for example putting kids in a courtroom or prison, so it’s very exciting.”

For my part, the harrowing scenes I witnessed will stay with me forever but I learned a lot about dealing with children too.

It made me think about the times I shouted at my kids and wished I'd handled it differently.

Not every parent will get the chance to take the child's eye view through virtual reality but for those that do, it will change their outlook for life.