Victoria's hotel quarantine inquiry has demanded new affidavits from key players, including Chief Health Officer Brett Sutton, as it attempts to get an answer as to who made the call to use private security. 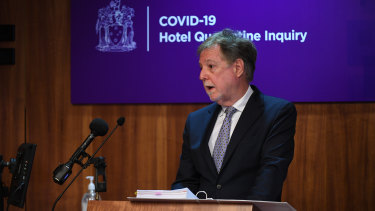 Mr Neal said "two discreet developments" have given rise to the hearing, being fresh phone records from key decision-makers and emails that called into question when Professor Sutton found out that guards were being used in the ill-fated program.

Mr Neal said the inquiry will seek affidavits from a number of people, including Professor Sutton, to address the new information.

Mr Neal told the inquiry on Tuesday that "it should be emphasised" that the relevant parties are being asked to address the new questions, and there was "no basis for inferring or speculating that any view has been formed about the veracity or otherwise" about the previous evidence that has been given to the inquiry before.

The chair of the inquiry, former judge Jennifer Coate, called the hearing as new evidence continued to emerge even after the last witness – Premier Daniel Andrews – finished in the witness box last month.

Last week The Age revealed that Chief Health Officer Brett Sutton authorised an email when hotel quarantine was set up that told the federal government that private security guards were going to be used in the program.

The emails contradicted Professor Sutton's evidence to the inquiry – he said he didn't know private security were involved until outbreaks of COVID-19 in late May – and were not tendered to the Board of Inquiry by the Department of Health and Human Services, who were required to provide all relevant materials.

Professor Sutton said over the weekend those emails had not “registered” with him.

Mr Neal said on Tuesday that two email chains involving Department of Health and Human Services officials have recently been submitted to the inquiry. 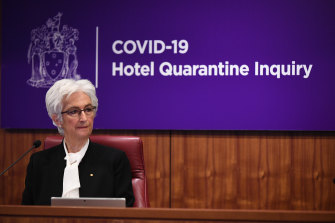 One chain began on March 30 – three days after planning for the hotels program started – and ended on July 2.

While DHHS told the inquiry they did not initially submit those emails to the inquiry because they did not consider them relevant, Mr Neal said they in fact go “to matters that occupied a very considerable amount of the board’s time” during the inquiry.

“You [Justice Coate] may consider it adds some weight in one direction or another to your deliberations as to who was in charge for the detention regime,” Mr Neal said.

Mr Neal said another email on March 27 that mentions plans to use private security, which included Professor Sutton in the email chain, has also been submitted to the inquiry.

Then there's the phone records saga.

About 10 days ago the inquiry requested phone records from Premier Daniel Andrews’ department, including his top public servant, Chris Eccles.

The records are about trying to get an answer as to who made the decision that private security should guard the hotels over, for example, the police or defence personnel.

The records revealed Mr Eccles had called then chief commissioner Graham Ashton on March 27, the day the hotel quarantine program was established, despite Mr Eccles telling the inquiry he did not speak with Mr Ashton.

Key with the phone records is who spoke to Mr Ashton that led him to send a text message in which he said private security would be used in a "deal" that was "set up" by the Department of Premier and Cabinet.

Mr Eccles remained adamant upon his resignation that he did not speak to Mr Ashton about the private security.