GP surgeries are rationing flu vaccines and making people between the ages of 50 and 64 wait until supplies are more robust.

The Royal College of GPs said people are being given the jab in phases, as signs are emerging the system is creaking under the pressure of the ambitious winter drive.

Health Secretary Matt Hancock pledged this year would see the most people vaccinated ever in a bid to reach 30million people and relieve the pressure flu patients put on the NHS, which is already bracing for a second wave of coronavirus.

High street chemists Boots and Lloyds have had to stop offering appointments as their services are sold out, and now doctors’ surgeries are facing massive demand.

Although the flu vaccine won’t protect people from Covid-19 it can prevent them getting flu, which may increase the risk of dying if you catch coronavirus at the same time, and stopping flu spreading can keep the elderly and vulnerable out of hospital.

Over-65s, pregnant women and those with serious long-term illnesses are usually prioritised for the vaccine because they are at a higher risk of complications from the virus. 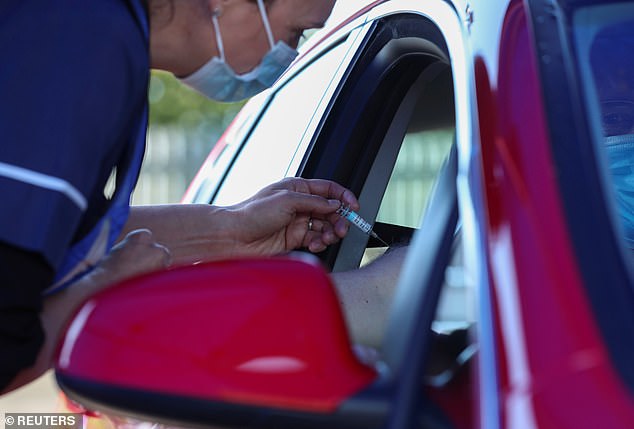 Health Secretary Matt Hancock pledged this year would see the most people vaccinated ever in a bid to reach 30million people and relieve the pressure flu patients put on the NHS, which is already bracing for a second wave of coronavirus (Pictured: A patient at a drive-through vaccine centre)

Head of the Royal College of GPs, Professor Martin Marshall, said on Sky News: ‘This is a significant problem – it does seem to be a greater demand than there are supplies.

‘The issue here is that we order our flu vaccines at least six months in advance. The orders were put in before the Covid crisis was recognised.

‘What we’re doing in general practice is prioritising those in greatest need. And that means people over the age of 65, people who have long-term health problems, pregnant women and young children.

‘So the new group of people that we want to vaccinate as a consequence of the Covid crisis, which is mostly people between the age of 50 and 64, are going to have those vaccinations delayed until the supplies are available.’

The Department of Health insists there is not a shortage of the vaccine and that it is ‘wrong’ to suggest there’s not enough to go around.

Matt Hancock has pledged that the country would have the biggest flu drive ever this year and reach 30million people, up from the normal 15million.

As part of this scheme, access to free NHS vaccines has been widened to include anyone over the age of 50 – but now they are being barred access by doctors.

The most at-risk groups will get access first, Professor Marshall said, and surplus jabs can be given to the expanded access groups.

Professor Marshall added that he could not see signs that 30million doses were available.

‘There seems to be enough for the original group, probably 15, 16, 17 million people at the moment, but at the moment the manufacturers are trying to produce more,’ he said.

‘It looks like they’re going to do so, but it does mean that those in the latter group – the younger group of people who perhaps are at lower risk – might have to wait longer before they actually get their vaccines.’

He urged people to ‘sit tight’ and they would get their jab eventually, adding that flu could be a ‘serious condition’.

Professor Marshall said: ‘What you need to do if you’re in that lower risk group is hold tight for now.

‘If you’re going to get it from your local pharmacy, your pharmacy will also tell you when it’s available, so hold on for now and it will be available, and hopefully before Christmas.’ 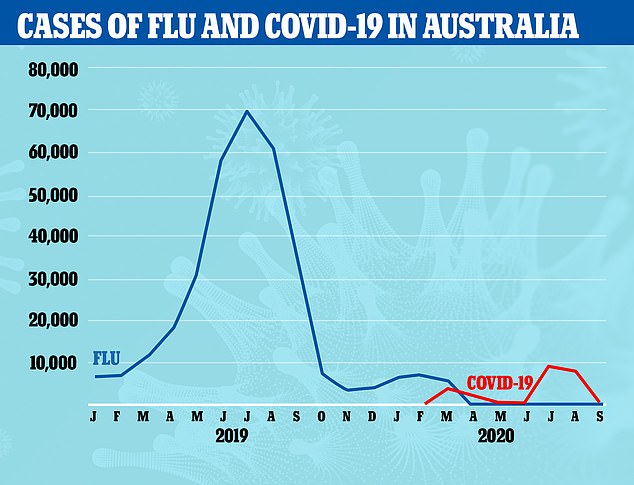 Australia, which faces a similar flu outbreak to the UK, saw very few flu infections this winter. This suggests the UK may dodge a ‘double-whammy’ of coronavirus and the flu

He said: ‘The emphasis has always got to be on the existing high-risk groups and getting them well served and the uptake high before we move into the 50 to 64-year-olds who are lower risk.

Who is eligible for a free flu vaccine?

Health officials are trying to ensure everyone who needs a flu vaccine can get one this autumn.

The jab will be made available to 30million people for free – in the largest British vaccination programme ever undertaken.

It can be booked through visiting your local GP or pharmacy.

The Department of Health has said it is available to the following Britons:

People between the ages of 50 and 64 – who are eligible to get vaccinated for free for the first time – will be contacted ‘later in the year’, the NHS says.

‘This actually fits with the likely pattern of arrival of flu vaccine stocks.’

He said some GP practices also prefer to have staged deliveries ‘simply because of fridge space’.

A Department of Health and Social Care spokeswoman said: ‘There is no national shortage of the flu vaccine – it is currently available in pharmacies and GPs across England and it is wrong to suggest otherwise.

‘There are enough doses for 30 million people. The vaccine is already being delivered for those in at-risk groups, including the over-65s, and this will continue throughout the winter months.’

Professor Marshall’s comments come as high street pharmacy Boots has suspended bookings at branches across the UK. LloydsPharmacy is only allowing bookings for customers that had already registered an interest online due to ‘unprecedented demand’.

A spokesman for Boots said: ‘We have seen more people than ever booking early to get their flu vaccinations, and due to the level of demand and limited stock that we have available, we made the decision to pause taking any new bookings for our private and NHS under 65s Flu Vaccination Services earlier this week.’

They said the suspension was to ‘make sure we can vaccinate the patients who have already booked their appointment with us’.

The Department of Health and Social Care controls an emergency stockpile of jabs but this has yet to have been made available to surgeries.

This is expected to change in the coming weeks.

Graham Slesser, a 65-year-old accountant from Doncaster, tried to book a flu jab from his local GP yesterday, having been turned away by his high street pharmacy.

He said: ‘I was told there were 200 people ahead of me and I might not get an appointment until the end of October.’

Amid fears over a ‘double whammy’ hitting the health service Professor Paul Hunter, an infectious disease expert at the University of East Anglia, previously told MailOnline Britain ‘almost certainly’ will not see two consecutive waves of flu and coronavirus.

‘There’s been virtually no influenza around in the southern hemisphere during their flu season this year and the reason for that is obvious,’ he said. ‘The things we’re doing to control Covid are even more effective on influenza.’

Dr Ed Hill, a post-doctoral researcher working on modelling the spread of disease at the University of Warwick, said measures to inhibit the spread of coronavirus would also ‘disrupt’ influenza transmission.

‘The combined interaction of non-pharmaceutical interventions, targeted at reducing Covid-19 transmission but also impacting influenza transmission, and a wide-spread and intensive vaccination campaign may reduce the scale of seasonal influenza this winter,’ he said.

Australia and New Zealand — whose winter occurs during the UK’s summer — have given hope that Britain will not inevitably be hit by the flu and Covid-19 at the same time.

So far this year Australia has recorded only 21,000 influenza infections, fourteen times lower than last year’s figure at 313,000.

New Zealand didn’t see one influenza case since screening began in June. Last year about 57 per cent of samples collected by GPs were positive.