From the Archives, 1987: Meryl Streep in Melbourne to talk Lindy Chamberlain

First published in The Age on September 9, 1987

Meryl Streep, the Oscar-winning actress, spoke yesterday of how the story of Mrs Lindy Chamberlain, whom she will portray, hit her like a kick to the stomach. 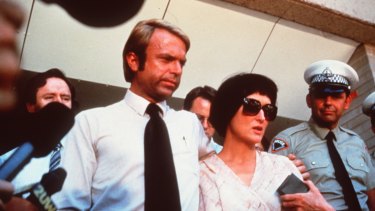 Sam Neill and Meryl Streep as Michael and Lindy Chamberlain in the film Evil Angels.

At first, she could only read about 60 pages of ‘Evil Angels’, the book of the case by a Melbourne author, John Bryson. Six weeks later, she picked it up again. “I thought that anything that affected me that way was potentially an important story to be told,” she said at a news conference in Melbourne.

Ms Streep talked at the conference with the film’s makers and writers. Sitting on a stage before a crowded room, she had her first meeting with Mr Bryson to discuss her role, one she finds upsetting. “I’ve put off thinking about it a lot,” she said.

Meryl Streep once said she knew she had made it when her face appeared on more magazine covers than the Ayatollah. At the Hyatt on Collins Hotel yesterday she said her face was too well known to be seen in mid-Manhattan but she felt secure in Melbourne, although she did ask news crews not to try to film her young children.

Her appearance was, loosely, casual chic: turquoise and silver drop earrings, a bright blue polo shirt with a red collar under a shiny black bomber jacket. There were hints of nervousness, but her quickness, feelings and humor shone through.

More than many people, she was able to express what the story meant to her. “The reason it interested me is because it’s a danger we all face: judging people through the electronic media in 30-second snatches on the news. You see someone and you don’t like the set of their eyebrows, and whether they cry or not.

“I’m very interested in the idea that there is a set of appropriate responses to any given tragedy. Being an actress, I’m interested in investigating emotions, and I have found in other parts that I have played that there are all sorts of surprises in human behaviour. Just because someone doesn’t act the way you would expect them to on the television that night may not be a fair indication of who they are and the size of their emotion and feeling.”

She said it was difficult playing someone who exists. “I’ve done it before, when the people I was portraying were not around to comment on how well I’d done. Now I’m playing someone who exists right now, in this world, and it’s quite a responsibility to do well by her.” She hopes to meet Michael and Lindy Chamberlain, a prospect she finds daunting because of her role in the film.

Her first reply to the inevitable question about why she took the role, was brief. “Because it made me mad,” she said. “I didn’t really follow the case in America, but I read John Bryson’s book, and then I asked for everything I could get on the case and read a stack of clippings and press releases this thick, transcripts from trials, the Morling report, and the more I read the more I wanted to do the part.”

After greeting reporters with a “G’day”, she attempted a further touch of Strine, saying something like “Yiss, I haeve” when asked if she had an attitude towards the guilt or otherwise of the Chamberlains. Giggling a little, she said the Australian accent was probably the hardest she had ever tried.

Ms Streep and her husband, Don Gummer, a sculptor, have three children, aged seven, two and 15 months. Her feelings for Mrs Chamberlain in her loss of nine-week-old Azaria were a trigger to her wanting the part. “I’m sure that’s the part of what hooked me into it. I feel like I knew what those feelings were.”

Everything she read made her believe that a dingo took Azaria, but she was cautious when asked in Mrs Chamberlain had been badly treated by Australia’s courts. “I think she was mishandled, yes.”

She was ready for domestic criticism about a foreign actress getting a plum role in an Australian story. “There was that criticism in Denmark when I did, you know, Isaak Dinessen, and I’ve played English people and I was criticised for that. You know, I feel very privileged to be able to play women in circumstances other than the ones in which I grew up.”

The makers of the film came close to being accused of exploiting the story when a reporter asked in there could be an element of voyeurism in the film. She replied: “I think that they (the Chamberlains) are interested in having what they feel is the truth of this situation put out because, from what I understand, not everybody read the Morling Commission report… People didn’t read it with the same appetite with which they followed the trial or the inquests.”

With 350 speaking parts, the $20 million ‘Evil Angels’ is the biggest film Meryl Streep has been in. She has no doubts about how the world will see Mrs Chamberlain. Asked if the film would be “too sympathetic” to Mrs Chamberlain, Ms Streep said firmly that there could be no such thing.