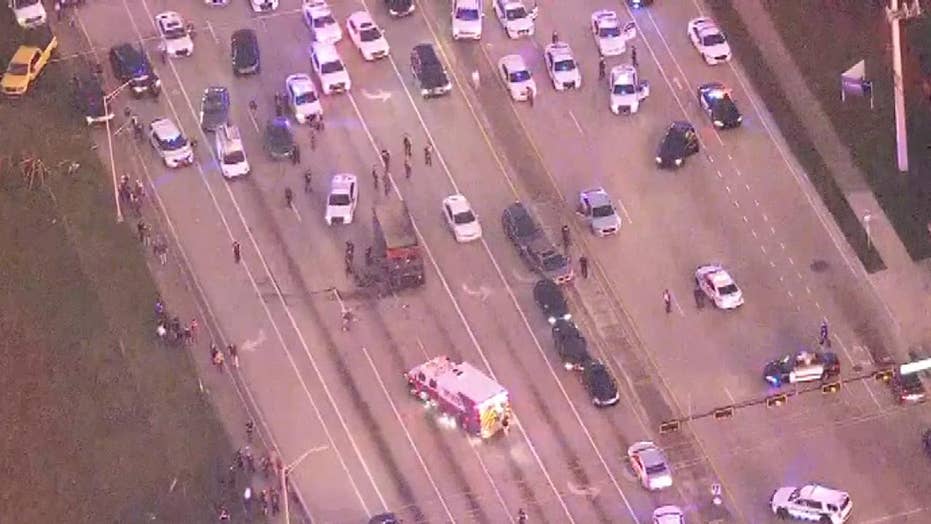 Officers converge on a vehicle stolen by suspects following the armed robbery of a jewelry store.

Nearly an hour-long police chase ensued in Coral Gables, Florida, on Thursday, ending in gunfire and multiple people shot dead, according to police.

Coral Gables police said they were investigating a robbery at Regent Jewelers at 386 Mile. Shots were fired and the two alleged robbers jumped into a UPS truck and fled the scene, taking the delivery driver with them. A woman was shot in the head at the jewelry store, according to Local 10 News. Her condition is unknown.

The hijack “turned into a hostage situation with the UPS driver,” Coral Gables Police Chief Ed Hudak said, according to the Sun-Sentinel.

The UPS truck made its way up Interstate 75 with dozens of police cars on its tail. Traffic came to a standstill as terrified drivers waited for the crazed truck driver to pass.

Once the UPS truck was boxed in, more shots were exchanged between law enforcement and the fleeing robbers. At least one person from the truck was taken away from the scene in an ambulance and another inside the truck appeared to be wounded.

The UPS driver could be seen sitting in the truck on the floor near the center wheel during live video of the chase.

Miramar police tweeted that the heist ended in "multiple fatalities," but that there were no law enforcement fatalities.

A man could be seen attempting to exit the truck on the passenger’s side during the hail of gunfire, but it’s not yet known whether he was a UPS employee or one of the suspects.