Ex-Zimbabwe leader Mugabe to be buried at national monument 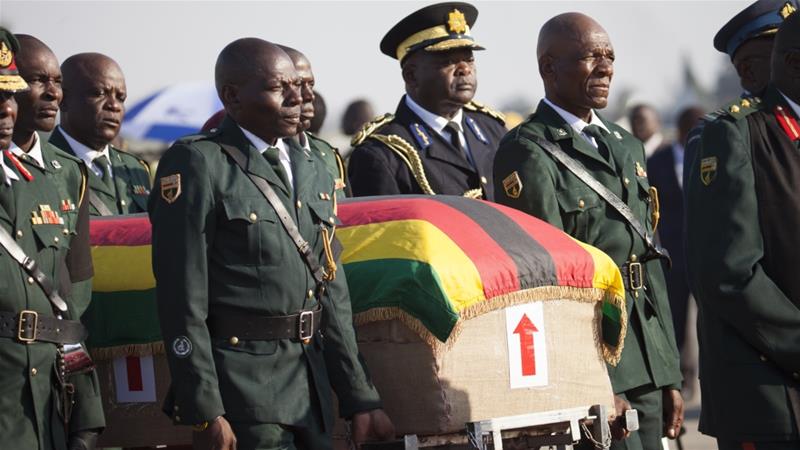 Former Zimbabwe President Robert Mugabe will be buried in “around 30 days” at a monument for national heroes in the capital, Harare, a family spokesman said.

The decision to inter Mugabe at the state burial site is the latest turn in the tussle between his family and President Emmerson Mnangagwa, Mugabe’s once-trusted deputy who helped remove him from power in late 2017.

On Thursday, the family had said that the former Zimbabwe president, whose body was flown back from Singapore on Wednesday, would be buried in his home town in a private ceremony.

But on Friday, family spokesman Leo Mugabe said it had been decided the deceased would be buried at Heroes Acre after consultations with influential traditional chiefs.

“The government and the chiefs went to the Heroes Acre, showed each other where President Mugabe is going to be buried, and that place would take about 30 days to complete,” Leo told reporters at the family’s Blue Roof house.

“So what that means is the burial will take that long,” he added.

Leo said that an official ceremony would be followed by a private family event at the monument to heroes of the liberation war against white minority rule.

The former president has been lying in state in Harare since Thursday after the government announced three days of national mourning. His body was on view at Rufaro Stadium for a second day on Friday.

A stampede on Thursday injured several people trying to view it.

Some of Mugabe’s relatives have expressed bitterness at the way former close associates, including Mnangagwa, overthrew him after 37 years in power amid mass protests against his rule.

While some still hail Mugabe as a liberator, others recall the repression and economic mismanagement that brought Zimbabwe to its knees.

Mnangagwa, a one-time protege of Mugabe, called the former president a “national icon” after his death.

Mugabe fired Mnangagwa in 2017, in what many believed was an attempt to position his wife Grace to succeed him.

The wrangle over the burial highlighted the lasting acrimony between Mnangagwa and Mugabe’s widow, Grace, and other family members. Mnangagwa met with them to try to resolve the burial dispute and on Thursday said his government would respect the family’s wishes, adding they have “the full support of the government”.

On Friday, foreign dignitaries were due to start arriving in Harare ahead of a state funeral planned to be held at the country’s National Sports Stadium on Saturday.