This is the dramatic moment an Easyjet plane carrying British holidaymakers was intercepted by Spanish fighter jets.

Flight EZY8303 was on its way from Gatwick to the holiday island of Menorca on Sunday when passengers spotted an F-18 fighter out of the window.

Video shows how the fighter ‘tipped’ its wings at the Easyjet pilot – a sign which means ‘follow me’ – before escorting the plane to Menorca airport.

The jet, which had taken off a little after 1pm, landed around 45 minutes at 4.54pm but passengers were reportedly held on the tarmac for four hours while ‘precautionary security checks’ were carried out. 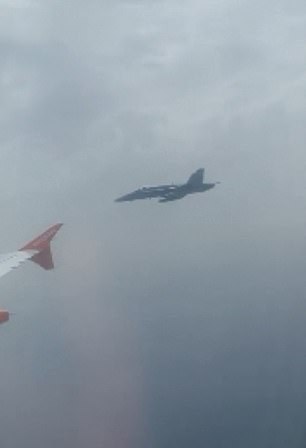 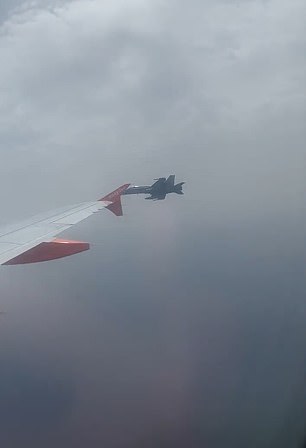 An Easyjet spokesman said all passengers had since disembarked, without saying what had triggered the security alert.

‘The safety and security of passengers and crew is always easyJet’s highest priority and we would like to thank passengers for their understanding,’ the airline added.

Fighter jets typically intercept civilian planes where there is believed to be a risk to the safety of the passengers or crew.

Most intercepts are the result of loss of communication with an aircraft.

In the event ground control cannot communicate with the pilots of an aircraft despite several attempts, fighters will be scrambled to intercept.

Another reason is an actual or suspected threat has been reported on board the aircraft – bomb threats, suspicious objects, or threats by passengers towards the crew will trigger this response.

All fighter intercepts will happen in pairs, with both jets approaching the civilian plane from behind.

One jet will then remain at the tail while a second pulls alongside and communicates with the civilian captain.

This can either be via radio or, in the event the radios are not working, by signalling through the window.

A wing-tip manoeuvre will tell the captain of the civilian aircraft they have been intercepted and should follow the fighters to the ground.

Typically, that will mean landing at the closest airfield available – which may be different to the scheduled port of arrival, depending where along the route the intercept happened. 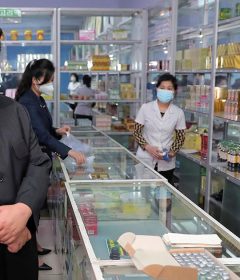