Nightclubs may be left without smoke machines when they reopen because all of the dry ice will have been used to transport the coronavirus vaccine, a scientist has suggested.

The Pfizer vaccine needs to be stored at -70C (-94F), about four times colder than a household freezer, before it is given to patients to ensure it remains effective.

With coolers in GP surgeries unable to reach this ultra-low temperatures, ministers will turn to dry ice – which is -78C (-108.4F) on average – as a means to safely store and transport the vaccine.

But Dr Alexander Edwards, an expert in how frozen goods are transported who is based at the University of Reading, said this could leave night clubs without their smoke machines when they are finally allowed to reopen.

Dry ice is a vital ingredient for them because it gives off billows of white mist – or ‘smoke’ – when it is heated rapidly, creating the dramatic effect.

It comes as the Government waits for regulators to approve the Pfizer vaccine for use in the UK, with 10million doses set to arrive before the end of this year.

They will be offered to care home workers, NHS staff and all those over 80 first, with a second batch earmarked for the wider population.

The Queen and the rest of the royal family have been told they won’t be able to jump the queue, and will have to wait in line for the jab. 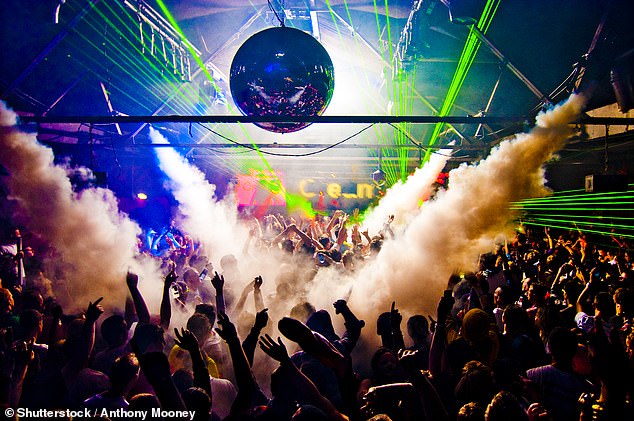 WHAT IS DRY ICE?

Dry ice is carbon dioxide which has been cooled and pressurised until it becomes a solid.

It has an ultra-low temperature around -78C (-108.4F), meaning it is commonly used as a cooling agent in the transport and storage of foods and other products.

Why is dry ice used in nightclubs?

Dry ice is commonly used in nightclubs for smoke machines.

When it is heated rapidly the ‘ice’ gives off a white mist – or ‘smoke’ – producing the cinematic effect at the venues.

Without the dry ice, smoke machines are set to remain switched off – should clubs be able to re-open.

Where is dry ice used?

The cool product has many uses, as well as for smoke machines in night clubs.

Industry has many uses for it, including as a cleaning fluid, and to help loosen floor tiles before replacing them.

Nightclubs have been shuttered since the coronavirus pandemic first struck in March. A date has yet to be set for when they can reopen.

Suggesting clubs could reopen without some of their added props, Professor Edwards said demands for dry ice mean they may have to ‘cut down’ on smoke machines.

‘There are lots of little things that become terribly important that we weren’t expecting to (following the discovery of a potential vaccine),’ he told BBC Radio 4’s Today programme.

‘They may be cutting down on smoke machines in nightclubs – although that’s not a problem when they’re all closed.’

Concerns have been raised over how the Pfizer vaccine will be distributed safely because most GP surgeries do not have freezers capable of keeping products at this low temperature.

There have also been reports that containers it is kept in should only be opened at most twice a day in order to protect the vials.

But pouring cold water on the fears, Dr Edwards said he thought it would likely still be safe to use the vaccine a ‘few days’ after it was thawed.

‘The one subtle difference with this vaccine is because of the nature of the actual vaccine product it’s not terribly stable if you thaw it,’ he said.

‘It’s good for a few days probably to be vaccinated with – but the best way to store it is at -70C (-94F) which sounds pretty dramatic but that’s actually the temperature of dry ice.’

The vital product – which is formed of carbon dioxide that has been cooled until it becomes solid – has been used for years in shipping and transporting products that need to be kept at low temperatures, as well as in nightclubs.

There have previously been shortages of dry ice, including in 2018 when online retailers were forced to cancel food deliveries.

The crisis hit Europe in 2018, after a number of mainland fertiliser plants – which make dry ice from gases given off by their waste product ammonia – closed for routine maintenance.

Ocado had to suspend deliveries of some items, while Amstel and Coca-Cola also had to scale back production until fresh supplies arrived. 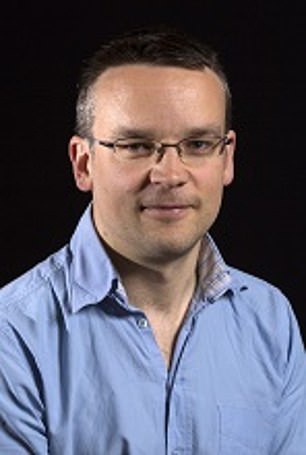 It is feared a rush for dry ice could trigger a similar problem this year and into next year, should the Pfizer coronavirus vaccine be approved.

Britain’s supplies of the vaccine will come from Puurs, in Belgium, which has hundreds of large ultra-cold freezers ready to store millions of doses before they can be shipped around the world.

When they arrive on Britain’s shores they will be packed into hundreds of dry-ice lined suitcase-sized containers, capable of keeping them at the ultra-low temperatures for up to ten days providing they are not opened.

Pfizer officials have said the dry ice will need to be replaced once they arrive in the UK, and that the cases should only be opened for a minute at a time.

It did advise they should not be opened more than twice a day, although this advice may change according to officials.

Before they are administered the vials of vaccine will be defrosted and stored at between 2C (35.6F) and 8C (46.4F) in a freezer.

GPs are earmarked to deliver the doses, which they will have to do on top of their daily duties according to officials.

Health Secretary Matt Hancock said the distribution will be a major task for the NHS, but that he is confident it will be possible.

One senior Tory warned yesterday that the government faces a catastrophic public backlash if it makes a mess of the vaccine rollout. ‘If we get this wrong, we’re toast,’ they told MailOnline. The MP said the PM should hand the reins to a senior military figure, who should also be the public face of the distribution effort.

They said: ‘If we hadn’t had the military involved someone would still be drawing up outline planning for the Nightingale hospitals. They can set up wards in theatres of war. The military are trusted. They have no axe to grind and they have authority. They are impartial servants of Crown and country.’