Saved from the dinner plate: Dozens of dogs crammed into rusty cages ready to be butchered are rescued from a Chinese live animal market

Dozens of dogs waiting to be butchered on order at a live animal market in China have been rescued as the country celebrates its annual dog meat festival, MailOnline can reveal.

The dogs were found ready to be slaughtered in broad daylight by traders in Nanning, the capital of southern China’s Guangxi Province, according to sources.

The province is home to the annual Yulin dog meat festival, which takes place in the nearby city of Yulin. 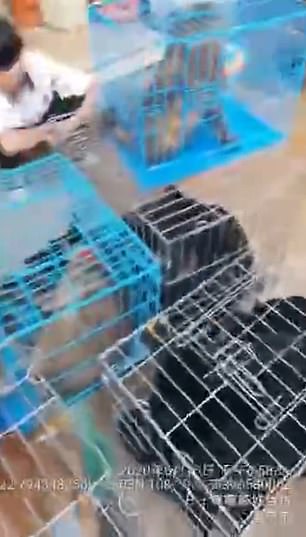 An animal campaigner said she had rescued 30 dogs waiting to be butchered at the ‘live poultry’ section of the Wu Yi Farmers’ Market in Nanning, southern China’s Guangxi Province 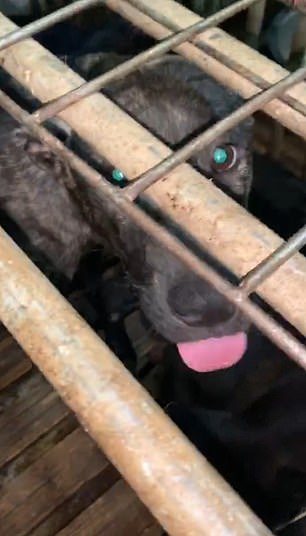 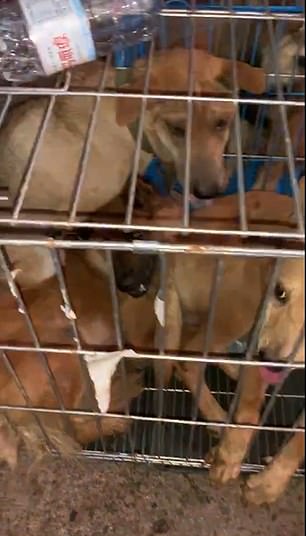 The dogs were crammed into cages to be slaughtered on order at the market, according to the source. She claimed that customers could select the live dogs before ‘placing their order’

This year, the controversial event opened on the summer solstice despite the coronavirus pandemic and the government’s recent call for people to treat dogs as ‘companion animals’.

Du Yufeng, a long-time Chinese animal rights campaigner, told MailOnline that she came across those dogs at the ‘live poultry’ section of the Wu Yi Farmers’ Market in Nanning on Tuesday.

She claimed that customers could select live dogs from rusty cages before ‘placing their order’. Vendors would then kill the chosen dogs on site. 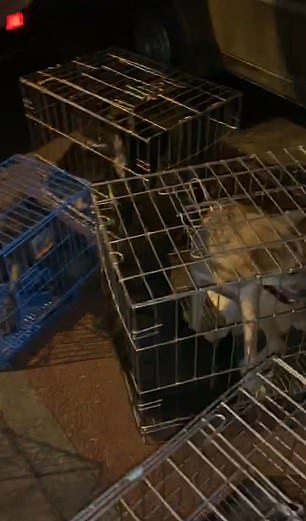 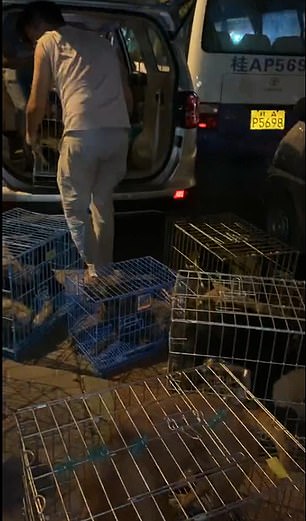 The saviour, long-time animal rights campaigner Du Yufeng, said she bought the dogs alive from the traders after negotiating with them before hiring a car to take the pooches to safety

Ms Du said she bought a total of 30 dogs alive from the traders after negotiating with them before hiring a car to take the pooches to safety.

She is currently transporting them from Nanning to a shelter in Guangyuan, which is some 900 miles away in Sichuan Province. 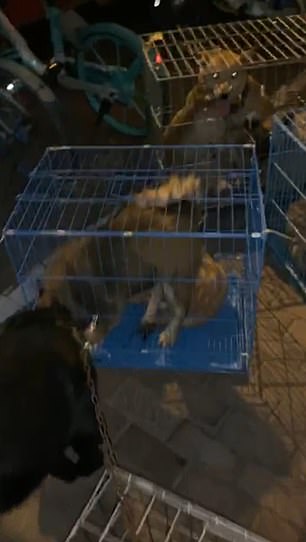 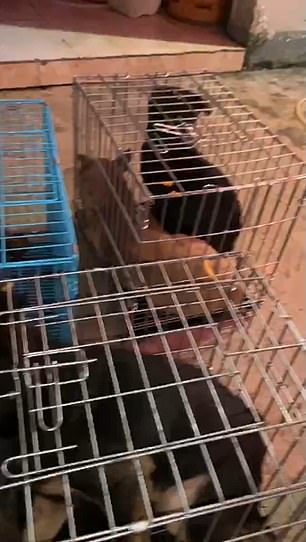 The animals will find a temporary home at the Bo Ai Animal Protection Centre, which was founded by Ms Du. The shelter is located in Guangyuan, some 900 miles away in Sichuan

One video clip supplied by Ms Du shows her looking after the dogs in front of a market stall after purchasing the animals.

Another video shows the rescued dogs being carried onto a minivan to be taken into safety by workers.

Ms Du noted that the van had to make several trips to move the dogs from the market to suburban Nanning before they could board a bigger van together to be driven to Guangyuan.

The animals will find a temporary home at the Bo Ai Animal Protection Centre, which was founded by Ms Du. 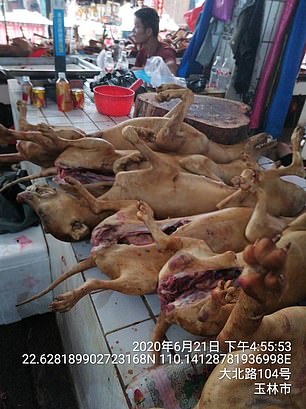 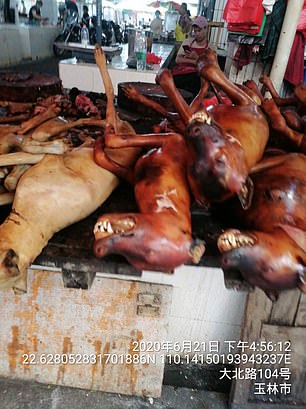 Pictures supplied to MailOnline show butchered dogs being placed on the counter of market stalls in Yulin, China, as the city celebrated the summer solstice with the annual festival. ‘This year’s dog meat festival is the same as before,’ said Du Yufeng, an animal rights campaigner 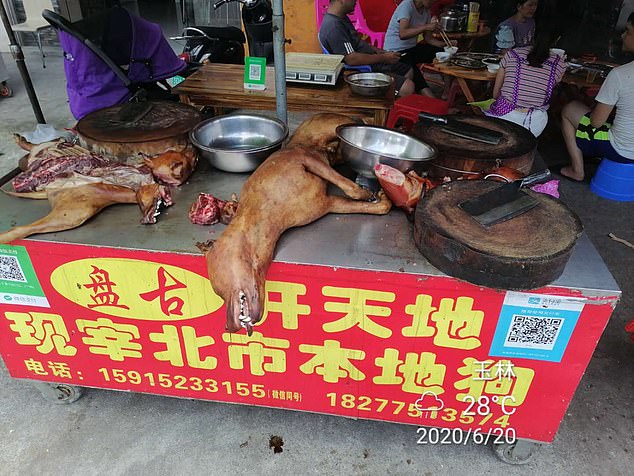 The annual 10-day dog meat festival celebrates the summer solstice and usually attracts thousands of visitors, many of whom buy dogs for the pot that are on display in cramped cages

China’s central government last month signalled that it could ban canine meat from the dinner table after removing dogs from its official list of livestock.

However, the government is yet to issue an order to forbid the eating of dogs in the country.

The Chinese Ministry of Agriculture and Rural Affairs called for ‘some traditional customs about dogs’ to change in the country and stressed that dogs were ‘companion, rescue and service animals’.

Two Chinese cities, Shenzhen and Zhuhai, have banned the eating of dogs in the wake of the coronavirus pandemic.

In late February, China issued a temporary ban on all trade and consumption of wild animals – a practice believed responsible for the global crisis. 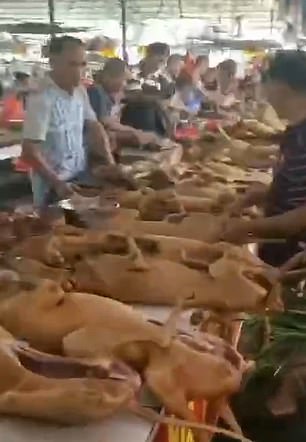 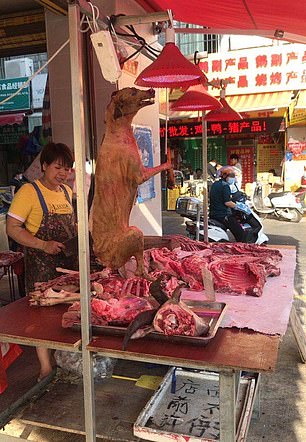 Activists said the city’s major dog meat trading hub, the Dongkou Market, was busy. They said they saw vendors chopping up rows of slaughtered dogs for customers without face masks 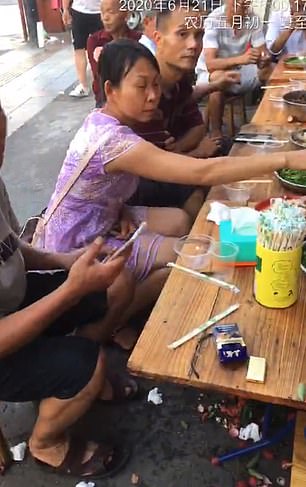 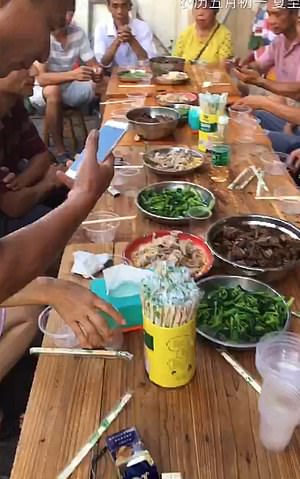 Despite those official moves and concerns over the spread of COVID-19, the Yulin dog meat festival opened on the summer solstice ‘as usual’, according to Ms Du.

Another clip shows local diners flaunting social distancing rules to gather and enjoy dog meat on the side of a road.

Ms Du was in Yulin at the weekend with six other activists to protest against the event.

They visited the Public Complaints and Proposals Administration of the Guangxi Province in Nanning in the following days and handed in a petition to demand officials ban the festival once for all.

‘The epidemic is so serious, and people here are still gathering to eat dog meat. Why are they still doing it and why the police are still allowing the locals to do it and even protecting them? These messages need to be heard,’ Ms Du urged. 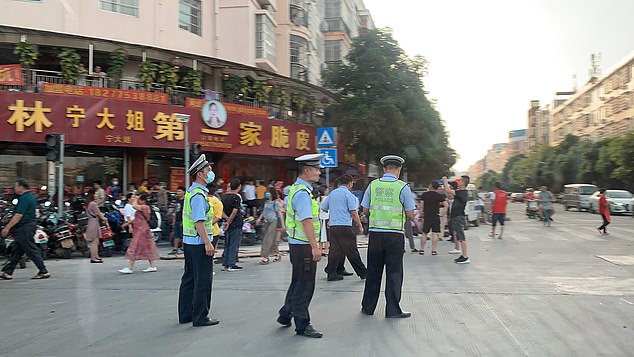 A picture supplied to MailOnline shows police officers patrolling outside Yulin’s No.1 Crispy Dog Meat Restaurant during the festival. The restaurant bills itself as an ‘internationally renowned’ restaurant serving dishes made with ‘healthy dogs carefully raised by farmers’ 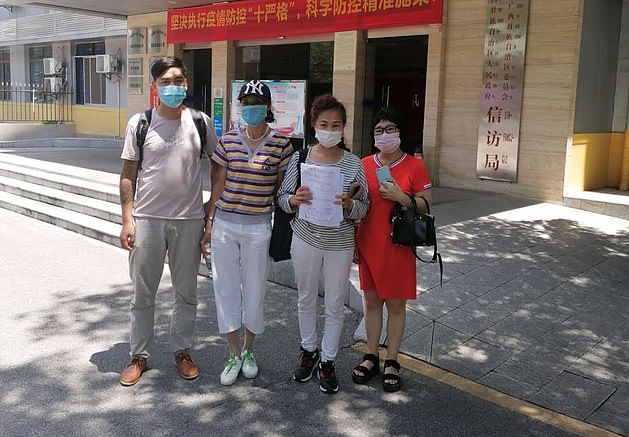 Ms Du and other activists pose for a picture outside the Public Complaints and Proposals Administration of the Guangxi Province. They visited the authority to urge it ban the festival

Other accounts, however, suggested that even though the festival was still holding this year, its size was smaller than before.

Restaurant workers involved in the week-long event, which they say started Sunday and has been renamed the ‘Yulin Summer Solstice Festival’, told AFP that attendance was down.

‘The number of arriving customers has dropped a lot,’ said a man surnamed Chen.

He said the dog meat restaurant where he works would open as normal this festival without any special events or pricing like in past years. 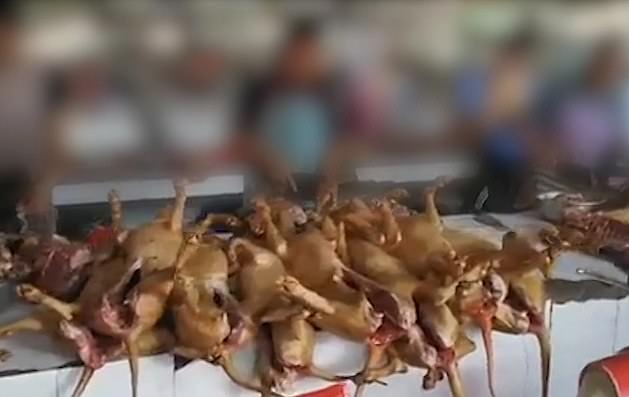 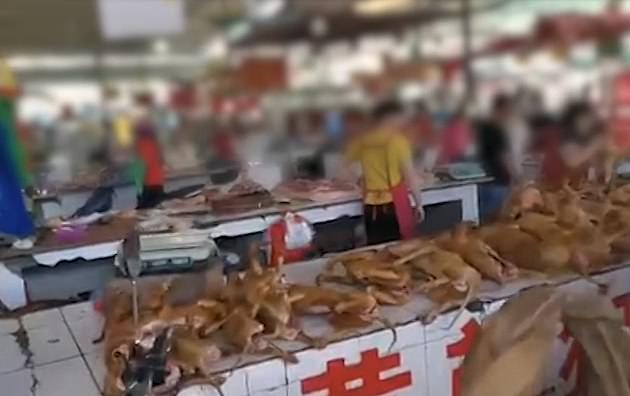 According to insiders, most of Yulin’s dog meat stalls and shops scattered around the city have relocated to one centralised area called Nanchao market ahead of the annual dog meat festival 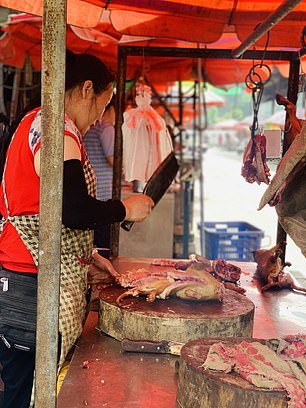 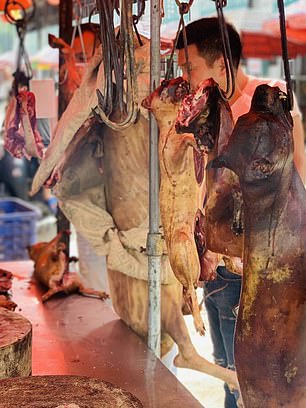 The pictures and videos were taken after Beijing last month removed dogs from its official list of livestock. Officials called for ‘some traditional customs about dogs’ to change in the country

Some posts on the Chinese social network Weibo called for the festival to be cancelled entirely after COVID-19 and a recent fresh outbreak of the disease in Beijing linked to a wholesale food market.

‘Is it not enough that (the festival) is infamous throughout the world? Where will food safety become a reality… Stop this damn festival at once,’ one user wrote.

Dog meat is traditionally believed to be good for the health in certain parts of China, but the habit has been in steady decline as more and more affluent urban dwellers choose to keep the animals as pets.

The government is drawing up new laws to prohibit the wildlife trade and protect pets, and campaigners are hoping that this year will be the last time the festival is held.

‘I do hope Yulin will change not only for the sake of the animals but also for the health and safety of its people,’ said Peter Li, China policy specialist with the Humane Society International, an animal rights group.

‘Allowing mass gatherings to trade in and consume dog meat in crowded markets and restaurants in the name of a festival poses a significant public health risk,’ he said.

Zhang Qianqian, an animal rights activist who was in Yulin on Saturday, said it was only a matter of time before the dog-meat festival was banned.

‘From what we understand from our conversations with meat sellers, leaders have said the consumption of dog meat won’t be allowed in future,’ she said.

‘But banning dog-meat consumption is going to be hard and will take some time.’