Detective to contest charges over release of Dani Laidley photographs

A detective will contest charges including misconduct in public office over the alleged circulation of a photograph of former AFL coach Dani Laidley that was taken inside a police station.

Detective Leading Senior Constable Murray Gentner is one of at least three officers facing criminal charges after an investigation was launched to determine how images of Ms Laidley were circulated after they were taken inside the station. The images entered the public domain and were published on social media and in some media. 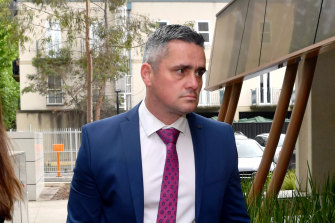 Ms Laidley, the former North Melbourne coach and player, was interviewed inside St Kilda police station in May last year after she was arrested for stalking.

A mugshot and a photograph of Ms Laidley being interviewed by two officers, while she wore a wig and make-up, were among the images circulated.

Charge sheets allege the detective distributed at least one photograph of Ms Laidley and other information to other men, including the comment “now a full blown ice head and tranny”. 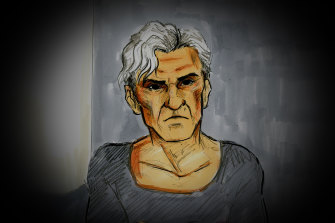 A court sketch of Dani Laidley from last year.Credit:Nine News

Up to eight police officers will be called as witnesses in a contested hearing to start on February 23, and Mr Carr said the three-day hearing would focus on the disclosure, access and circulation of the images.

“A lot of facts won’t be in dispute, but there will be some issues about what my client accessed and what others accessed,” Mr Carr told magistrate Andrew McKenna during Friday’s administrative hearing. A magistrate alone will rule in the detective’s case and decide the verdict.

Detective Leading Senior Constable Gentner’s decision to fight the charges comes after Constable David Hall this year confirmed he would also take his charges to a contested hearing. Constable Hall is charged with two counts of disclosing police information without reasonable excuse and is listed to appear in a contested hearing in May.

A third officer, Senior Constable Shane Reid, is due to face court later on Friday.

Victoria Police’s investigation resulted in dozens of officers facing internal discipline and at least six being ordered to pay up to $3000 compensation to Ms Laidley, while more than 200 officers and force employees were cleared of wrongdoing.

Ms Laidley this year initiated civil action to sue Victoria Police over the incident and alleges officers acted with malice and used derogatory language to describe her in an internal message group. Her lawyers have said the release of the photographs caused her considerable distress.

Ms Laidley pleaded guilty to stalking and was put on a good behaviour bond without conviction after she admitted making dozens of calls and text messages to another woman over a week, and watching and photographing her from outside her home. Ms Laidley spent more than a week in custody before she was bailed.

She has since been charged with breaching a court order and is to appear before a magistrate next month.

Detective Leading Senior Constable Gentner was previously recognised by Victoria Police as its detective of the year, and was a central witness in the coronial inquest into the 2017 Bourke Street tragedy, as he pleaded with James Gargasoulas on the phone to hand himself in, before the driver ran down and killed pedestrians. 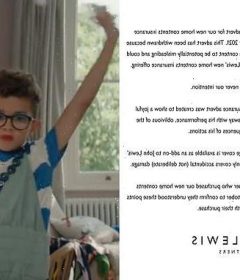