Barack Obama knows how to win presidential elections. He won twice, in 2008 and 2012, with a majority of the vote — something no other repeat Democratic winner had done since Franklin D. Roosevelt.

So when the former president spoke Wednesday night at the Democratic National Convention, grayer and graver than when he left the White House, it was striking, and telling, to hear which voters he was trying to reach.

His voters — the voters he thinks can carry his former running mate, Joe Biden, to victory. 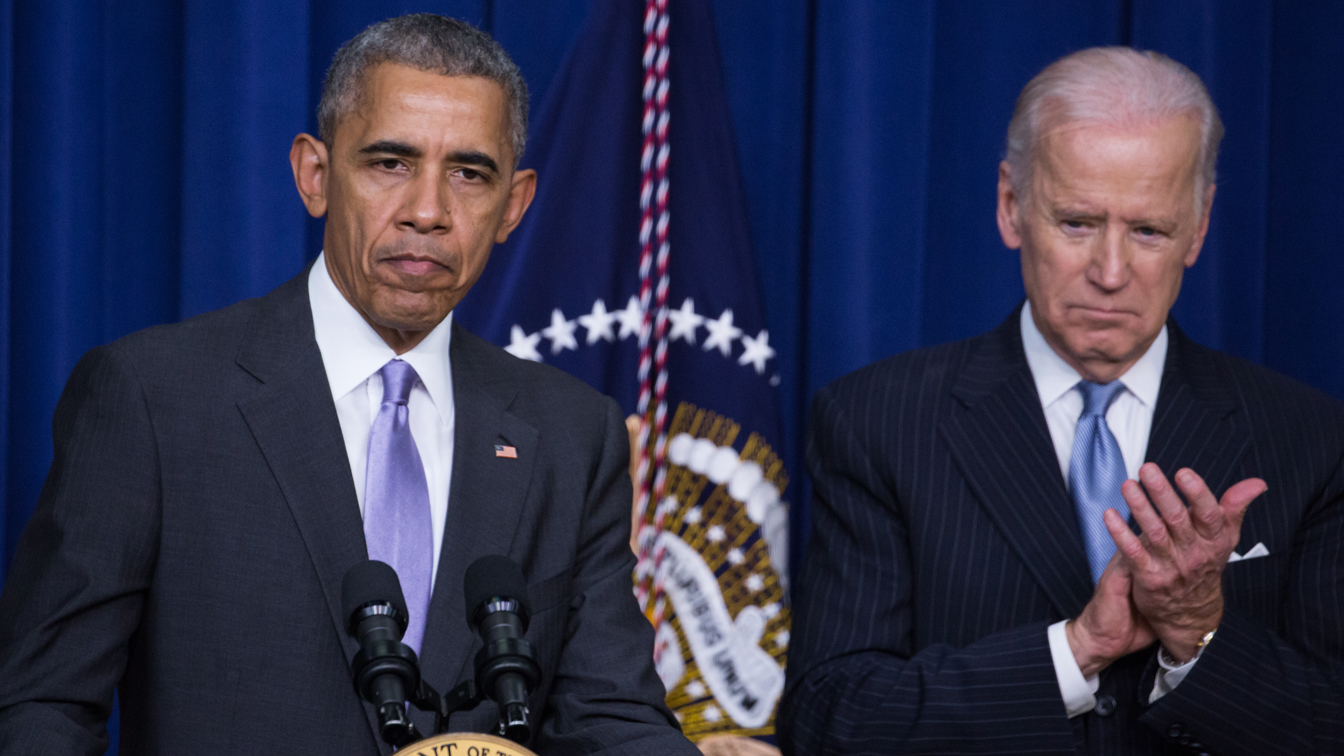 Obama didn’t do nearly as much, however, to reach out to the progressive voters who have pushed the party to the left since his time in office — and who have spent much of convention week complaining that they’re being stiffed in favor of prominent anti-Trump Republicans such as former Ohio Gov. John Kasich and former Secretary of State Colin Powell.

“Now, I know that in times as polarized as these, most of you have already made up your mind,” Obama said. “But maybe you’re still not sure which candidate you’ll vote for — or whether you’ll vote at all.

“I understand,” he added, “why the white factory worker who’s seen his wages cut or his job shipped overseas might feel like the government no longer looks out for him, and why a Black mother might feel like it never looked out for her at all.”

Then he told them to “make a plan right now for how you’re going to get involved and vote.”

A lot of fuss has been made this week about whether the DNC is ignoring progressives like Rep. Alexandria Ocasio-Cortez, D-N.Y., who spoke for a mere minute and a half Tuesday, seconding Sen. Bernie Sanders’s runner-up nomination status as a formality.

The answer is yes.

Yet the logic here arises less from fear that AOC and company will cause a commotion or alienate swing voters — the usual reasons why establishment Democrats tend to snub their left wing — and more from cold, hard electoral math. Like Obama, Team Biden clearly thinks the way to defeat the president in November is to win back Obama-Trump voters and lure nonvoters of color back to the polls. Boosting progressive support simply doesn’t matter as much to them.

Time will tell, but so far the evidence is on Biden’s side. 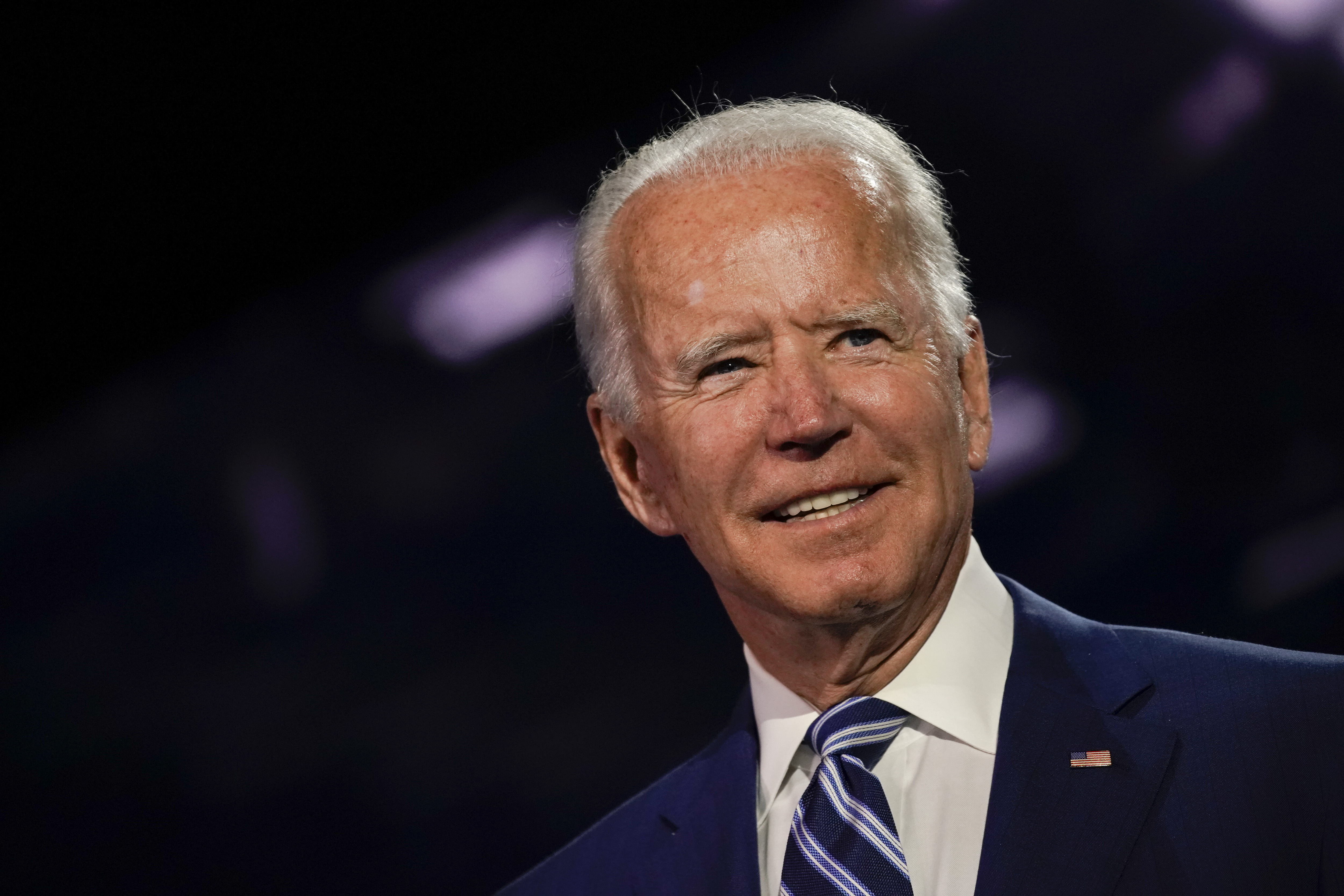 Progressives like Sanders have long argued that the way to win in 2020 is by mobilizing a new coalition of young voters and nonvoters who are excited by issues such as a Green New Deal, Medicare for All and free public college.

But the numbers don’t really support this theory. According to an analysis by Geoffrey Skelley of the University of Virginia’s Center for Politics, 11 percent of those who voted for Trump in 2016 voted for Barack Obama in 2012. “Since all these voters subtracted a vote from the Democratic column and added one to the Republican column,” the Atlantic’s Yascha Mounk has explained, “they made a real difference in the outcome” — more of a difference than any drive to recruit new voters could make.

Two years later, in 2018, Democrats won a landslide victory to control the House of Representatives. But the reason they gained so much ground is not because they expanded their base. In fact, according to Yair Ghitza of the Democratic data firm Catalist, about 89 percent of their “gains came from people who voted in both elections, switching from supporting Trump in 2016 to supporting Democrats in 2018.”

Finally, it’s true, as progressives like to point out, that turnout in traditionally Democratic areas — often home to large numbers of voters of color — was lower in 2016 than in 2012 and 2008. That undoubtedly contributed to Clinton’s loss. But there’s little data to suggest that the voters of color who stayed home in 2016 were hard-core progressives who didn’t show up for Clinton because she wasn’t liberal enough. In fact, quite the opposite: Black and Latino Democrats are actually more likely to be moderate — or even conservative — than white Democrats, and studies show that inconsistent voters in general are actually a lot less progressive than voters who consistently vote Democratic. 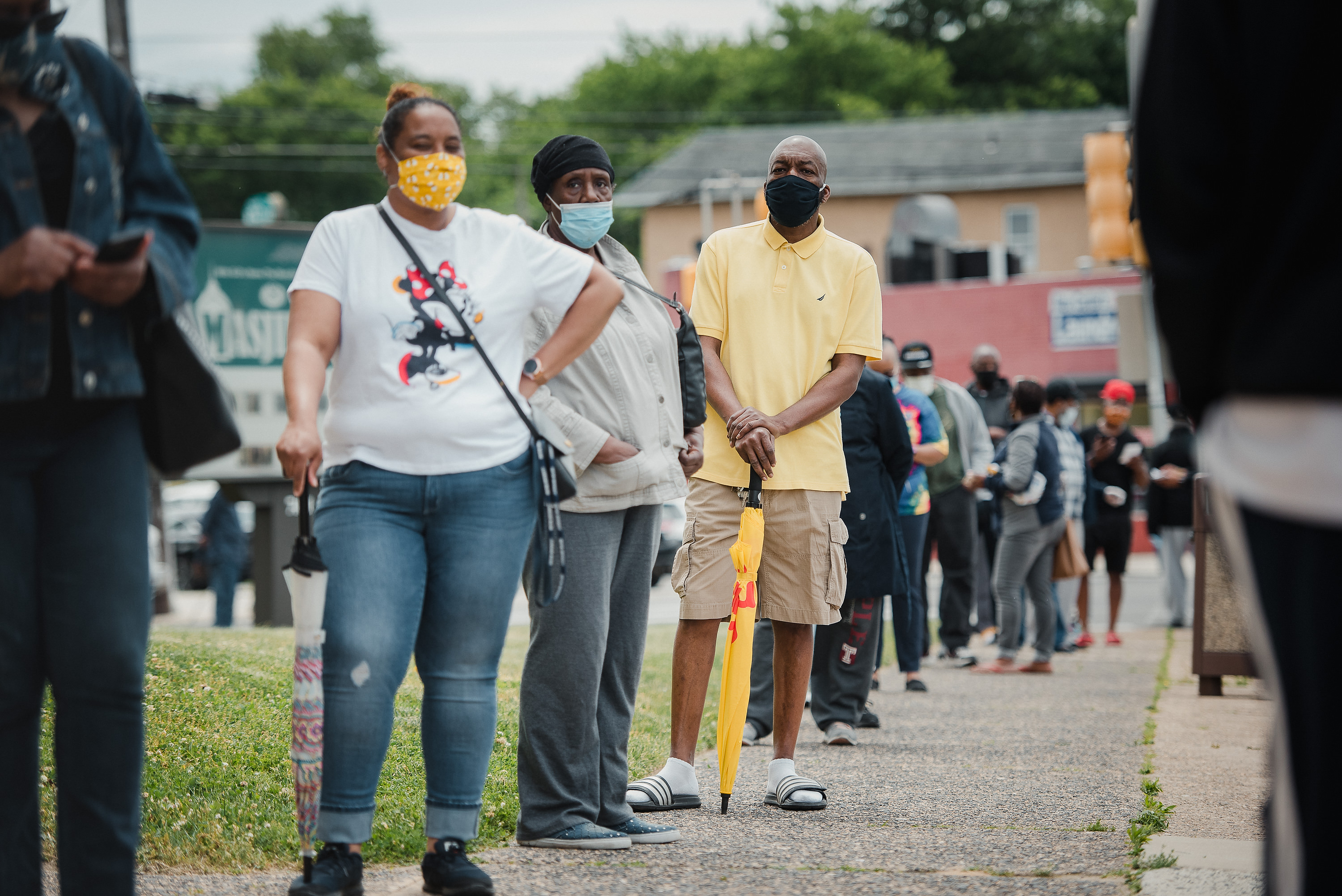 This math has shaped the very structure of the convention. What is typically a sprawling, all-day affair has been compressed, by virtue of its virtual, pandemic-era format, into a tight two-hour nightly production. Pleasing everyone — checking every box — is no longer an option.

Instead, hour one — the hour not carried on the broadcast networks — has been devoted largely to issues of identity and equality meant to engage and motivate nonvoters who sat out 2016. The faces on the screen — Black, Latino, Asian, indigenous — have meticulously reflected the demographic constituencies Democrats want to reach.

Then hour two — the more widely viewed hour — has transitioned, sometimes jarringly, to broader appeals meant to swing Obama-Trump voters back to Biden. Progressives, and the ideological appeals that might mollify their concerns about the nominee, have not been awarded an hour of their own.

Wednesday was a perfect example. Before the halfway point, the convention celebrated women (“the rabble-rouser, the pushy one”); championed immigrants (“immigration is our origin story”); and relegated two favorite Republican targets, Hillary Clinton and Nancy Pelosi, to less-than-prominent speaking slots.

But as soon as the clock struck 10, host Kerry Washington was touting Biden’s “plan to help working families and small businesses”; former Labor Secretary Hilda Solis was predicting that as president, Biden would create “5 million good union jobs”; and Iowa Rep. Cindy Axne was highlighting the economic plight of a fifth-generation farmer who said Trump “has no clue about this stuff.”

A few minutes later, progressive standard bearer Sen. Elizabeth Warren of Massachusetts appeared in a colorful kindergarten classroom. Yet instead of rabble-rousing, she patiently explained why the bread-and-butter issue of universal childcare was like “infrastructure for America’s families.” Behind her, barely visible in soft focus, alphabet blocks spelled out the letters “BLM,” for Black Lives Matter — a sign of what Democrats were putting front and center for the broadcast audience, and what they were not.

On Tuesday, hour one was dominated by the roll call vote, an inclusive production that involved numerous Native Americans, Latinos and a Black, gay bed-and-breakfast owner from Maine, America’s whitest state. Hour two started with “a topic that touches all of our lives” — health care — followed by hawkish Republicans such as Powell and former Defense Secretary Chuck Hagel testifying to Biden’s “strength” and “values.” There was even a video montage celebrating Biden’s friendship with the late Arizona senator and 2008 GOP presidential nominee John McCain.

The big speeches reflected the same dynamic. Politician after politician testified to Biden’s “decency” and “character” — virtues that should, they said, transcend ideological differences. 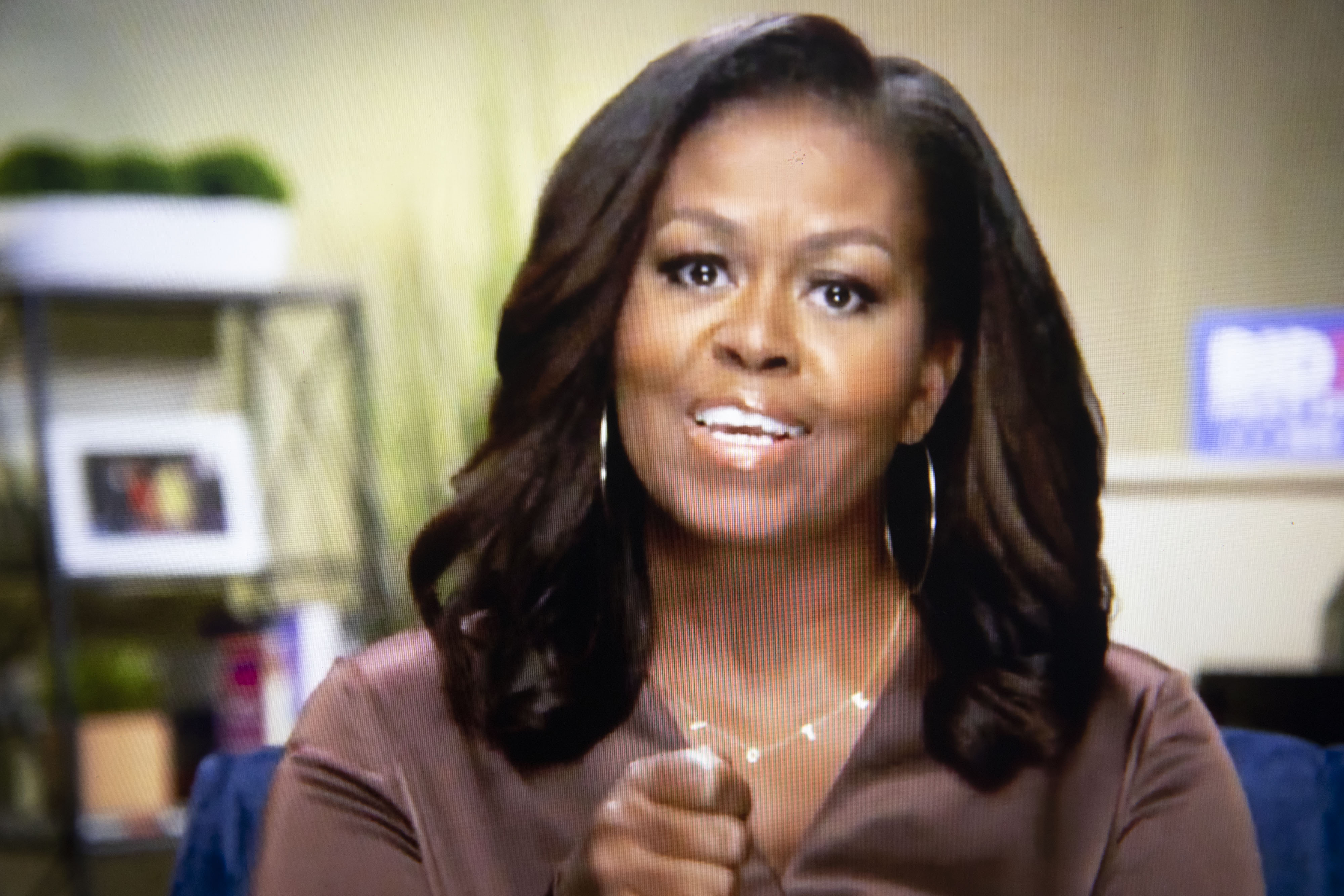 Former first lady Michelle Obama, meanwhile, made perhaps the most explicit appeal to her husband’s voters — specifically the ones who voted differently in 2016, or didn’t vote at all.

“Four years ago, too many people chose to believe that their votes didn’t matter,” Obama said. “Maybe they were fed up. Maybe they thought the outcome wouldn’t be close. Maybe the barriers felt too steep. Whatever the reason, in the end, those choices sent someone to the Oval Office who lost the national popular vote by nearly 3 million votes. In one of the states that determined the outcome, the winning margin averaged out to just two votes per precinct — two votes. And we’ve all been living with the consequences.”

No allusion to the “big structural changes” that progressives have demanded, no attempt to explain why Biden would deliver for them — just a brief, stern warning not to “withhold [their] votes in protest or play games with candidates who have no chance of winning.”

“For four years, people have said to me, ‘I didn’t realize how dangerous he was’; ‘I wish I could go back and do it over’; ‘I should have voted,’” Clinton recalled. “This can’t be another woulda-coulda-shoulda election.”

She didn’t mention the Green New Deal or Medicare for All.

Sanders was perhaps the only marquee name who departed from this script. “Let me take this opportunity to say a word to the millions who supported my campaign this year and in 2016,” he declared, rattling off a list of issues on which Biden and progressives see eye to eye, from raising the minimum wage to $15 an hour and transitioning to 100 percent clean electricity over the next 15 years. “If Donald Trump is reelected, all the progress we have made will be in jeopardy. … The price of failure is too great to imagine.” 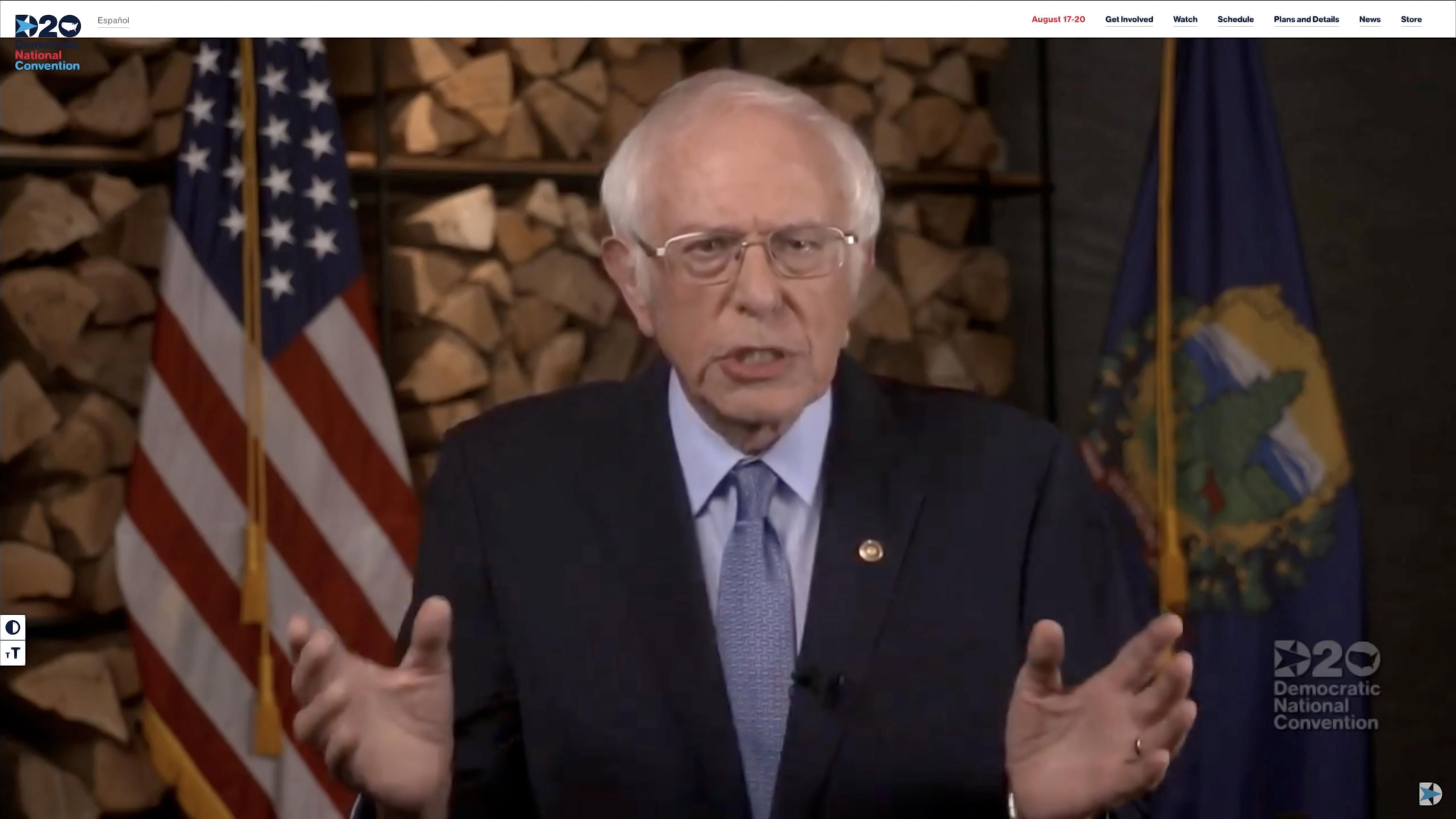 But even he was quick to summon “those who may have voted for Donald Trump in the last election” and vow that “as long as I am here, I will work with progressives, with moderates and, yes, with conservatives to preserve this nation from a threat that so many of our heroes fought and died to defeat.”

And that, ultimately, has been the convention’s message to progressives: Unless you’re willing to risk four more years of what Sanders described as Trump’s “authoritarianism,” a force that “destroys democracy, decency and humanity,” then you have nowhere else to turn.

Meanwhile, the real work of the 2020 election, at least as Biden and other party leaders see it — the work of recapturing the Obama voters who left Clinton in the lurch — is just getting underway.

More from Yahoo News:
You don’t need the U.S. Postal Service to deliver your mail-in ballot
Trump says children are ‘almost immune’ to COVID-19. Doctors don’t agree.
Memorable moments from past conventions
Should you send your child back to school? Here’s how to weigh the coronavirus risks
How the coronavirus could change college sports forever