Only 92 opposition legislators vote, well short of the 101 needed to remove Andrej Babis over a fraud scandal. 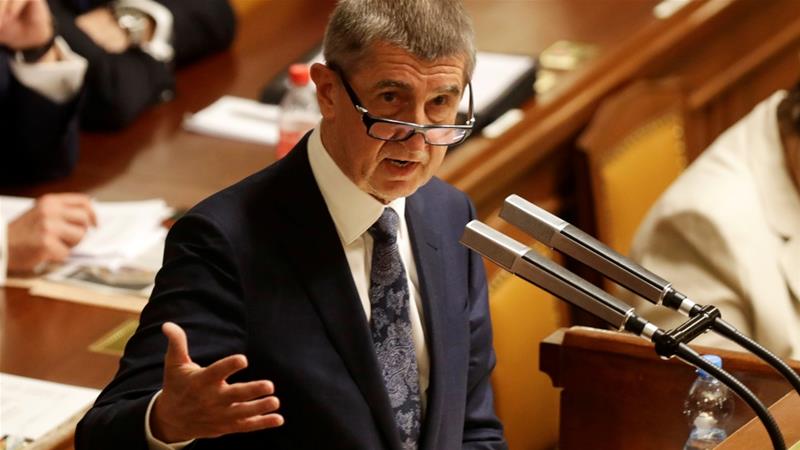 The vote on Friday saw only 92 opposition legislators backing the motion, well short of the 101 needed to topple Babis, an agrichemicals mogul pegged by Forbes magazine as the second-wealthiest Czech.

It followed allegations that the populist billionaire had kidnapped his own son to obstruct a high-profile fraud case, in which both of them were implicated.

The vote came just five months into the fragile government’s term and was supported by six opposition parties.

Babis faces charges of misusing $2.25m in EU subsidy for a luxury resort and farm, which he transferred to relatives, including his son, Andrej Babis Jr.

“The government should be headed by an ethical, moral, and decent person who is considered credible even by his political opponents. I do not see such a person heading it,” Ivan Bartos, chairman of the opposition Czech Pirate Party, said in Parliament during the vote.

While the opposition called for the prime minister to step aside to allow an independent investigation into the allegations, it failed to gain the support of at least one of the two coalition partners needed to win a simple majority.

The Communist Party voted in favour of Babis while MPs from the Social Democratic coalition abstained from the process, assuring a win for the ruling government.

“The government is successful and I want to say … it has our confidence. But it is obvious that the government is burdened by the circumstances surrounding the prime minister,” Interior Minister Jan Hamacek, leader of the Czech Social Democratic Party, said.

He assured a police investigation into the allegations against Babis will take place. Before the vote, he had told reporters that his party is open to an early election if required.

Last year, Babis was probed by local authorities and the EU over hiding ownership of the Stork Nest farm.

Babis has repeatedly said he had no intentions of stepping down from his post due to “unsubstantiated reports”. He also chastised the Seznam media outlet for secretly filming his 35-year-old son, who he claims suffers from schizophrenia.

“In this situation, I really have no reason to resign. You have to either dismiss me or you have to defeat me in a free, democratic election,” Babis said in a Facebook post on Friday.

On November 12, a Seznam reporter tracked down Babis Jr in Switzerland, where he lived with his mother. He said he was forced by a leader in his father’s government into hiding to prevent him from testifying in the case.

“What [Fridau’s vote] represents is an appeal for some standards in politics,” said Jiri Pehe, political analyst and director of the New York University in Prague.

“The [opposition] knew they wouldn’t succeed, but they had to go through this because this is a serious matter.”