Conjoined twins whose skulls were fused back-to-back and who had ‘one of the rarest and most complex forms of cranial and cerebral fusion’ doctors had seen have successfully been separated.

The two-year-old sisters Ervina and Prefina, were born in 2018 in Mbaiki, Central African Republic, with their heads attached and sharing critical blood vessels around their brains.

However surgeons at the Bambino Gesu (Baby Jesus) Paediatric Hospital in Rome, which is Vatican-owned but operates within the Italian public health system, have now successfully separated them following three risky surgeries.

The hospital said it was the first time in Italy and likely the world that surgeons were able to separate twins with the rare congenital defect in such a way. 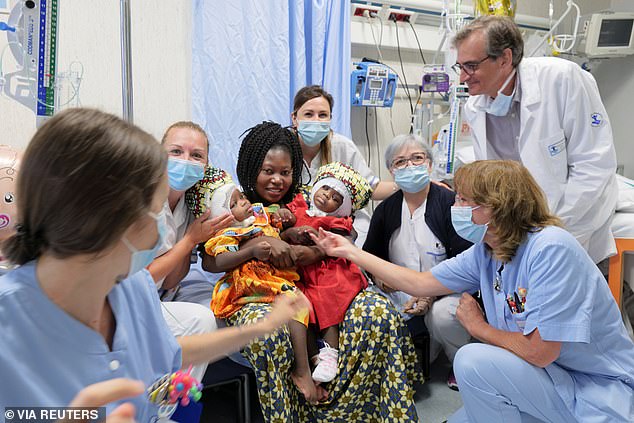 Sisters Ervina and Prefina (pictured with their mother Ermine Nzotto and a team of medical staff), who were born with a rare condition which saw their skulls fused together, have successfully been separated at the the Bambino Gesu (Baby Jesus) Pediatric Hospital in Rome, Italy 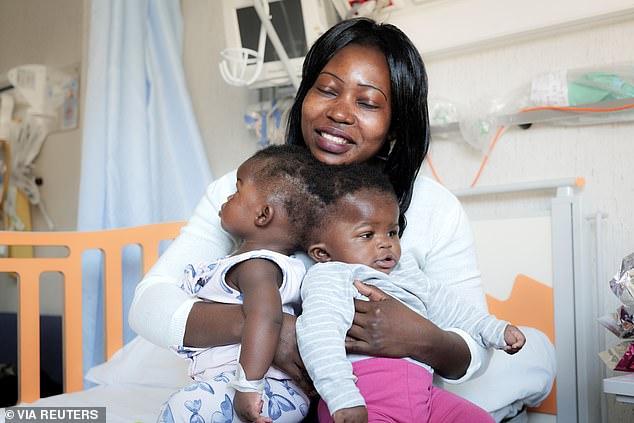 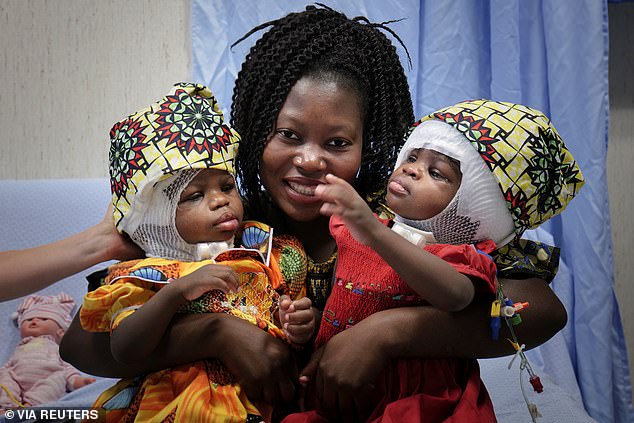 The two sisters were brought to Italy in September 2018 after the hospital’s president met the twins and their mother at a medical centre where they were born.

Tests conducted in Italy showed the twins to be generally in good health but that one sister’s heart was working harder to maintain the ‘physiological balance of the organs of both, including the brain.’

The greatest challenge facing the team of specialists – including neurosurgeons, anaesthesiologists, neuroradiologists, plastic surgeons, engineers, and physiotherapists – was the shared network of blood vessels bringing blood from the girls’ brains to their hearts, the hospital said in a statement.

The final surgery, which took 18 hours and involved 30 doctors and nurses, took place on June 5 when the bones of the shared skull were divided.

Surgeons then reconstructed the membrane covering the two brains and recreated the skin lining over the new skulls.

‘A month after the final separation, the twins are fine,’ said the hospital.

Dr Carlo Marras, chief of paediatric neurosurgery at Bambino Gesu, who led the team that worked for nearly two years planning and executing the separation, said the sisters would now be able to lead a ‘normal life’.

At a press conference to announce the outcome of the sisters’ surgery, Dr Marras said the prognosis was ‘these girls can have a normal life’ after a phase of rehabilitation.

Before the separation surgery, members of the Vatican hospital’s staff gave the girls mirrors so they could see one another.

They knew what each other sounded like, but the mirrors helped them associate facial expressions with their personalities and sounds, Dr Marras said.

‘It was an experience that wasn’t just professional but above all human: to think that you can arrive at something that we had only imagined, with all the possibilities of failure.

‘It was a magical moment. Marvellous,’ he said. 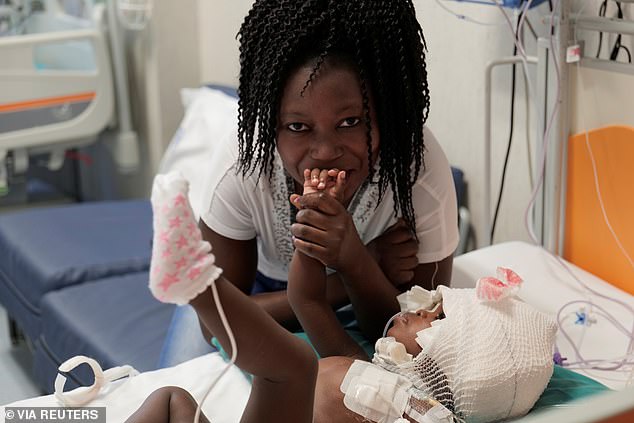 The hospital has said the girls still face hat the risk of infection and will need to wear protective helmets for a few months. Pictured: Mother Ermine Nzotto with one of her daughters 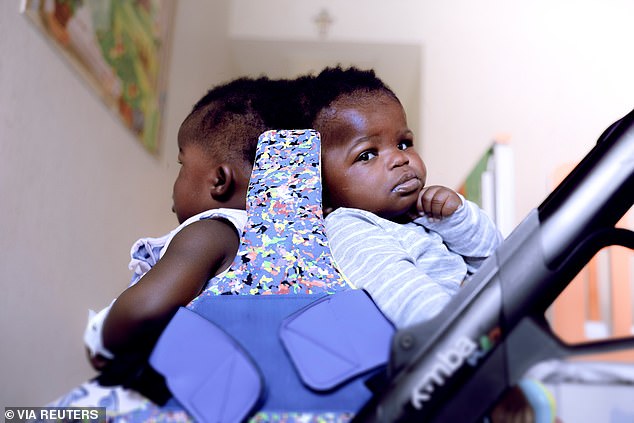 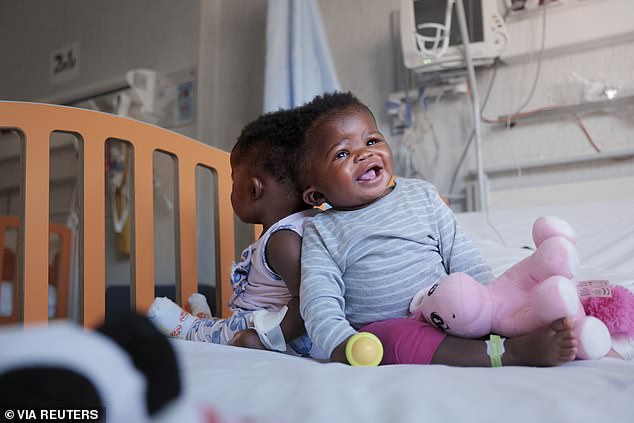 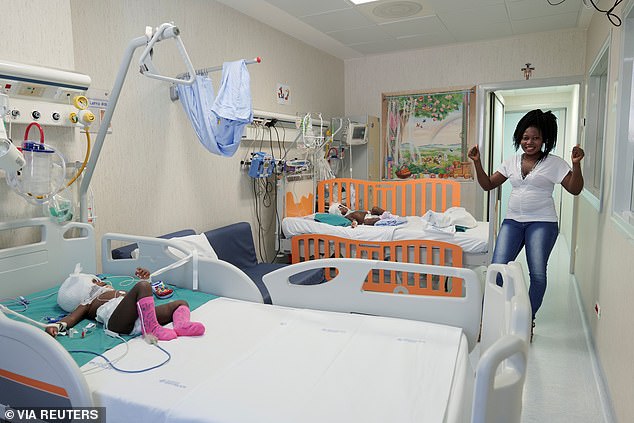 Pictured: Mother Ermine Nzotto smiles with joy as she walks into a hospital room to see her twin daughters Ervina and Prefina

Following the surgery, video images of a hospital party given for the twins’ second birthday with their mother on June 29 showed the girls, their heads wrapped in protective bandages, gesticulating and grabbing at their birthday cake.

The twins’ mother, Ermine Nzotto, wiped tears from her eyes as she watched a video prepared by the hospital of the twins’ before and after their separation.

Ms Nzotto said she never went to school but hopes her daughters would study to become doctors.

‘It’s a joy, that I can see my girls run and play like other children.

‘May they tomorrow study and learn to become doctors to save the other children of this world,’ she said through an interpreter.

The mother thanked Dr Marras, the hospital president and Pope Francis, who visited Central African Republic’s capital of Bangui in 2015 and has since strongly supported Bambino Gesu’s collaboration with the paediatric hospital there.

Ms Nzotto said she also hopes that Francis will now baptise her girls.

Hospital President Mariella Enoc had met the twins soon after they were born during a visit to the Central African Republic and was the driving force behind bringing them to Rome and seeing if they could be separated. 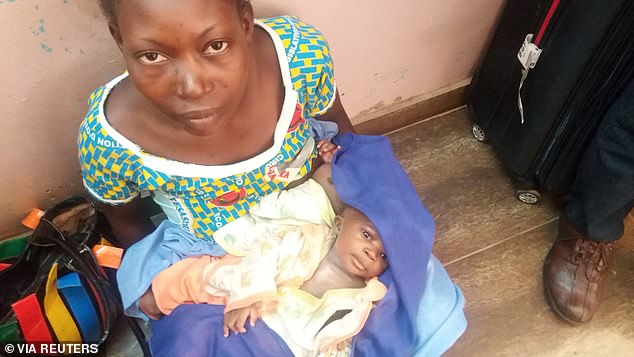 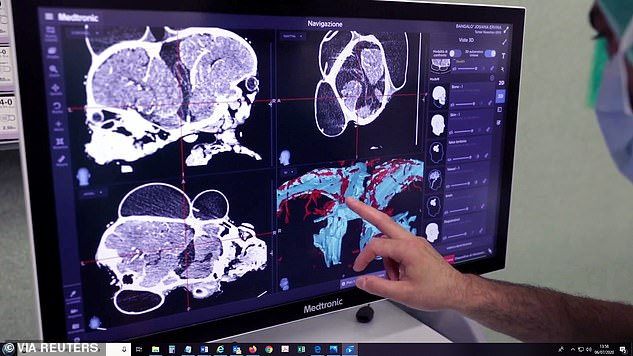 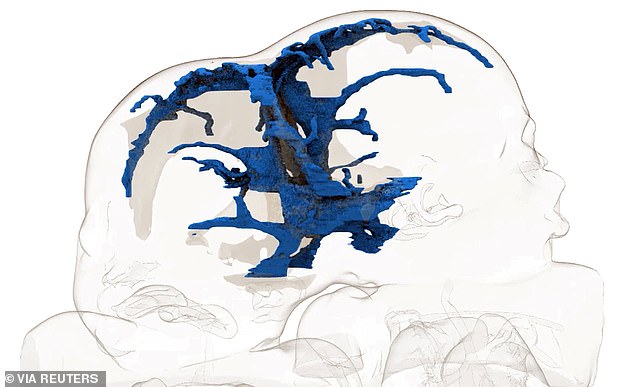 She said deciding to do so created ethical and economic questions, since the cost of one million euros (1.1 million US dollars) paid for primarily by the hospital foundation could have been spent on less-risky procedures that might have benefited more children.

But Ms Enoc said: ‘When you find a life that can be saved, you have to save it.’

The hospital has cautioned that the risk of infection was still present and the girls would have to wear protective helmets for a few months.

But post-operative controls showed that their brains were ‘intact,’ adding that they will have the opportunity to grow normally and ‘lead a normal life, like all girls of their age.’

It was the fourth time the hospital had operated on conjoined twins in its history.

Twins conjoined by the skull are extremely rare, or approximately one case every 2.5 million live births, the hospital said, adding that in Europe in the past 20 years only two cases of separating twins joined at the top of their skulls had been successful.