UNITED NATIONS — This is the world we live in: Punishing heat waves, catastrophic floods, huge fires and climate conditions so uncertain that children took to the streets en masse in global protests to demand action.

But this is also the world we live in: A pantheon of world leaders who have deep ties to the industries that are the biggest sources of planet-warming emissions, are hostile to protests or use climate science denial to score political points.

That stark contrast comes at a time when governments face a challenge they never have since the beginning of the industrial era, at least. In order to avert the worst effects of climate change, they must rebuild the engine of the global economy — to quickly get out of fossil fuels, the energy source that the system is based upon — because they failed to take steps earlier when scientists warned they should.

On Monday, at the United Nations Climate Action Summit, comes a glimpse of how far presidents and prime ministers are willing to go. The United Nations secretary general, António Guterres, expects around 60 countries to announce what he called new “concrete” plans to reduce emissions and help the world’s most vulnerable cope with the fallout from global warming.

The problem is, the protesters in the streets and some of the diplomats in the General Assembly hall are living in separate worlds.

“Our political climate is not friendly to this discussion at this moment,” said Alice Hill, who specializes in climate policy at the Council on Foreign Relations. “Multilateralism is under attack. We have seen the rise of authoritarian governments.”

“We see these pressures as working against us,” she said. “We don’t have leadership in the United States to help guide the process.”

[Want climate news in your inbox? Sign up here for Climate Fwd:, our email newsletter.]

President Donald Trump, in fact, has rolled back dozens of environmental regulations, most recently reversing rules on auto emissions, saying that they were an unnecessary burden on the American economy. In Brazil, Jair Bolsonaro wants to open the Amazon to new commercial activity. In Russia, Vladimir Putin presides over a vast, powerful petro-state. China’s state-owned companies are pushing for coal projects at home and abroad, even as the country tries in other ways to tamp down emissions. Narendra Modi of India is set on expanding coal too, even as he champions solar power.

The latest report by a United Nations-backed scientific panel, meanwhile, projected that if emissions continue to rise at their current pace, by 2040, the world could face inundated coastlines, intensifying droughts and food insecurity. Basically, a catastrophe. 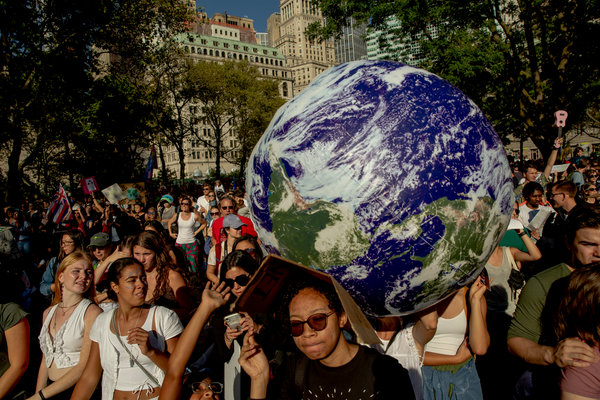 At a press briefing ahead of the Monday summit, Mr. Guterres was bullish on what he described as a new willingness by governments and companies to address climate change seriously. He said he hoped “a very meaningful number of countries” would declare their aim to reduce carbon emissions significantly and aim to be carbon-neutral by 2050.

“All of a sudden I started to feel there was momentum that was gaining, and this was largely due to the youth movement that started a fantastic, very dynamic impulse around the world,” Mr. Guterres said on Saturday as a United Nations Youth Climate Summit began.

Notably, though, there will be some important no-shows at the Monday meeting. The United States, the largest economy in the world, has not even asked to take the podium. Nor has Brazil, home to most of the Amazon rainforest, often referred to as the lungs of the planet. Nor Japan, an economic powerhouse and the world’s 7th largest emitter of greenhouse gases.

So, Mr. Guterres also tempered expectations. He said he did not expect announcements at the summit to yield emissions reductions that would measurably keep temperatures from rising to dangerous levels. At the current pace, global temperatures are set to rise beyond 3 degrees Celsius from preindustrial levels by the end of the century even if every country on Earth meets its goals under the 2015 Paris pact, which calls on nearly 200 nations to set voluntarily targets to reduce their emissions. Many big countries, including the United States, are not on track to meet their commitments.

At United Nations climate talks next year, countries face their next deadline to set more ambitious targets to reduce emissions. “The summit needs to be seen in a continuum,” Mr. Guterres said.

If anything, the Monday summit meeting, coming on the heels of huge youth protests worldwide, showed the vast distance between the urgency of climate action and the limits of diplomacy.

Organizers estimated the turnout at the Friday protests to be around four million in thousands of cities and towns worldwide. Rarely, if ever, has the modern world witnessed a youth movement so large and wide, spanning across societies rich and poor, tied together by a sense of rage. “Climate emergency now,” read banners in several countries. 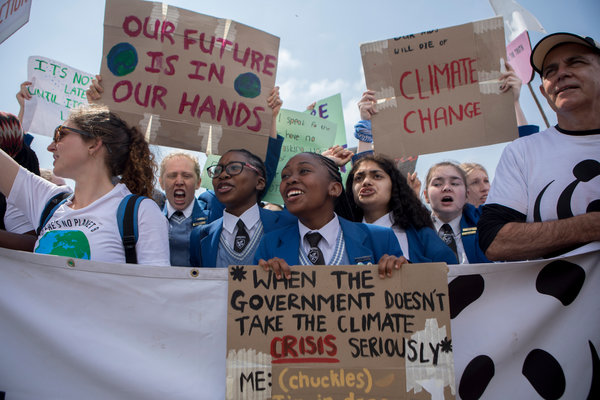 Whether the youth protests can goad many world leaders into changing their policies is a big question mark at best, said Michael B. Gerrard, a law professor at Columbia University. Some of them are closely linked to fossil fuel and extractive industries, he noted. Others have a record of crushing protests. And so the public pressure, Mr. Gerrard said, may well fall on “intentionally closed ears.”

No sooner will Mr. Guterres’s summit end then another United Nations-backed scientific panel report is to be released, this one on Wednesday on the dire state of the world’s oceans.

Mr. Guterres said he was offering time to speak Monday only to those countries that are taking “positive steps.” Russia is expected to say it will ratify the 2015 Paris Agreement. India is expected to promise more ambitious renewable energy targets. All eyes will be on China — currently the world’s largest emitter of greenhouse gases, but on track to meet its Paris agreement pledges — to see if it will announce that its emissions will begin falling sooner than it had originally predicted.

Several dozen countries are expected to promise to draw down their emissions to the point at which they are carbon-neutral by 2050; Britain is the largest economy to have set that target. Banks, fund managers and companies representing a variety of sectors are also expected to announce their own targets to align with the Paris agreement.

Still, the protesters and the diplomats have radically different expectations, and even a different sense of time.

On Saturday, at the youth summit, Greta Thunberg, the 16-year-old climate activist whose solo student strike has helped ignite a global youth movement, spoke directly to that gap.

Sitting next to Mr. Guterres, Ms. Thunberg took the microphone and said she didn’t want to take up much time. But she said the millions of young people who took to the streets protesting around the world the day before had made an impact. “We showed them we are united and that we young people are unstoppable,” she said.

Those protests have buoyed the efforts of United Nations officials to push for more ambitious climate action, but it hasn’t necessarily made the job easy.

“The time window is closing and it’s dramatically short for what we have to do,” said Achim Steiner, the head of the United Nations Development Program. “The protests are helpful because they show national leaders in their societies, in their countries, that the politics of climate change is changing and it is adding momentum and pressure to act.”

Whatever comes out of the Monday summit meeting may well seem lackluster to those out on the streets — the generation that will feel the intensifying impacts of climate change and who are demanding a swift end to the fossil fuel era. That’s the challenge facing Mr. Guterres, who has made climate action one of the top priorities for the world body at a time when several powerful world leaders have dismissed the science.

“It is a pretty exquisite balancing act to ally with Greta Thunberg and Xi Jinping to box in Donald Trump,” said Richard Gowan, who follows the United Nations for the International Crisis Group. “Let’s see if he can do it.”

Somini Sengupta covers international climate issues and is the author of “The End of Karma: Hope and Fury Among India’s Young.” @SominiSengupta • Facebook