The presence of PLA troops on the streets, even in such a role, could stoke further controversy over the Chinese-ruled territory’s autonomous status.

Hong Kong has been rocked by more than five months of demonstrations by protesters angry at perceived Communist Party meddling in the former British colony, which was guaranteed its freedoms when it returned to Chinese rule in 1997.

Beijing denies interfering and has blamed the unrest on foreign influences.

Clashes between protesters and police have become increasingly violent. China has said any attempt at independence for Hong Kong will be crushed, but troops have remained inside their base.

Chinese state media repeatedly broadcast comments made on Thursday by President Xi Jinping, in which he denounced the unrest and said “stopping violence and controlling chaos while restoring order is currently Hong Kong’s most urgent task”.

In a commentary on Saturday the ruling Communist Party’s People’s Daily newspaper called on public institutions to act “quickly and decisively” to supress and punish violence in Hong Kong.

Saturday’s clean-up followed some of the worst violence seen this year, after a police operation against protesters at the Chinese University of Hong Kong on Tuesday.

The authorities have since largely stayed away from at least five university campuses that had been barricaded by thousands of students and activists who stockpiled petrol bombs, catapults, bows and arrows and other weapons.

Many protesters appeared to have left the campuses by late Saturday but Hong Kong’s Cross-Harbour Tunnel was still blocked by protesters occupying Polytechnic University. Violence flared again on Saturday night.

Earlier, hundreds of pro-China demonstrators gathered by the city’s legislature and police headquarters, waving Chinese and Hong Kong flags. Some held up posters reading “Police we stand with you”, while others chanted “Support the police”.

Pro-China protests have so far attracted much smaller numbers than those angry at Beijing.

By late afternoon, the PLA soldiers had left the streets outside Baptist University beside their barracks in Kowloon Tong.

Chinese troops have appeared on streets only once since the 1997 handover to help clear up after a typhoon in 2018. It was not clear how many were involved on Saturday.

The PLA garrison in Hong Kong said that when some residents began cleaning, some troops “helped clear the road in front of the garrison gate”.

A city spokesman said the Hong Kong government did not request assistance from the PLA but the military initiated the operation as a “voluntary community activity”.

Demosistō, a pro-democracy organization, said Saturday’s clean-up operation could set a “grave precedent” if the city’s government invites the military to deal with internal problems.

In August, Beijing moved thousands of troops across the border into Hong Kong in what state news agency Xinhua described as a routine rotation. Foreign envoys and security analysts estimate up to 12,000 troops are now based across Hong Kong – more than double the usual garrison number. 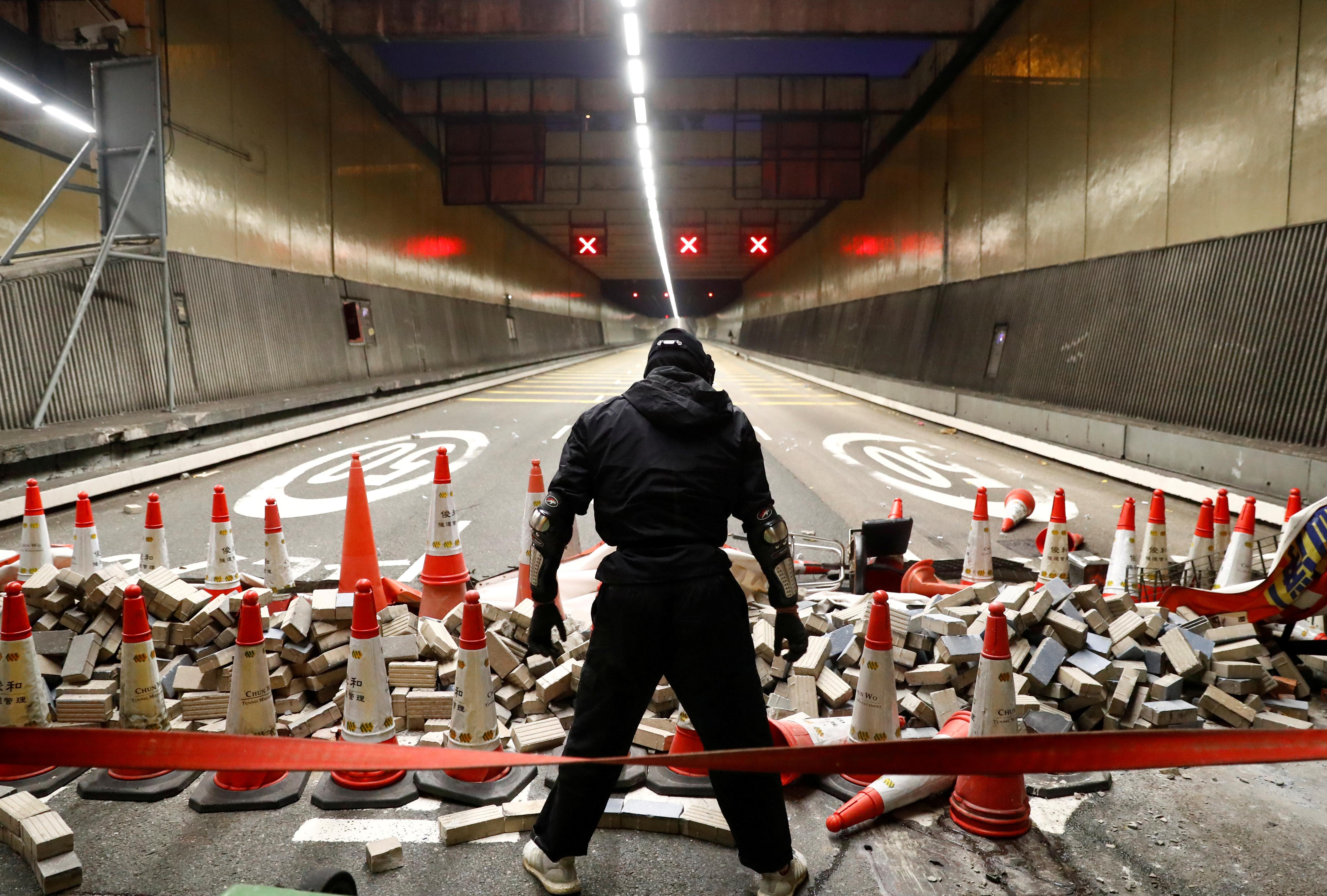 Standing beside a black flag with the slogan “Liberate Hong Kong, Revolution of our Times,” James Wong, 23, was among a handful of protesters still manning a bridge at Baptist University.

“We didn’t want to confront the people and the PLA troops directly,” he told Reuters. “We are not directly against the PLA, but rather the government. But the PLA should not leave their base because this is Hong Kong territory.”

Hundreds of residents moved in to help clear barricaded roads near several universities.

Clashes on Saturday saw at least one petrol bomb thrown before anti-government protesters at the campuses retreated. No soldiers appeared to have been involved in the confrontations.

“We just want our lives to continue,” said one resident who was helping clear streets near HKU. “There are many elderly who need to go the hospital and children who need to go to school. I am very sad to see what is happening in my community.”

Saturday’s rally to denounce the anti-government violence drew a mix of young and elderly.

“A lot of people keep silent, afraid of the rioters. It’s time for all the people who are silent to step up and say that’s enough,” said a 49-year-old housewife surnamed Kong.

A 70-year-old street cleaner died on Thursday after being hit on the head a brick police said had been thrown by rioters. On Monday, police blamed a rioter for dousing a man in petrol and setting him on fire. The victim is in critical condition.

On the same day, police shot a protester in the abdomen. He was in a stable condition.

Pro-police protesters laid white flowers outside the government office to pay their respects to the cleaner. Others applauded and cheered the police, some bowing and giving thumbs up as they walked past riot police on duty. 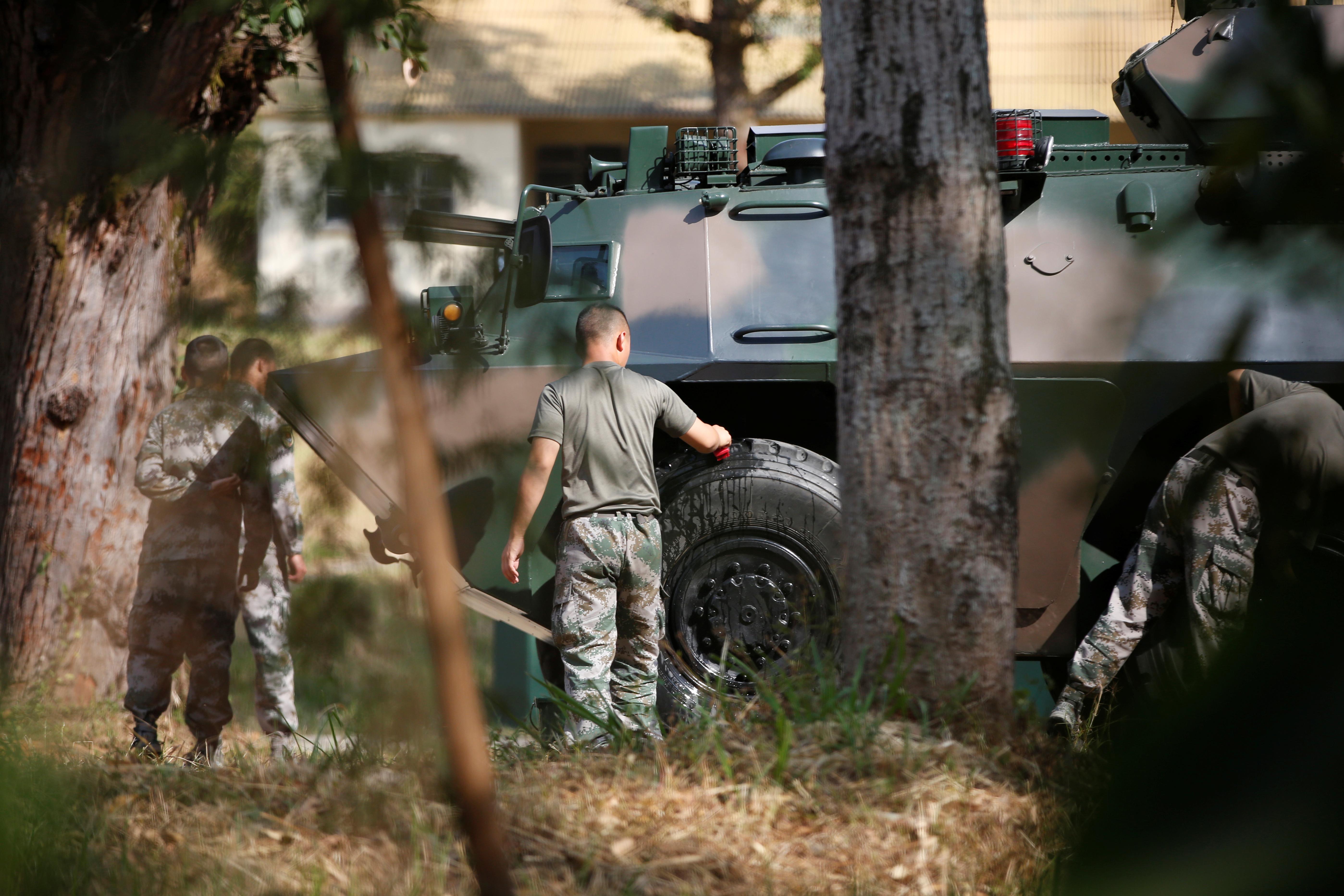