Nairobi: Four days after her toddler's health took a turn for the worse, his tiny body wracked by fever, diarrhoea and vomiting, Sharon Mbone decided it was time to try yet another medicine. 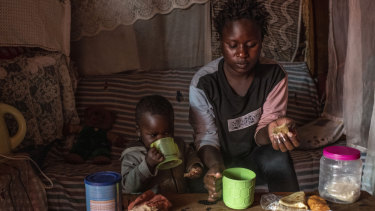 Sharon Mbone has breakfast with her son, who has been ill and taking antibiotics, at home in Kibera, Nairobi.
Credit:Andrew Renneisen, The New York Times.

With no money to see a doctor, she carried him to the local pharmacy stall, a corrugated shack near her home in Kibera, a sprawling impoverished community here in Nairobi. The shop's owner, John Otieno, listened as she described her 22-month-old son's symptoms and rattled off the pharmacological buffet of medicines he had dispensed to her over the previous two weeks. None of them, including four types of antibiotics, were working, she said in despair.

Like most of the small shopkeepers who provide on-the-spot diagnosis and treatment here and across Africa and Asia, Otieno does not have a pharmacist's degree or any medical training at all. Still, he confidently reached for two antibiotics that he had yet to sell to Mbone.

Antibiotics, the miracle drugs credited with saving tens of millions of lives, have never been more accessible to the world's poor, thanks in large part to the mass production of generics in China and India. Across much of the developing world, it costs just a few dollars to buy drugs such as amoxicillin, a first-line antibiotic that can be used against a broad range of infections, from bacterial pneumonia and chlamydia to salmonella, strep throat and Lyme disease. 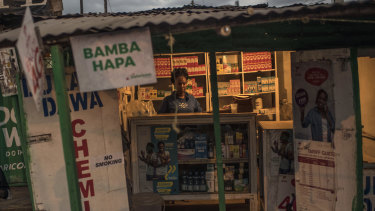 A pharmacy in Kibera, a sprawling impoverished community in Nairobi.Credit:New York Times

Kibera residents are prodigious consumers of antibiotics. One study found that 90 per cent of households in Kibera had used antibiotics in the previous year, compared with about 17 per cent for the typical American family.

But the increasing availability of antibiotics has accelerated an alarming downside: The drugs are losing their ability to kill the germs they were created to conquer. Hard-wired to survive, many bacteria have evolved to outsmart the medications.

And as these mutant bacteria commingle with other pathogens in sewage canals, hospital wards and livestock pens, they can share their genetic resistance traits, making other microorganisms impervious to antibiotics.

Antibiotic resistance is a global threat, but it is often viewed as a problem in rich countries, where comfortably insured patients rush to the doctor to demand prescriptions at the slightest hint of a cough or cold. 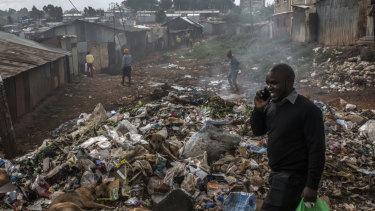 One of the may rubbish dumps in Kibera.Credit:NY Times

In fact, urban poverty is a huge and largely unappreciated driver of resistance. And so, the rise of resistant microbes is having a disproportionate effect on poor countries, where squalid and crowded living conditions, lax oversight of antibiotic use and a scarcity of affordable medical care are fueling the spread of infections increasingly unresponsive to drugs.

Sam Kariuki, a researcher at the Kenya Medical Research Institute who has been studying resistance for two decades, said nearly 70 per cent of salmonella infections in Kenya had stopped responding to the most widely available antibiotics, up from 45 per cent in the early 2000s.

Salmonella kills roughly 45,000 Kenyan children every year, or nearly 1 in 3 who fall severely ill with it, he said. In the United States, the mortality rate is close to zero.

"We are quickly running out of treatment options," Kariuki said. "If we don't get a handle on the problem, I fear for the future."

There is no escaping human waste in Kibera. It oozes from shallow, hand-dug latrines, pools into rivulets and finally builds into a black river.

At night, feces-filled plastic bags are tossed from rooftops by those afraid to venture outdoors. Residents call them flying toilets.

Mbone, 19, and her husband have become inured to the sight and smell of untreated sewage that flows in front of their one-room shack. With no other place to play, their son, Shane, and his 3-year-old sister sometimes end up frolicking in the muck. "They are kids, they will always go outside to play," Mbone said. "How can you stop them?"

A plastic bucket brimming with store-bought medicine is a testament to the ailments that have dogged Shane for most of his short life. Born prematurely, he spent his first few weeks in a clinic and then at a hospital. Even with subsidized care, the medical bills came to roughly $US200, equivalent to 10 months of wages that Mbone's husband earns as a bus station porter. Since then, she has been reluctant to take Shane to a doctor. "I'm worried if I go to a bigger hospital, the bill will be bigger too," she said.

Mbone is not convinced that the unsanitary conditions are to blame for Shane's health problems. Other children play in Kibera's drainage ditches, she noted, while few are bedeviled by the constant diarrhoea that afflicts her son.

But epidemiologists and public health experts who have studied Kibera say there is a direct correlation between the community's poor hygiene and the infections that stalk nearly every household. Harmful bacteria in faeces that is allowed to seep into the surrounding soil can survive for months, and in densely populated settlements like Kibera that are veined with dirt paths, they easily find their way into food and water, often by residents who unknowingly carry the pathogens into their homes on shoes or unwashed hands.

According to a 2012 study by the US Centers for Disease Control and Prevention, cases of typhoid fever among children in Kibera were 15 times higher than those living in a rural area west of the capital; infections in Kibera were even higher in low-lying areas where sewage tends to pool. The study also found that 75 per cent of the typhoid strains found there were resistant to commonly available antibiotics.

"A lack of sanitation leads to more disease, which leads to higher antibiotic use, which leads to greater resistance," said Marc-Alain Widdowson, principal deputy director of the CDC's Division of Global Health Protection for Kenya, which has been doing surveillance work in Kibera since 1979. "It's a vicious cycle."

If Ntihinyuirwa Thade had been conscious, the doctors at Kijabe Mission Hospital would have asked about his medical history, including a list of antibiotics he had taken in recent years. But Thade, 25, a migrant labourer from Rwanda, was on a ventilator and unconscious, having fallen from the upper floor of a building project. He was not wearing a hard hat and suffered a grievous head injury.

A week after the accident, he was facing a more immediate threat: A Klebsiella pneumonia infection was blossoming in his lungs. Thade's condition failed to respond to the three antibiotics already flushed into his veins, so his doctor, George Otieno (no relation to John Otieno, the pharmacy stall owner), was preparing to administer the final drug in his limited arsenal, a relatively expensive antibiotic called meropenem. "If that doesn't work … ," he said, his voice trailing off.

Klebsiella bacteria are omnipresent in the environment — in the soil and in the human gut — but they can turn deadly for people with frayed immunities.

Otieno acknowledged Thade most likely acquired his through the plastic breathing tube that was keeping him alive.

Many of the world's leading medical institutions struggle with resistant microbes and Kijabe, one of Kenya's best hospitals, is no different.

Nestled in a verdant valley just outside Nairobi, it boasts top-notch equipment and a mix of Kenyan and foreign doctors that draw patients from across the country. But being a referral hospital has a downside: Many people arrive quite sick and have already cycled through a plethora of antibiotics. "Oftentimes they have taken every drug that is commonly available," said Dr. Evelyn Mbugua, an internist.

In the days that followed, Thade's condition stabilized enough that he was moved out of the intensive care unit. Though his injuries prevented him from walking, he regained consciousness and seemed to be recovering, his doctors said, but the infection was tenacious and gave no ground to meropenem, the best antibiotic in the hospital's arsenal. Three months later, after the infection spread to his blood, Thade died alone in his bed and far from home. "God rest his soul," Otieno said.