Captain Sir Tom Moore has lent his support to Lloyd Scott as he plans to climb the Three Peaks wearing a 130lb deep-sea diving suit.

Mr Scott, 58, will be climbing Britain’s three tallest mountains over an eight-day period next month.

It comes 18 years after he earned the world record for slowest time to complete a marathon while wearing the same suit – with a time of five days, eight hours, 29 minutes and 46 seconds.

The ascent of Ben Nevis, Scafell Pike and Mount Snowdon will be Mr Scott’s final charity challenge, after raising over £5 million across 30 years for charitable causes. 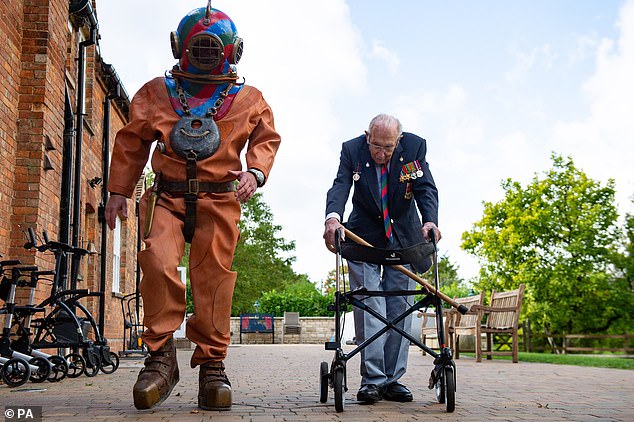 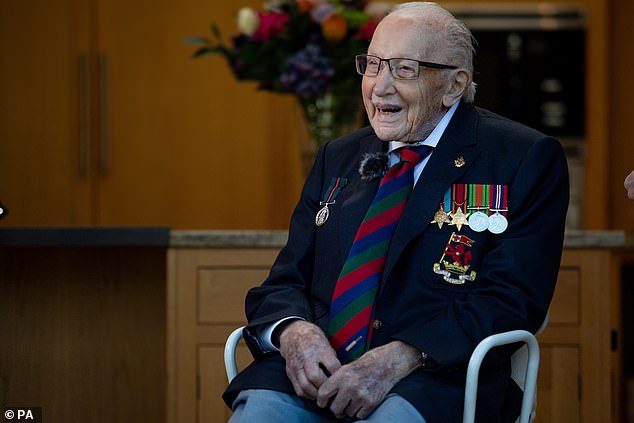 Captain Tom met Mr Scott at his home in Marston Moretaine, Bedford, and even won a short race against the veteran fundraiser in his diving suit.

‘It was kind of coming up with something to say that hasn’t been said. For me the biggest accolade that I could think of was that he brought the very best out of humanity.

‘To have someone like him supporting and endorsing my challenge, it was very special.

‘We had a race. He’s such a gentleman, he didn’t want to go in front of me. 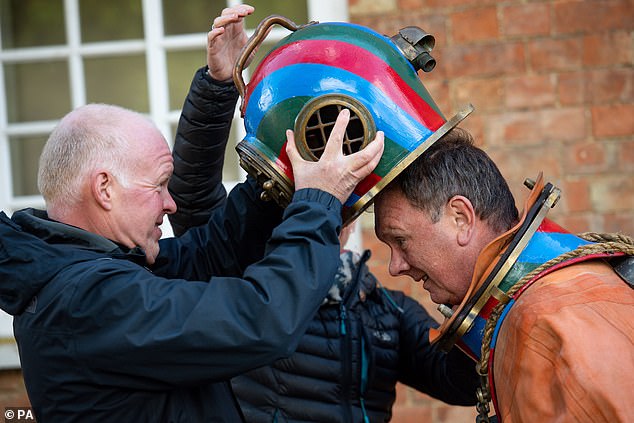 Mr Scott (pictured as the suit’s helmet was placed over his head) raced a marathon in the suit in 2002. He earned the world record for slowest marathon after five days, eight hours, 29 minutes and 46 seconds 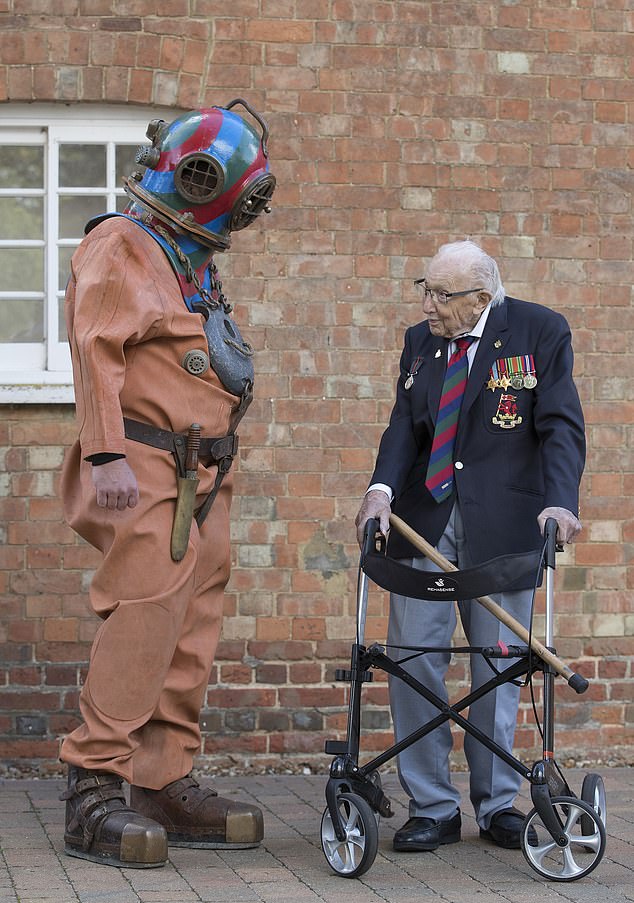 ‘Everyone’s had a very difficult time this year. With my specific brand of fundraising, if I could put a smile on the face of the nation it might lift peoples spirits.’

Mr Scott’s first charity challenge was the 1987 London Marathon, which he completed after being diagnosed with leukaemia.

He has since completed an Everest marathon, an underwater marathon, and cycled a Penny Farthing across Australia.

‘I needed the finality of saying an event was my last and I was going out on top,’ Mr Scott said. 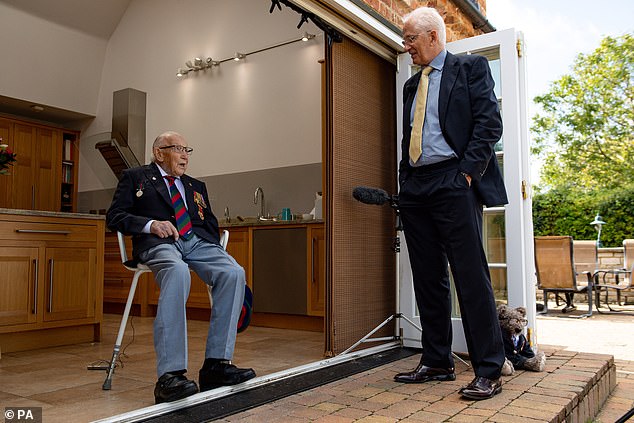 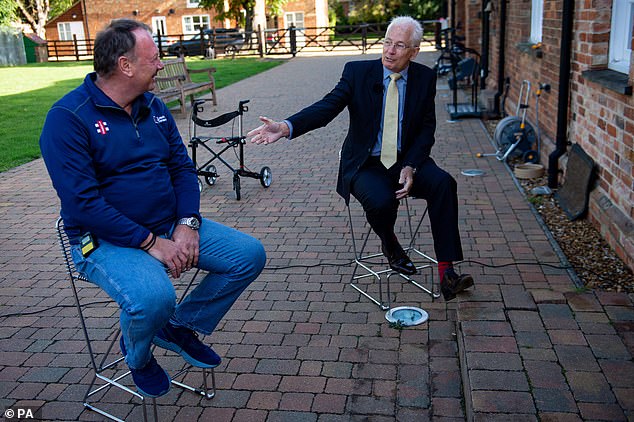 ‘The last I had done was the Malden mud race in 2014. It took seven guys tying a rope around me to get me over the line, so I wasn’t going out on that.’

Mr Scott will start the 23-mile challenge, involving an ascent of 3,064 metres, on October 4.

‘Knowing that my family can be there at the end, and that both my boys and brother can come along means so much,’ he said.

‘Sadly, my dad passed away in February, but I’ll have his red fleece that he wore on all his adventures with me.’

Mr Scott will be raising money for The Lord’s Taverners, a youth cricket and disability sports charity, which he has been a member of for 15 years. 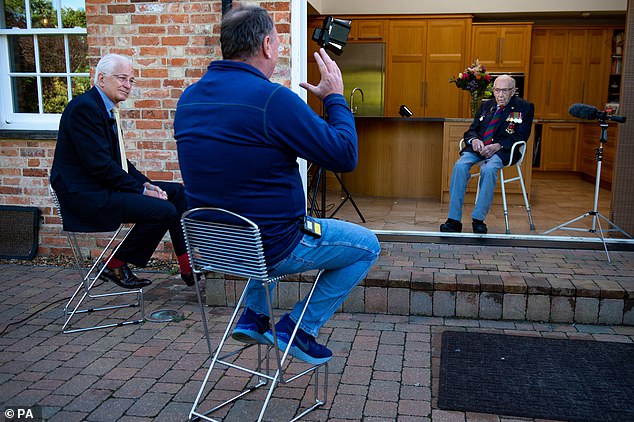 The pair enjoyed a distanced conversation with Captain Tom. Mr Scott said his next challenge would be his last

‘When I had leukaemia, there was a period where I couldn’t play any sport. It’s only when you have something, and it’s taken away from you and that you realise how important it is,’ he said.

‘The thought of children out there that may not experience the thrill, excitement, enjoyment of sport really resonates with me. I couldn’t think of anyone I wanted to do this for more.’

Due to Covid-19 restrictions, Sir Tom will not be joining Mr Scott at any stage of the challenge.

To see donations to The Lord’s Taverners, visit: donate.giveasyoulive.com/fundraising/lloydscotts3peakschallenge