Biden’s campaign dilemma: courting voters in the age of COVID-19

Washington: As US President Donald Trump flouts social distancing regulations by appearing at packed indoor rallies, his Democratic rival Joe Biden is facing a challenge: generating enthusiasm in battleground states while showing that he takes the coronavirus pandemic seriously.

With less than two months remaining until election day, Biden has stepped up his travel in recent weeks. But Trump, whose travel schedule is far more intense, still regularly ridicules the 77-year-old for being confined to his Delaware "basement", offering it as evidence he does not have the stamina to serve as commander-in-chief. 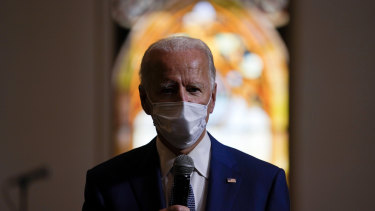 Even if a candidate only interacts with a few people during their campaign events, being physically present in swing states is crucial because of the usually positive attention it generates in local media outlets.

Biden's schedule on Wednesday (AEST) showed how he was trying to strike the right balance between modelling good public health behaviour and political campaigning.

The Democratic nominee made his first trip of the campaign to Florida, a perennial swing state where polls have shown him losing ground in recent weeks.

In particular, polls have pointed to a disturbing drop in support for Biden among Hispanic voters, who make up around a fifth of the Florida electorate. The Sunshine State has a large, established Cuban community that has been joined by new waves of immigrants from places such as Puerto Rico and Venezuela.

An NBC News poll last week showed Trump leading Biden among Latino voters in Florida by 50 to 46 per cent, a result that would be a big turnaround from the 2016 result. Other polls have been more positive for Biden but there is broad consensus among Democratic strategists that Biden has more work to do to win over Hispanic voters.

The issue of immigration and Trump's proposed wall on the border with Mexico is playing a less prominent role in this year's campaign, and the Trump campaign has invested heavily in Spanish-language advertising.

At a community college in Tampa, Biden held a roundtable with military veterans. The event used strict physical distancing guidelines, with the handful of mask-wearing participants spread out around a horseshoe-shape set of tables.

"Trump has no idea about the ideas that animate women and men who sign up to serve: duty, honour, country," Biden said. "That’s what service and patriotism is all about."

His aim was to capitalise from the fallout from a recent story in The Atlantic magazine that quoted Trump disparaging deceased soldiers as "losers" and "suckers". Florida has a big share of military voters, and this demographic is seen as a potential weak spot for Trump.

Afterwards Biden travelled to Kissimmee, a city in central Florida that is home to a booming Puerto Rican community, for an event marking Hispanic Heritage Month.

There was only a handful of people in the room for the event – a dramatic contrast to Trump’s decision to hold a packed indoor rally in Nevada, another state with a large Hispanic population, at the weekend against the state's health advice. It also started an hour late.

Biden was introduced by Hispanic musicians Ricky Martin and Louis Fonsi, as well as actress Eva Longoria, who all pleaded with voters to support Biden on November 3.

Referring to his hit song with Justin Bieber, Fonsi said: "Despacito proved to me that in this country we will never be defined by our differences and no matter who is president, Latinos and Latinas will always have a place here. But how much better would it be to have a president who celebrates our community?"

Biden, appearing to a smattering of applause, then played Despacito on his mobile phone speaker before beginning his speech.

"More than any other time, the Hispanic community, Latino community holds in the palm of their hand the destiny of this country,” Biden said in a brief speech. "You can decide the direction of this country."

And then he boarded a plane back to Delaware.

Our weekly newsletter will deliver expert analysis of the race to the White House from our US correspondent Matthew Knott. Sign up for the Herald‘s newsletter here, The Age‘s here, Brisbane Times‘ here and WAtoday‘s here.