Baby becomes first to receive world’s most expensive drug on the NHS: Five-month-old with spinal muscular atrophy is given £1.8MILLION one-off therapy that can prevent paralysis

A baby has become the first patient to be treated with the world’s most expensive drug on the NHS.

Five-month-old Arthur Morgan was given the £1.8million one-off therapy last week after being diagnosed with a deadly disorder which sees the muscles rapidly waste away.

His parents, Reece and Rosie, were told earlier this month that their son had spinal muscular atrophy (SMA), a condition which affects just 60 youngsters each year.

More than half of babies suffering from SMA do not make it past their second birthday and until two years ago there were no proven treatments.

The family, from south London, had taken Arthur to A&E after growing concerned that he could not sit upright and struggled to hold his head up properly.

Just three weeks after his diagnosis he was given the pioneering gene therapy known as Zolgensma at Evelina London Children’s Hospital.

The US-made drug is thought to be the most expensive medicine in the world, at a whopping £1.79million per dose, and studies have shown it can prevent paralysis.

It is administered via an IV drip and instructs the body to make a protein which people with SMA are deficient in.

The NHS struck a deal with the company Novartis Gene Therapies for the treatment in March. NHS England has not revealed how much it is paying for the drug but claim it is ‘a price that is fair to taxpayers’. 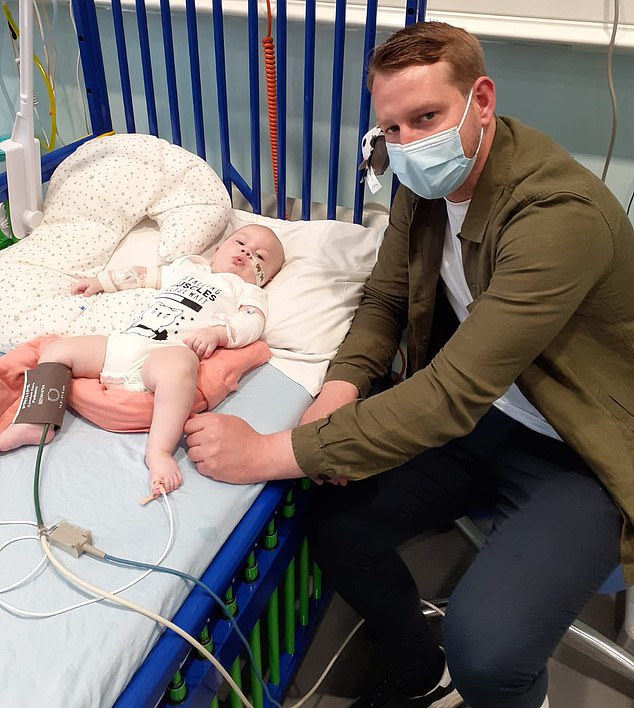 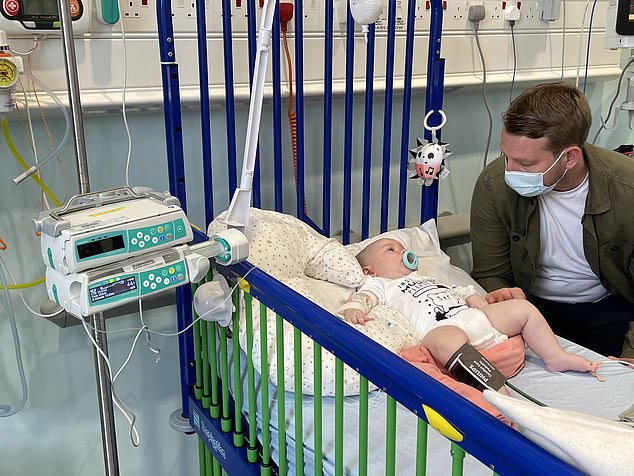 He was diagnosed with spinal muscular atrophy and after three weeks received £1.8million treatment Zolgensma at Evelina London Children’s Hospital 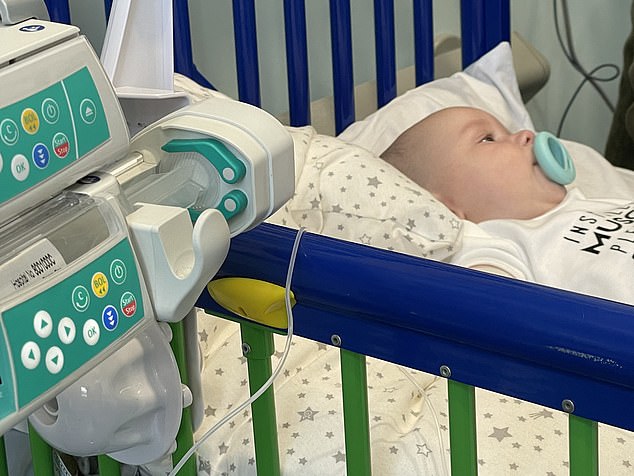 The treatment replaces a faulty gene, which enables his muscles to function normally 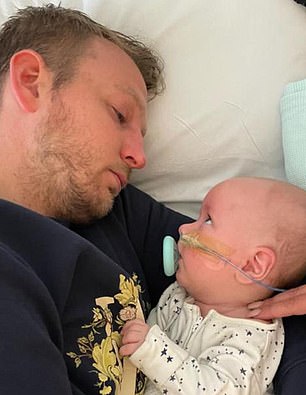 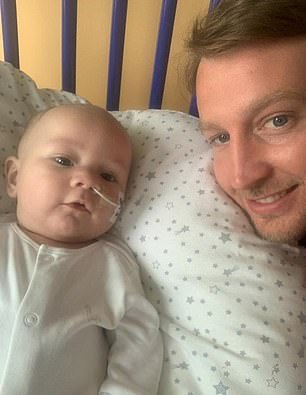 Father Reece said he was ‘so grateful’ to the NHS for their help. Relatives have set up a fundraising page to assist the family. It has so far raised £25,000 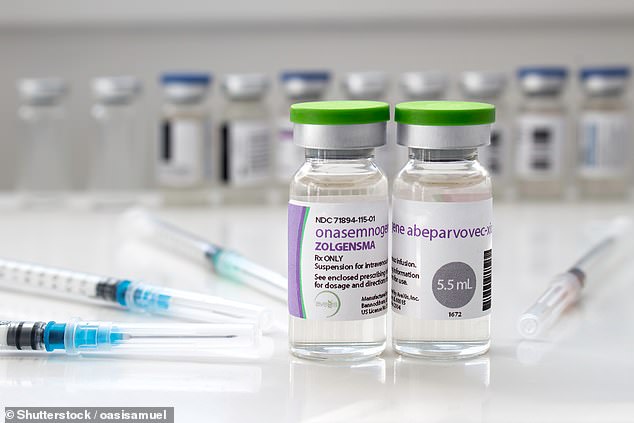 In studies, a single treatment with Zolgensma has helped babies with SMA to sit, crawl and walk and also prevented them from having to be put on a ventilator.

The long-term benefits of the drug are still unclear due to how recently it was approved.

Four specialist NHS centres have now been commissioned across the country to administer the treatment.

WHAT IS SPINAL MUSCULAR ATROPHY?

Spinal Muscular Atrophy (SMA) is a disease that weakens a patient’s strength by affecting the motor nerve cells in the spinal cord.

Those affected never gain the ability to walk, eat or breathe.

SMA is the number one genetic cause of death for infants.

It is genetic and passed from parent to child.

There are four primary types of SMA—I, II, III and IV, which are based on age of onset and the physical milestones achieved.

An agreement is in place for Evelina London Children’s Hospital to take on children from Great Ormond Street, the country’s best-known children’s hospital.

Arthur’s father Reece, 31, who is a self-employed plasterer, said he was ‘so grateful’ to the NHS for making the treatment available to his son.

He said: ‘When we found out that Arthur would get the treatment, and be the first patient, I just broke down.

‘It had been such a whirlwind few weeks, filled with lots of anxiety and adjustment as we learnt about his condition and what it might mean for him and our family.

‘The way the treatment works is incredible, where the gene is hidden in a virus, and is given to him in a simple cannula.

He added: ‘This is the best possible treatment and will give him the best life he can have, and we are so grateful that the NHS is here for him.’

Baby Arthur, who was born six weeks premature in December, was diagnosed with Type 1 SMA, which is the most common form of the condition.

The treatment Zolgensma works by replacing a faulty gene that stops the body making a protein called SMN, which is critical for in muscle function.

The corrected gene is put into a harmless virus which is then injected into the baby’s hand, working similarly to a vaccine.

The gene starts making the SMN protein which prevents the loss of motor neurons — nerve cells that help co-ordinate movement in the spinal cord. These neurons send signals to the muscles.

In a study of 15 babies treated with Zolgensma published in the New England Journal of Medicine in 2017, all 15 were alive at 20 months of age, compared with 8 per cent among an untreated group from the past.

Twelve of the children received a higher dose, and at 20 months 11 could sit unaided and two walked independently. 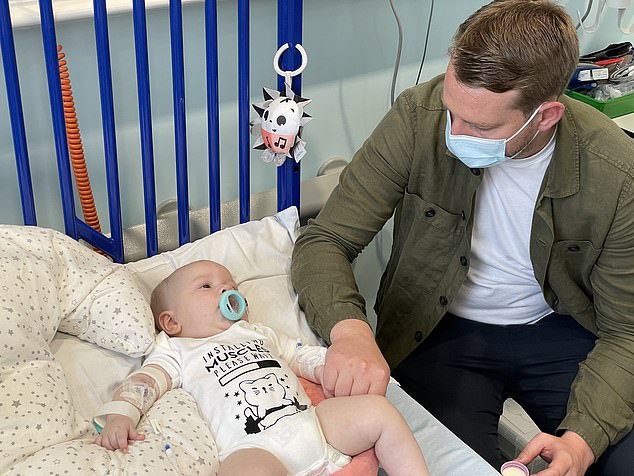 Little Arthur is pictured with father Reece at Evelina hospital in London. His father is a self-employed plasterer, and he also has an older sister called Nancy 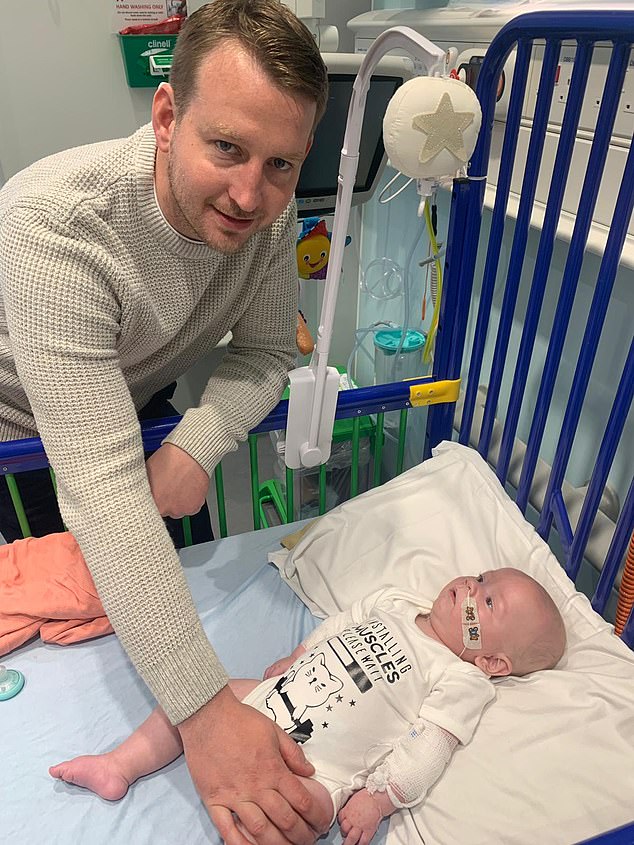 Family members described baby Arthur as the son his parents had ‘dreamt of having’ after he was born on December 22 last year.

His doting parents, from south London, had taken it in turns to stay with him in hospital because Covid restrictions only allowed one parent to visit at the same time.

The treatment Zolgensma works by replacing a faulty SMN1 gene that stops the body making the protein SMN, involved in muscle function.

The corrected gene is put into a virus (that’s had its DNA removed) which is then injected into the baby’s hand.

The gene starts making the SMN protein which prevents the loss of motor neurons — nerve cells that help co-ordinate movement in the spinal cord. These neurons send signals to the muscles.

In a study of 15 babies treated with Zolgensma published in the New England Journal of Medicine in 2017, all 15 were alive at 20 months of age, compared with 8 per cent among an untreated group from the past.

Twelve of the children received a higher dose, and at 20 months 11 could sit unaided and two walked independently.

Sixty children in the UK are born with SMA every year.

Dr Elizabeth Wraige, consultant paediatric neurologist at Evelina London Children’s Hospital who treated Arthur, said: ‘This treatment will bring hope to families affected by SMA who have fought so courageously against it.’

NHS chief executive Sir Simon Stevens added: ‘It is fantastic news that this revolutionary treatment is now available for babies and children like Arthur on the NHS.

‘The NHS Long Term Plan committed to securing cutting edge treatments for patients at a price that is fair to taxpayers.

‘Zolgensma is the latest example of the life-changing therapies that the NHS is now routinely using to transform the lives of patients and their families.’

Health Secretary Matt Hancock said: ‘I am so glad young Arthur can access this potentially life-changing treatment on the NHS. I hope it grants his family and many others renewed hope that more children’s lives can be transformed.’

Relatives have set up a fundraising page, which has so far raised £25,000, to help the family juggle looking after Arthur’s older sister Nancy at the same time as helping their son through his life-changing treatment.

‘Over the coming months, it became apparent that Arthur wasn’t hitting the same milestones as other babies and concerned, Rosie took him to their GP where they were advised to take him to A&E,’ they wrote on the GoFundMe page.

‘He was transferred to the Evelina Children’s Hospital in London where tests confirmed the doctors fears that Arthur has Spinal Muscular Atrophy Type 1 (SMA1).’

They added: ‘This situation, as you can imagine, is extremely difficult for them. And it is likely Arthur will spend a great deal of time in and out of hospital.

‘Being told that your precious baby boy may not live to see his second or even first birthday, is something no parent should ever have to hear but watching how Reece and Rosie have dealt with this situation has filled our family with pride at what a fantastic job they are doing and how strong they are being.

‘What we are hoping to do is raise enough money so as Reece and Rosie can continue to concentrate on Arthur’s fight and bringing up Nancy without having these money worries looming over them.

‘We would love to ease the financial pressure especially with Reece being self employed and uncertainty over when Rosie can go back to work.’

Sally-Anne Tsangarides, General Manager at Novartis Gene Therapies in the UK said: ‘Novartis is delighted to be part of this remarkable milestone — it is a hugely important step for babies in England diagnosed with this devastating genetic condition and we thank all those who have been involved in the landmark agreement that has made it possible.’