Six Takeaways From the Vice-Presidential Debate

Vice President Mike Pence and Senator Kamala Harris sat a dozen feet apart on Wednesday, separated by plexiglass and an ideological chasm, for a 90-minute debate that for all the hype seems unlikely to affect the trajectory of presidential campaign.

Ms. Harris wanted to talk about President Trump. Mr. Pence wanted to talk about Joseph R. Biden Jr. And neither had much interest in answering any of the questions posed by the moderator — or by the other candidate — leading to a mostly staid series of two-minute set pieces.

It was civil. It was conventional. It was not especially scintillating or revealing. But that was still a vast improvement over the unruly shout-out that Americans suffered through last week in the first presidential debate. It even felt normal — minus the plexiglass plates erected onstage — as neither candidate focused on the most compelling news development in the nation: Mr. Trump’s contracting of the coronavirus, his hospitalization and return to the White House amid unanswered questions about the full nature of his medical status.

By the end of the night, the disciplined debate seemed a news cycle or a presidential tweet away from being forgotten, and for a Biden ticket that is ahead in the polls, that is welcome news. That is the first of six takeaways from the lone vice-presidential debate, with 27 days left until Election Day:

The race was not upended.

It was telling that a fly that landed on Mr. Pence’s head partway through the debate was among the biggest buzz generators of the night. (So much so that the Biden camp sought to monetize it with the sale of “Truth over flies” fly swatters.)

For all the high Democratic expectations around Ms. Harris and her past debate performances, she did not eviscerate Mr. Pence. As for Mr. Pence, he turned in an effective, dutiful, conservative case for Mr. Trump, the likes of which the president rarely articulates himself.

“There are things the campaigns can use from this,” said Matt Gorman, a Republican strategist. “But the trajectory of the race is in the same place it was 24 hours ago.”

And that trajectory is not good for Mr. Trump.

“Mike Pence threw snacks to his base but offered nothing substantive to gain ground,” said Jess O’Connell, a Democratic strategist.

Given the age of Mr. Biden, 77, and the fact that this would be a 74-year-old Mr. Trump’s final term, it is quite possible that clips from the debate could have a bigger impact on the 2024 race than on 2020.

Harris tried to keep 2020 as a referendum on Trump … 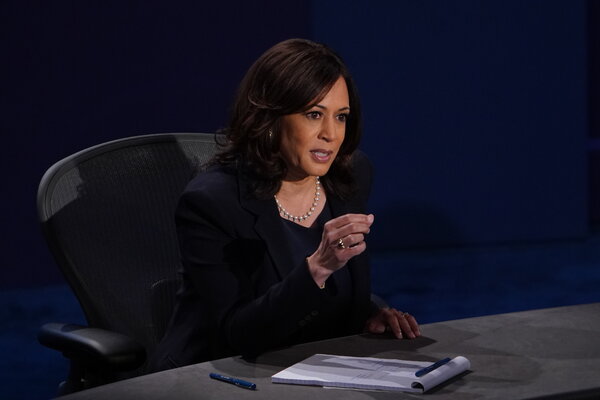 It is not often that the first lines of a debate will be among the most important, but the opening answer from Ms. Harris succinctly summarized not just her strategy for the next 90 minutes, but the Democratic plan for the final four weeks: “The American people have witnessed what is the greatest failure of any presidential administration in the history of our country.”

She was talking about the coronavirus. And she looked straight into the camera to deliver a devastating critique of the Trump administration’s handling of the pandemic, ticking off a series of blunt and brutal statistics: 210,000 dead, seven million cases, one in five businesses closed and more than 30 million filing for unemployment.

Ms. Harris navigated the potentially tricky waters of attacking the administration without personalizing matters around a president still battling the virus.

She accused the administration of muzzling the truth (“They knew, and they covered it up”) and of not having a clear path forward (“They still don’t have a plan”).

And that was just in her first two minutes. She ended with an exclamation point: “This administration has forfeited their right to re-election.”

Mr. Pence had few strong answers. He acknowledged the “very challenging time” the nation had been through while trying to focus on some of Mr. Trump’s early actions, like suspending travel from China. But his final thought in his first scripted response was a swipe at Mr. Biden, saying that the Democratic plan for Covid-19 looked “a little bit like plagiarism, which is something Joe Biden knows a little bit about.”

… while Pence wanted to make the election an ideological choice.

Mike Pence was most comfortable on the economy and the traditional Republican message of cutting taxes and regulations, pitching the specifics of the Trump tax cuts in more granular and understandable detail than Mr. Trump managed in his own debate performance.

“The American economy — the American comeback is on the ballot,” Mr. Pence said.

Over and over, he redirected — sometimes smoothly and sometimes not — questions back to the Biden agenda. When Ms. Harris said that Mr. Biden would repeal the full Trump tax bill, he jumped in to say that doing so would increase taxes for many Americans. (Ms. Harris clarified with Mr. Biden’s pledge not to raise taxes on those earning less than $400,000 per year.)

The point was not the specifics. It was to frame the election as a choice between competing visions, even if Mr. Pence intentionally sought to blur the differences between Ms. Harris’s own positions during the primary, such as embracing the Green New Deal and opposing fracking, with those of Mr. Biden, who has not taken those positions.

When in doubt, Mr. Pence returned to economics, including when he was asked if climate change was an existential threat. Mr. Pence paused, dodged (“with regard to climate change, the climate is changing”) and pivoted to the safe space: “Once again, Senator Harris is denying the fact that they’re going to raise taxes.”

In the early stretches of the debate, Ms. Harris took an extended opportunity to not just defend Mr. Biden’s credentials but also, step by step, walk through her own: a former San Francisco district attorney, California attorney general, United States senator (“only the second Black woman”) and member of the Senate Intelligence Committee.

“Women always have to overcompensate on résumé,” remarked Alexis Grenell, a Democratic strategist. “Men are evaluated based on potential, and women have to come with receipts. You can hear that in Kamala’s answer.”

There were other gender dynamics at play, including Mr. Pence’s regular interruptions.

It was hard not to see the interjections and pushback refracted through the lens of gender in a contest where the outsize support of women is lifting the Democratic ticket. (In the end, CNN calculated the two candidates had almost equal time.)

Karen Finney, a Democratic strategist, said that Ms. Harris “clearly came prepared with strategies for Pence interrupting, talking over her and running over time.”

“She was no doubt aware of the various dynamics and need to thread the needle on balancing being assertive and letting certain attacks go at points so as not to be seen as ‘angry’ or ‘overly aggressive,’ which are common sexist racist tropes about women,” said Ms. Finney, who was an adviser on Hillary Clinton’s 2016 campaign.

Mr. Pence, it should be noted, was the only man onstage on Wednesday, with Ms. Harris across from him and Susan Page, the Washington bureau chief of USA Today, serving as moderator.

Harris got tangled up on the courts.

The weakest moment of the night for Ms. Harris came on the courts, when Mr. Pence challenged her directly to answer whether she and Mr. Biden would endorse expanding the Supreme Court if Mr. Trump’s nominee for the current vacancy, Judge Amy Coney Barrett, was seated.

The Biden campaign has clearly decreed that not answering this question — the former vice president has evaded it himself — is more politically palatable than any actual answer it might give. And on Wednesday night, that put Ms. Harris in a bind.

“She will be in media trainings as an example of what not to do when avoiding a question,” said Mr. Gorman, the Republican strategist.

With four weeks until the election — and upcoming Supreme Court confirming hearings — it is not clear how long the dodge will remain more tenable than an answer.

Ms. Harris eventually returned to familiar and safer ground when it comes to the courts: the Trump administration’s lawsuit seeking to unwind the Affordable Care Act. She turned to the camera to accuse Mr. Trump of trying to gut it “literally in the midst of a public health pandemic.”

Pence and Harris sparred on race and racial justice.

Ms. Harris’s mere presence onstage — the first woman of color on a major party ticket — was a statement in and of itself, an accomplishment Mr. Pence acknowledged directly by congratulating her on “the historic nature of your nomination.”

Still, Mr. Pence sought to undercut Ms. Harris’s credentials and appeal to Black voters, accusing her of prosecuting more African-Americans than whites and saying she did not “lift a finger” for a criminal justice bill that Mr. Trump eventually signed.

He elided the inconsistencies of making that argument moments after he had said that it would be an “great insult” to say America was “systemically racist” or that law enforcement officers have an “implicit bias.”

Ms. Harris forcefully defended her record. “I will not sit here and be lectured by the vice president on what it means to enforce the laws of our country,” she said.

The two candidates also differed on whether there had been justice for Breonna Taylor, the Black woman who was killed in her home in Louisville during a police raid. “I don’t believe so,” Ms. Harris said. “I trust our justice system,” Mr. Pence said of a grand jury’s decision not to press murder charges against officers.

It was a disagreement — but, like much of the night, an expected and uneventful one.

The debate between Mike Pence and Kamala Harris featured sharp exchanges over the Trump administration’s handling of the pandemic. Here are six takeaways.