Pelosi Presses Case to Delay State of the Union Address

WASHINGTON — Speaker Nancy Pelosi pressed her case on Thursday for postponing President Trump’s State of the Union address during the prolonged partial government shutdown, even as House Democrats privately weighed action as early as next week on a homeland security spending measure that would counter the president’s demands for a wall with their own ideas for securing the border.

“The date of the State of the Union is not a special date,” Ms. Pelosi told reporters. “It’s not constitutionally required, it’s not the president’s birthday, it’s not anything. It is a date that we agreed to.”

Early Thursday afternoon, Ms. Pelosi finally received a response from Mr. Trump to the letter she sent him on Wednesday suggesting he delay his Jan. 29 speech or deliver it in writing, but he did not mention the address. Instead, the president said in his own letter that he was postponing an overseas trip Ms. Pelosi had planned with a congressional delegation, flying on military aircraft, that was scheduled to depart from Joint Base Andrews later in the day.

At her news conference, Ms. Pelosi pushed back sharply against the notion pressed by the White House and Republicans — and privately shared by a growing number of lawmakers in her own party as well — that as the majority party in the House, Democrats have effectively sat out the negotiations by refusing to produce their own border security proposal until Mr. Trump agrees to reopen the government. 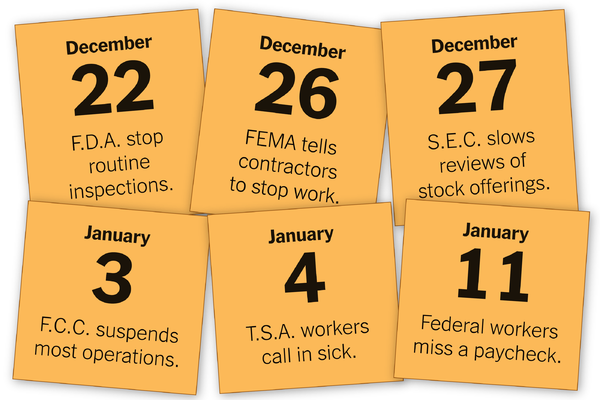 See How the Effects of the Government Shutdown Are Piling Up

The longer the federal government remains closed for business, more services are affected.

“What negotiating table have we not been at?” Ms. Pelosi said. “We are negotiating and we do go to the meetings.”

Still, Ms. Pelosi hinted that Democrats would promote their own proposals for border security in the coming days, having canceled a scheduled recess to stay in Washington and advance spending bills to reopen the government.

The move would be a substantial shift in strategy for Democrats, who have steadfastly refused to engage in a debate with Mr. Trump about border security as long as the government remains shuttered, taking the position that they will not submit a counterproposal to his demands for a wall until he signs legislation to end the shutdown. The president has consistently rejected those terms, saying he would lose his leverage and look foolish if he agreed to reopen the government without money for his signature campaign promise.

“You will be seeing many things unfolding in the next few days about what our next bills will be on the floor,” Ms. Pelosi said, repeating a litany of border security measures she said Democrats supported, including more personnel, better infrastructure at ports of entry and scanning technology to detect illicit drugs in vehicles entering the country legally.

“This has to be evidence-based, not notion-mongered,” she added, as she read reporters the results of a recent poll that found that a majority of Americans do not support a wall. 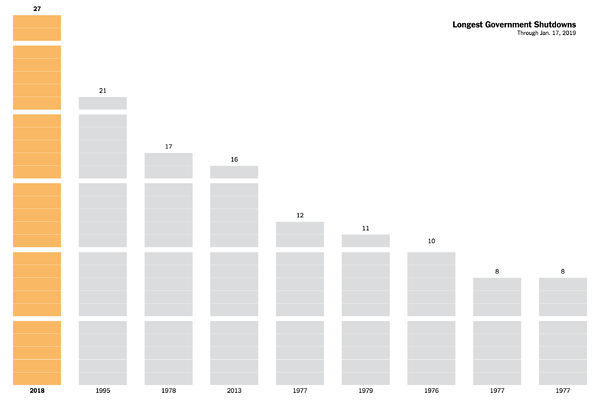 This Government Shutdown Is Now the Longest Ever. Here's the History.

The roots of Washington’s budget dysfunction date to the 1970s. Here’s a look at past shutdowns and how they led to today’s.

Representative Peter A. DeFazio, Democrat of Oregon and the chairman of the Transportation and Infrastructure Committee, told a group of committee chairmen at a closed-door meeting on Wednesday that it was time for their party to go public with its own border security ideas to answer Mr. Trump’s demands for a wall.

Among the investments that Mr. DeFazio said should be made instead are more money for Coast Guard equipment and personnel to intercept maritime drug shipments, better technology to scan vehicles legally crossing the border to detect illegal drugs, resources for costly reconfiguration of border crossings to make them more secure, and funds for additional personnel to police them.

“It’s a horrible waste of money when we have real needs,” Mr. DeFazio said of Mr. Trump’s wall, “so I just want to highlight the real needs to counter his fake proposal.”

Representative Hakeem Jeffries of New York, the chairman of the Democratic Caucus, said that after trying and failing to get Republicans to embrace spending measures they had already supported in the past, Democrats were considering whether it was time to present their own plan.

Democrats “are working through possible proposals relative to the Democratic vision for border security,” Mr. Jeffries said, “but the Republicans have consistently rejected the Republican vision, so it’s hard to know where we go from here.”