WASHINGTON — The Republican “super PAC” American Crossroads plans to pump about $7 million over the next month into a bid to secure Senator Thom Tillis’s North Carolina re-election and save the party’s Senate majority, raising fresh questions about partisanship at the United States Postal Service, where one of the political group’s leaders holds a powerful post.

The infusion — which leaders of the group said would bring its total investment in the critical race to more than $20 million — will pay to blanket the airwaves in the state with advertisements attacking Cal Cunningham, the Democrat challenging Mr. Tillis in a contest widely seen as a linchpin for control of the Senate. The deep involvement of American Crossroads, which is led in part by Robert M. Duncan, whom President Trump installed at the helm of the Postal Service’s board of governors, is the latest example of a potential conflict of interest at the highest levels of the agency charged with carrying out vote-by-mail operations for the November elections.

Mr. Duncan founded the political group and sits on its board of directors, but its spokesman said he is not involved in day-to-day operations. Still, his position has underscored how a tight-knit circle of Republican donors has risen to power at the Postal Service, and fueled concern among Democrats and government ethics specialists that their partisan preferences could compromise its independence.

“There really is a reason to feel like this almost sacred institution in American life is being politicized, and these continued actions by Robert Duncan don’t do anything to dispel that,” said Noah Bookbinder, the executive director of Citizens for Responsibility and Ethics in Washington, a liberal government watchdog group.

American Crossroads has already spent $13.8 million attacking Mr. Cunningham. The North Carolina spending spree marks the first time in six years that the group has made such a significant investment in a Senate race. So far this election cycle, it had focused on supporting Mr. Trump’s campaign in voter outreach efforts.

The ad buy, focused on two clips attacking Mr. Cunningham over health care, comes at a critical time in the race. Mr. Cunningham, who is now facing down a scandal over flirtatious texts he sent to a woman not his wife, has led the race in recent polling, including a five-point advantage in a poll conducted last month for The New York Times. He announced last week that his campaign had raised more than $28 million in the third quarter of the year, a staggering sum Mr. Tillis is not expected to match.

Mr. Duncan helped found American Crossroads with other top Republicans, including the strategist Karl Rove. The super PAC is run by Steven J. Law, a former top aide to Senator Mitch McConnell of Kentucky, the majority leader. Mr. Duncan is also a director of the Senate Leadership Fund, a super PAC linked to Mr. McConnell that has raised about $129 million.

Neither Mr. Duncan nor Mr. Law responded to requests for comment.

“Our boards, like most boards, oversee organizational policies, financial management, senior executive compensation and management performance — but are not involved in directing day-to-day operations or projects,” Jack Pandol, a spokesman for American Crossroads and the Senate Leadership Fund, said in an email.

With control of the Senate at risk, Mr. Pandol said American Crossroads was spending to protect other vulnerable Republican incumbents around the country, including Senators Susan Collins of Maine and Joni Ernst of Iowa, as well as to execute a nationwide voter registration project in politically competitive states.

Mr. Duncan’s continued involvement in partisan politics — including appearing in a recorded video at the Republican National Convention in August — while helping lead the Postal Service has for months angered Democrats, who have called for him to step down. 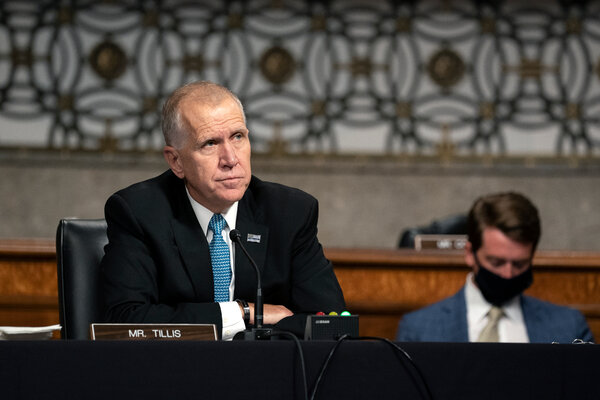 Representative Carolyn B. Maloney, Democrat of New York, and Senator Gary Peters, Democrat of Michigan, have introduced legislation that would bar board members from participating in partisan activities and disallow the hiring of a postmaster general who has made political campaign donations within four years of being appointed, as Louis DeJoy, the postmaster general installed this year, has done.

Mr. DeJoy, whom Mr. Duncan personally recommended for the job, was a major donor to Mr. Tillis. Employees at the North Carolina-based logistics company Mr. DeJoy used to run, who said they were pressured to donate to his preferred candidates, contributed nearly $300,000 to Mr. Tillis in 2014.

Postal Service leaders have done little to hide their loyalty to Mr. Trump, even as the board oversees what is expected to be a record crush of mail-in ballots this fall.

Since 2016, Mr. DeJoy has contributed more than $1.2 million in support of Mr. Trump’s campaigns.

In August, just house after Mr. Duncan assured lawmakers at a Capitol Hill hearing that he was committed to doing his job without partisan bias and according to “the public interest,” he appeared on video at the Republican National Convention, holding up four fingers and smiling as fellow Kentuckians chanted, “Four more years!”

Joe Biden traveled to Florida on Monday and will visit Arizona later this week, taking his campaign to states where new polls show him ahead. Read the latest updates.