WASHINGTON — As the debate rages among Democrats about how best to position the party to defeat President Trump in 2020, many big donors are signaling early support for expanding and firing up the party’s liberal base rather than backing centrist appeals targeting the Rust Belt.

Even though middle-of-the road Democrats helped propel the party to broad gains in the House in the midterm elections this month, especially in coastal suburbs, influential donors signaled in postelection meetings that their priority would be to back progressive appeals in Sun Belt states.

Efforts in particular to register and mobilize minority and low-income voters in the South and Southwest, they said, present greater potential return on investment for Democrats than trying to win back the white Midwestern voters who helped elect Mr. Trump.

While left-leaning Democrats fell short in some high-profile races across the South — most notably Representative Beto O’Rourke’s effort to defeat Senator Ted Cruz in Texas and Stacey Abrams’s narrow loss in her campaign to become governor of Georgia — the gains they made underscored the changing demographics of traditionally Republican states and the long-term opportunity for Democrats, the donors said.

“Once we expand the electorate in these places, there will be no turning back,” said Tory Gavito, the president and co-founder of a new coalition of mostly female donors called Way to Win.

She made her case in presentations to major donors at a conference sponsored by WDN Action, the political arm of the Women Donors Network, earlier this month in Seattle and this past week at another put on by the Democracy Alliance, an organization that includes some of the party’s wealthiest and most influential donors. She promoted the impact of her group’s “New Southern Strategy,” which included steering $22 million to political efforts in the South and Southwest before the midterms.

“The concentration of young people, poor people and people of color who used to sit on the sidelines because Democrats have not inspired them will upend the map,” she said in an interview.

That assessment aligns with the passions of the party’s increasingly powerful small-donor base, creating a potentially potent early financial foundation for prospective presidential candidates who appeal to the party’s left flank.

The nominating process remains in its earliest stages, and there is nothing approaching unanimity among Democrats and their financial supporters about the best path to 2020, much less the best candidate. Many of those likely to run will try to straddle the party’s ideological, geographical and generational divides, even as Mr. Trump continues to face challenges that could reshape the political landscape before Election Day.

But at the recent donor conferences, centrist groups and think tanks affiliated with the moderate wing of the Democratic Party mostly took a back seat to organizations promoting more liberal ground organizing efforts focused on expanding the electoral map. 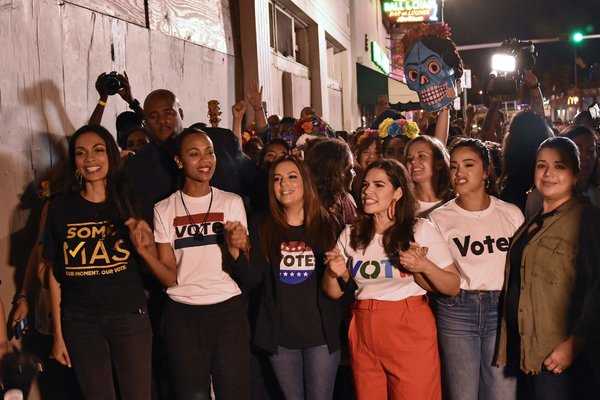 At the annual winter meeting of the Democracy Alliance at a downtown Washington hotel this past week, the agenda featured groups focused on registering and mobilizing voters in Arizona, Georgia, Kansas, Kentucky, Oklahoma, Tennessee and Texas.

The description for a session moderated by Ms. Gavito on “building progressive power in red states” declared that “one clear message of 2018 is that the progressive electoral map is widening,” and could include Sun Belt states, and even deep-red states like Alaska, thanks to long-term investments in ground organizing.

Conference leaders credited such efforts with helping progressive Democrats such as Mr. O’Rourke, Ms. Abrams and Andrew Gillum, who narrowly lost the governor’s race in Florida but has yet to concede, run more competitive races than they otherwise might have.

The leaders of several groups that worked to mobilize minority voters — including Black Voters Matter, BlackPAC, New Florida Majority and Color of Change — were granted coveted spots at the conference, allowing them to develop potentially lucrative relationships with the major donors in attendance.

Since its creation in 2005, the Democracy Alliance has played a significant role in shaping the institutional ecosystem of the political left by steering more than $1.6 billion to recommended liberal and Democratic groups, according to an alliance official.

It has helped to fund an array of new nonprofit groups dedicated to taking on Mr. Trump. Its ranks include some of the left’s most prolific donors, such as the billionaire investors George Soros and Tom Steyer. This past week’s meeting drew appearances from several Democratic politicians, including Representatives Adam B. Schiff of California and Pramila Jayapal of Washington, as well as Senator Jeff Merkley of Oregon and Governor-elect Jared Polis of Colorado, a former Democracy Alliance donor.

The House Democratic leader, Representative Nancy Pelosi of California, a favorite of the donor class whose bid to be elected House speaker has been complicated by opposition from her party’s left flank, appeared with a handful of newly elected female Democratic members of Congress at a reception on Friday night celebrating female leaders. She was introduced as “the original badass woman in Washington and the next speaker of the House” by Lee Saunders, president of the American Federation of State, County and Municipal Employees, according to an attendee.

At the conference, which was closed to journalists, hundreds of donors and operatives kibitzed and debated the lessons of the midterms and the party’s options for 2020 in formal sessions and sideline gaggles. A New York Times reporter was escorted by an alliance staff member away from a second-floor banquet hall that hosted catered meals and a Thursday evening reception with an open bar and passed hors d’oeuvres, including tuna poke in waffle cones, and prosciutto and mozzarella skewers with a balsamic glaze.

In interviews on the sidelines of the conference, most donors seemed bullish on the emerging strategy, which amounts to a shift of sorts. In the weeks after Mr. Trump’s election, some in the group had warned of dire consequences if the party did not win back the white suburban and Rust Belt voters who had voted Democratic in recent presidential elections before swinging to Mr. Trump.

“The data bears out that there is in fact a new American majority of people of color and progressive white voters,” said Steve Phillips, a Democracy Alliance donor who participated in a Thursday panel about winning elections in the age of Trump. Mr. Phillips, who was solicited afterward by a succession of activists seeking support for groups targeting minority voters, said in an interview that “a lot of the donors are stepping up” to support such groups.

Mr. Phillips has long called for Democrats to forsake centrist appeals and candidates, including in the 2020 presidential primary, and he suggested that other donors would be wise to do the same. “We should certainly reduce the amount of resources we put in that direction if we want to win,” he said.

Gara LaMarche, the president of the Democracy Alliance, did not dispute the club’s heightened focus on progressive organizing, but he said that it was not mutually exclusive with policy work and efforts to appeal to Rust Belt voters.

“It’s not about abandoning white working-class voters,” he said in an interview. “It’s about expanding the electorate and giving people reason to vote.”

In a speech to the assembled donors on Thursday, he praised “unapologetically progressive candidates who excite and inspire core progressive voters,” according to his prepared remarks. And he singled out the efforts of other groups and donor coalitions that steered funds to help such candidates, including Way to Win.

Way to Win is funded in large part by more than 120 female donors, including Susan Pritzker, a member of the family whose fortune stems from Hyatt Hotels. She traced her involvement in the coalition to the 2016 election, which she called “a brutal wake-up call, throwing into sharp relief how broken our democratic processes had become.” Way to Win consists of a political action committee called Way to Lead that donated money this year directly to candidates and a pair of nonprofit groups that donated millions more to groups organizing in those candidates’ states, with a particular focus on Arizona, Florida, Georgia, Virginia and Texas.

The goal is “to shift the way political giving happens” away from advertising and other outreach done by national groups, and toward ground organizing controlled by local groups, according to one of the group’s founders, Leah Hunt-Hendrix.

A granddaughter of the Texas oil billionaire H. L. Hunt, Ms. Hunt-Hendrix, who is also a Democracy Alliance member, is among the most influential young donors on the left.

“One of the problems with political giving on the right and the left is when it’s used to move a donor’s agenda, whether it’s Wall Street, tech or oil,” Ms. Hunt-Hendrix said in an interview. Way to Win was created to counter factions of the Democratic donor class that she said were “socially liberal but unwilling to challenge corporate power and the accumulation and concentration of wealth.”

In an op-ed article last year, she suggested that donors boycott nonprofit groups aligned with the Democratic establishment, such as the centrist think tank Third Way and the nonprofits spearheaded by the conservative-turned-liberal operative David Brock. She deemed those groups part of the “neoliberal wing of the Democratic Party,” which she blamed for thwarting progressive movements like the 2016 primary campaign of Senator Bernie Sanders of Vermont.

But Mr. Brock and his groups still garner significant support from the party’s major donor class, including from Democracy Alliance members. One of his groups hosted a dinner presentation on Wednesday night highlighting its 2018 efforts, which drew more than 40 top donors.

And Matt Bennett, an executive at Third Way, said it would be “insane” to minimize efforts to win back traditional “blue wall” states like Michigan, Pennsylvania and Wisconsin that Mr. Trump won in 2016.

“By all means, let’s try to engage more voters in these emerging places like the South,” he said. “But to try to extend ourselves into tough states while neglecting to rebuild in the states where we traditionally won presidential races would be political malpractice.”