Police have arrested three people as part of an investigation into alleged antisemitism among Labour Party members.

The first arrest, of a man in his 50s in Birmingham, took place on 7 March.

This was followed by the arrests of of a second man in his 50s in Tunbridge Wells, Kent, on 14 March and a woman in her 70s in Wandsworth, south London, on 21 March.

The trio were held on suspicion of publishing or distributing material likely to stir up racial hatred.

They have been released pending further inquiries.

“Antisemitism has no place in our society and we are committed to challenging and campaigning against it in all its forms.” 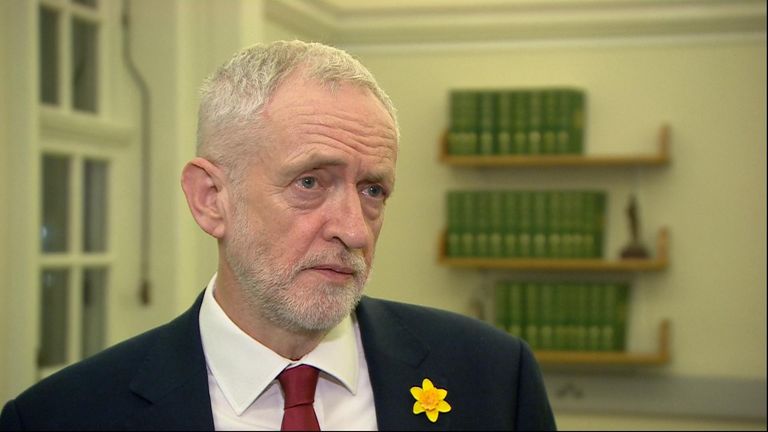 It was passed to Metropolitan Police Commissioner Cressida Dick following an interview in September.

The force launched a formal inquiry in November.

Disciplinary action is understood to have been taken by Labour against the three individuals believed to be under investigation, none of whom are now party members.

Scotland Yard said the contents of the dossier had been examined by specialist officers and the three individuals arrested were interviewed under caution before being released pending investigation.

Jewish groups have accused Jeremy Corbyn and the party of not taking strong enough action to address antisemitism claims.

In an exclusive interview with Sky News, Mr Corbyn said there was “no place for harshness, bullying or anything else in the party”.

He has told Labour general secretary Jennie Formby to make rooting out antisemitism her number one priority.

The Board of Deputies of British Jews, the Community Security Trust and the Jewish Leadership Council said in a joint statement: “It is highly significant that the Metropolitan Police have now made three arrests in connection with Labour’s antisemitism problem.

“We await the outcome of the investigations, but ask why Labour had not itself alerted the police.

“We are also concerned as to how many more cases remain unknown and repeat our request, made one year ago to Mr Corbyn, that the party urgently appoint an independent ombudsman on such matters.”