WASHINGTON — A federal judge pressed lawyers for the Justice Department and for Michael T. Flynn, President Trump’s former national security adviser, on Tuesday about why he should grant the request to dismiss a criminal case against Mr. Flynn, who twice pleaded guilty to lying to the F.B.I.

But Judge Sullivan announced no ruling at the conclusion of the roughly four-hour — and, at times, heated — hearing. The judge said that he was mindful of an appeals court instruction to rule expeditiously in the high-profile matter, but also that the case record he had to review was “voluminous” and told the lawyers to file certain additional materials within a week.

The hearing, conducted by teleconference because of the coronavirus pandemic, had been scheduled for July and was delayed more than two months because of a failed effort by Ms. Powell to get an appeals court to order Judge Sullivan to end the case without review.

After it became clear that Mr. Flynn was lying to his colleagues, including Vice President-elect Mike Pence, about his conversations with the Russian ambassador in December 2016, the F.B.I. questioned him about the calls in January 2017. F.B.I. investigators concluded that Mr. Flynn lied to them too, and he was charged with making a false statement by the office of the special counsel, Robert S. Mueller III, after he took over the investigation. Mr. Flynn pleaded guilty.

Mr. Trump initially distanced himself from Mr. Flynn, whom he had fired, but eventually began to use his case to attack the Russia investigation. After Mr. Flynn became a cause for Mr. Trump’s supporters, he changed defense lawyers and sought to withdraw his guilty plea, claiming that he did not lie after all.

Mr. Barr then sought to withdraw the prosecution, but rather than immediately granting the request, Judge Sullivan has begun a review of whether it was legally justified. Much of what was discussed in the lengthy hearing has already been debated extensively in previous court filings and before the appeals court.

The Justice Department sought to make a separation-of-powers argument. Hashim M. Mooppan, a political appointee from the Office of the Solicitor General, argued that as a matter of law, Judge Sullivan had no choice but to grant the dismissal. Mr. Mooppan argued that it was up to the executive branch to decide whether to bring or drop charges against someone. The judge’s role, he said, was limited to making sure an individual prosecutor had not gone rogue.

“As long as it is the authoritative position of the executive branch, that is the end of the matter,” Mr. Mooppan said.

Against that view, John Gleeson, a retired federal judge and former mafia prosecutor whom Judge Sullivan appointed to critique the government’s request, argued that once the executive branch has put a case before the judicial branch, a judge has the right to reject a request to dismiss the charge if that request is an attempt to elicit the judicial branch’s complicity in what is a corrupt, politically motivated decision — as he said this was.

“You’re not required to act like you were born yesterday,” Mr. Gleeson said. 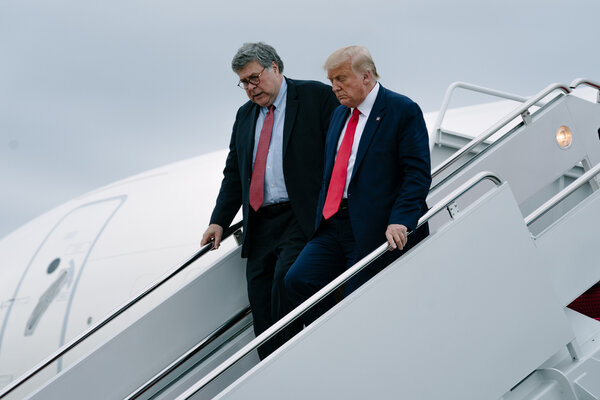 Focusing on how the Justice Department has put forward a shifting array of rationales for why Mr. Barr decided to move to end the case amid public signs of pressure from Mr. Trump — like what he said were more than 100 tweets about the case — Mr. Gleeson argued that the explanations were “pretext” for an illegitimate decision to give special treatment to a presidential favorite.

If Mr. Trump wants to eliminate Mr. Flynn’s legal troubles, Mr. Gleeson said, the president should pardon him rather than making the Justice Department and the judicial branch contort themselves to justify special treatment.

The Justice Department also put forward a senior and veteran career prosecutor in the office of the U.S. attorney for the District of Columbia, Ken Kohl, who denied that the department had reversed course in the case for political reasons.

Mr. Kohl denied that the department had reversed course in the case for political reasons. He said that the decision was justified by a department review of the case begun after Mr. Flynn sought to withdraw his guilty plea and that the audit of case files raised questions about the F.B.I.’s actions and whether prosecutors could prove to a jury that Mr. Flynn was guilty.

Mr. Kohl pointed as well to findings by an inspector general investigation to say that the two agents who interviewed Mr. Flynn at the White House in January 2017 — Peter Strzok and Joe Pientka, who would be key witnesses in any trial — were tainted. Mr. Strzok had sent text messages to a colleague indicating that he did not like Mr. Trump; Mr. Pientka helped supervise error-riddled applications to wiretap a different former Trump campaign adviser who was under investigation as part of the F.B.I.’s Russia investigation, Carter Page.

“The I.G. knocked out all of our witnesses in this case,” Mr. Kohl said.

Mr. Gleeson, however, scoffed. He pointed out that the Justice Department did not need to prove Mr. Flynn’s statements because he had already pleaded guilty. He also said that the department would argue in any other case that bias by agents or violations of internal rules were irrelevant, and maintained that it would be easy to prove Mr. Flynn lied.

Separately, in a letter docketed on Monday night, a lawyer for Mr. Strzok told Judge Sullivan that someone had altered handwritten notes by his client in one of the recent batches of internal materials turned over to Ms. Powell — adding two dates to them that he did not write, including one that suggested a White House meeting happened earlier than it did.

Judge Sullivan ordered the Justice Department to provide a sworn declaration certifying whether the materials submitted to him “were true and accurate,” saying he was “floored” by the “unsettling” claim that they had been modified.

Ms. Powell sparred with Judge Sullivan, initially resisting his demand that she tell him whether she had spoken with Mr. Trump about the case on the grounds that it was subject to executive privilege.

After he pointed out that she did not work for the government, and so the privilege did not apply to her, she said she had recently briefed Mr. Trump about developments in the case and asked him not to pardon her client. Pressed further, she cited The New York Times as reporting that she had spoken to Mr. Trump at least five times.

As she has many times before, Ms. Powell also portrayed the case against her client as a corrupt and politically motivated conspiracy and demanded that Judge Sullivan recuse himself. He told her to file a written motion for recusal if she wanted.