With just 10 days to go until the polls open, Jeremy Corbyn will announce plans to slash regulated rail fares in England by a third from next month if his party enters government.

The Tories, meanwhile, will set out a range of measures to strengthen border security after Brexit including automated entrance and exit checks to identify individuals who have overstayed their visa.

Mr Corbyn will use a visit to a railway station to announce the plans which he says would save the average commuter more than £1,000 a year, and would represent the biggest ever reduction in rail fares.

It comes after Britain’s train companies confirmed over the weekend that they will hike prices by an average of 2.7% next year.

Children aged 16 and under would receive free rail travel under the party’s plans, while part time workers would be guaranteed “fair” fares.

Labour estimate the policy will cost £1.5bn per year and would come from existing Department for Transport budgets, drawn from vehicle excise duty.

Mr Johnson will visit a port as the Conservatives unveil a five-point plan to strengthen border security after Brexit.

People will be counted in and out of the country as part of the proposals which would also make biometric passports a requirement and see the introduction of an American-style visa waiver scheme.

The party hopes the Electronic Travel Authorisation (ETA) would provide an enhanced ability to screen arrivals against watchlists and block those deemed to be a threat from entering the UK.

The Liberal Democrats have pledged to invest an additional £11bn over five years into transforming mental health services.

The party said it would make prescriptions for people with chronic mental health conditions available for free on the NHS among a raft of measures to improve services. 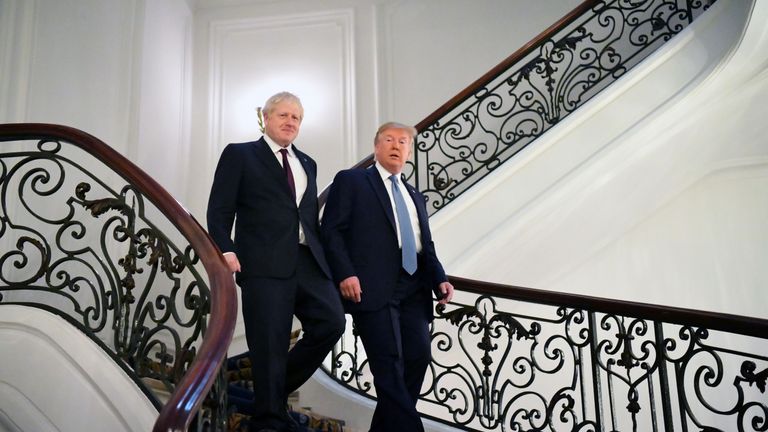 Sunday night saw the latest seven-way TV election debate hosted by ITV in which the parties clashed over the US president who arrives in the UK today ahead of a meeting of Nato leaders.

Liberal Democrat leader Jo Swinson said that, while the relationship with the US was important, Mr Trump, who had spoken of sexually assaulting women, did not share British values.

“The last thing we should have done is to roll out the red carpet for a state visit,” she said.

Labour’s shadow justice secretary Richard Burgon said Mr Trump and the prime minister were both politicians who had “given the green light to sexism, homophobia and racism”.

However for the Conservatives, Treasury Chief Secretary Rishi Sunak said that the relationship with the US was essential to Britain’s national security and should not be denigrated.

The Brexit Election on Sky News – the fastest results and in-depth analysis on mobile, TV and radio.