Mr Kershaw claimed the scenario would be the “worst case” and that the UK’s departure from the EU could instead unite the remaining 27 members. The historian told German news website T-Online: “In the worst case, Brexit may become the beginning of the end of the EU. But it could also be that the rest of Europe will get closer together.”

Mr Kershaw added that Brexit is a sign that Europe is “crumbling”.

He said: “Of course, it is not a glorious moment for the EU if such a big country is turning its back to it. So we can already speak of a critical phase for Europe.”

The historian also hit out at former prime minister David Cameron for holding the referendum in 2016.

He said: “Cameron’s decision on the Brexit referendum was simply due to arrogance. 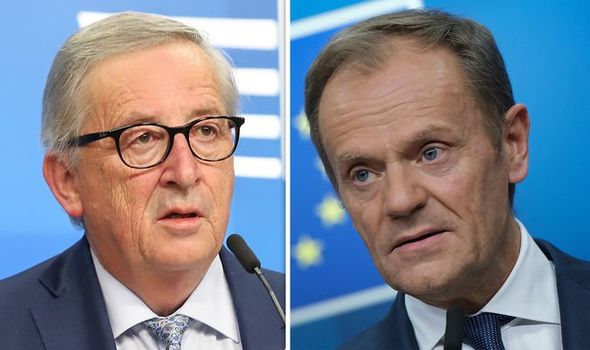 “In 2014, the Scots voted to stay in the UK, so Cameron believed he would easily survive the Brexit referendum.”

Mr Kershaw added that the public vote “asked for a very simple answer to a very complicated question”.

And the historian claimed the EU is often blamed for unpopular politices.

He said: “People are looking for a scapegoat for unpopular decisions or mistakes – and they are usually found in Brussels.

“Many people do not see the benefits the EU brings to people.”

With Brexit delayed until October 31, Mr Kershaw said it gives time for a second referendum or for the UK to remain in the bloc.

Mr Kershaw said: “It takes extra time to come up with a new concept to prepare for either Brexit or remaining in the EU.

“Maybe a new referendum, which then brings a different result.

“So there’s hope in Brexit. Nobody knows what will happen in the end. Not even Theresa May.”