Happy New Year! We hope you’re rested and ready for all that 2019 will bring. This is On Politics, your guide to the day in national politics. I’m Lisa Lerer, your host.

[Get On Politics delivered to your inbox.]

When supporters of Elizabeth Warren gathered on Capitol Hill today, they were ostensibly celebrating the Massachusetts senator’s swearing in to a second term.

But it was hard to miss that crackle of presidential politics in the air. “The state of Warren nation is strong,” shouted a gleeful Senator Ed Markey, as he introduced Ms. Warren to her fans. “The chief is here.” Not long after, President Trump tweeted a meme featuring a “Warren 2020” sticker edited to mock her.

Ms. Warren’s highly choreographed announcement on Monday that she is exploring a bid for president was the political version of firing a starting pistol for the 2020 Democratic primary. She is the highest-profile Democratic contender to have entered the race, with national poll numbers, substantial grass-roots support and a sizable donor network. She’s even headed to Iowa this weekend.

But, honestly, at this point, there isn’t all that much of a game. Yes, more than three dozen candidates are considering running. And yes, as my colleague Alex Burns and I covered in the paper over the weekend, they’re interviewing staff, scouting headquarters and fleshing out financial plans.

But almost no one is actually running — at least not yet. We’re still in that period of wild speculation. And with little visibly happening, political clichés like “likability” and “electability” are bound to appear out of the ether to fill the void.

That’s part of what Ms. Warren discovered this week.

Within hours of her tweet, she was “battling the ghosts of Hillary Clinton” to avoid being written off as unlikable. She was a “below par candidate,” based on the size of her Senate victory in deep blue Massachusetts, who faces real “electability” problems.

It’s hard to see how these terms apply in the traditional sense in 2020. For the first time in 15 years, Democrats have an open field with no establishment favorite, so measuring electability is pretty difficult. And besides, being in the establishment may not be the asset it once was considered. At this point in 2015, Mrs. Clinton was seen as the most electable, even if she wasn’t likable — and we all know how that story ended.

The Democratic pollster Margie Omero says terms like “likability” aren’t quite accurate in the Trump era. And you should forget about the old political chestnut that voters want “the guy they can have a beer with.”

“Obviously, people want someone that they like,” says Ms. Omero. “But this sense that likability is the be-all and end-all of how voters view candidates is not really consistent with how we explore public opinion.”

A better measure, she says, comes from tracking job approval, empathy and the sense voters have that a candidate will fight for people like them. “There are plenty of successful politicians out there who seem like they’re striving more to be tough fighters than huggy, baby-kissing kind of candidates,” says Ms. Omero.

You might notice that they’re all men. That’s not surprising.

A whole body of academic research on “likability bias” shows it’s not enough for female leaders to be qualified — they have to be likable, too. Take Representative Nancy Pelosi, for example. For years, she’s been a top target of Republicans in attack ads, a situation her opponents often attribute to the fact that she’s a San Francisco liberal. But her equivalent in the Senate, Chuck Schumer, is a liberal from Brooklyn and far less targeted by Republicans.

For her part, Ms. Warren largely refused to engage with issue of sexism or likability when I caught up with her on Capitol Hill today, dismissing the debate as a distraction. “I’m going to keep fighting on the issues because I think that’s what matters most,” she said.

But her team saw some the value in the conversation: On Wednesday, they sent out a fund-raising email with the subject line “likability.”

So, does this mean that if you don’t like Ms. Warren, you’re sexist? Obviously not. There are plenty of reasons for Democrats to decide that Ms. Warren shouldn’t be their nominee in 2020.

But perhaps there needs to be a bit more specificity in the conversation when we talk about who we like and who we don’t — and what, exactly, that means.

[Sign up here to get On Politics in your inbox.]

It was a big day in Congress, as overjoyed Democrats assumed control of the House and Vice President Mike Pence administered the oath of office to incoming senators. Even President Trump got in on the action, talking to reporters in a surprise first visit to the White House briefing room.

The celebratory mood isn’t likely to last long. Overshadowing the day’s festivities was the political impasse over the government shutdown, which Senator Richard Shelby warned could go on for “months and months.”

Nancy Pelosi was elected speaker. As expected, Ms. Pelosi returned to her post leading Congress, making it official that Democrats now control the House of Representatives. “Our nation is at a historic moment,” she said. “This Congress will be bipartisan, transparent and unified.”

Not all Democrats supported her. Keeping with the pledges they made on the campaign trail, more than a dozen Democrats, mostly freshman, cast their speaker votes elsewhere — including one for Joe Biden and another for Stacy Abrams. (See the full list here.)

The Senate was sworn in, too. On the other side of the Capitol, things were a little more subdued, as Mr. Pence swore in more than 30 new senators. That chamber remains in Republican control, 53 to 47.

With winter break behind us, it’s time to snap out of our egg nog-induced haze and catch up on the stories we missed. Here are some of our favorites from the past couple weeks:

• After nearly two years of assessing the accuracy of President Trump’s statements, The Times’s chief fact checker stepped back to look at the scale of the president’s mendacity, and how he uses inaccurate claims to advance his agenda, criticize the news media and celebrate his achievements. Read her conclusions here.

• Black voters are keenly aware of the prominent role they will play in choosing the next presidential nominee. This time, they expect more than token attention from the candidates. Read the story.

• The daughters of a foot doctor in Queens say that during the Vietnam War, their father came to a young Donald J. Trump’s aid with a diagnosis of bone spurs. The doctor’s landlords? The Trumps. “I know it was a favor,” said one daughter. Read our investigation.

• When Mr. Trump made his first visit to a war zone last week, the trip was a tightly guarded secret. But there was one surprising source who cracked the mystery: a semiretired information technology specialist in England, looking out his kitchen window. Here’s how he figured it out.

What to read tonight

• The most sensible response to the falling stock market? Doing nothing. At least that’s the advice of The Upshot.

• A toddler in Afghanistan was the only member of her family to survive a roadside bomb. Their story travels down a road of poverty and loss in the war-torn country.

• “You must go to Iowa.” The irreplaceable Alexandra Petri takes on the 2020 guessing game. So much truth.

The best part of swearing-in day? A Congress crawling with the kids and grandkids of lawmakers.

As Nancy Pelosi was sworn in as speaker, she called for the children in the chamber to join her, leading to a swarm of kids at the podium. 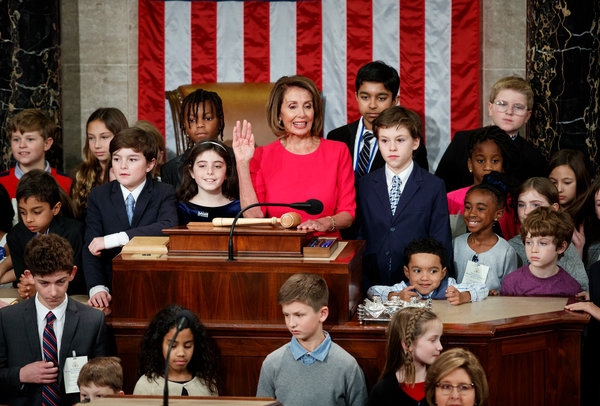 But maybe the best moment of the day was when Representative Rashida Tlaib’s sons dabbed as she cast her vote for speaker.

Were you forwarded this newsletter? Subscribe here to get it delivered to your inbox.

Thanks for reading. Politics is more than what goes on inside the White House. On Politics brings you the people, issues and ideas reshaping our world.

Is there anything you think we’re missing? Anything you want to see more of? We’d love to hear from you. Email us at [email protected].