Home » Politics » Behind the Whistle-Blower Case, a Long-Held Trump Grudge Toward Ukraine

Behind the Whistle-Blower Case, a Long-Held Trump Grudge Toward Ukraine

The pressure was so relentless that Mr. Zelensky dispatched one of his closest aides to open a line of communication with Rudolph W. Giuliani, one of Mr. Trump’s personal lawyers. Mr. Giuliani was the loudest voice among those demanding that Ukraine look at Mr. Biden’s dealings with the country when he was vice president at the same time his younger son, Hunter Biden, was doing business there.

Over breakfast in early July at the Trump International Hotel, Mr. Zelensky’s aide asked the State Department’s envoy to Ukraine for help connecting to Mr. Giuliani. Several days later, the aide discussed with Mr. Giuliani by phone the prospective investigations as well as something the Ukrainians wanted: a White House meeting between Mr. Zelensky and Mr. Trump.

But if Mr. Zelensky’s goal was to reduce the pressure to pursue the investigations and win more support from the White House — not least for Ukraine’s fight against Russia — he would be disappointed.

On July 25, two weeks after the first call between Mr. Zelensky’s aide, Andriy Yermak, and Mr. Giuliani, Mr. Zelensky had a call of his own with Mr. Trump. During their conversation, Mr. Trump pressed for an investigation into Mr. Biden and repeatedly urged Mr. Zelensky to work with Mr. Giuliani, according to people familiar with the call.

In the weeks after the call, events unfolded rapidly in a way that alarmed some officials in both countries. They interpreted the discussions as dangling support to Ukraine in exchange for political beneficial investigations.

On Aug. 12, a whistle-blower filed a complaint with the intelligence community inspector general that was at least in part about Mr. Trump’s dealings with Ukraine, according to two people familiar with the matter.

Around the same time, Mr. Giuliani met face-to-face in Spain with Mr. Yermak to press again for the investigations and to discuss the status of the prospective Trump-Zelensky meeting. The State Department acknowledged that its envoy had helped connect Mr. Giuliani and Mr. Yermak, and Mr. Giuliani said he briefed the department on his discussions. 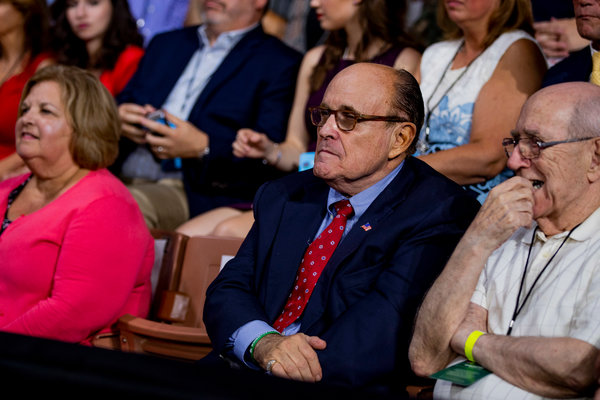 Then, in late August, the Ukrainians learned that a package of American military assistance was being delayed by the White House, because, Vice President Mike Pence later explained after a meeting with Mr. Zelensky, he and Mr. Trump “have great concerns about issues of corruption.”

That sequence of events is now at the heart of a clash between congressional Democrats and the White House over whether Mr. Trump used the powers of his office and United States foreign policy in an effort to seek damaging information about a political rival. The conflict has been fueled in recent days by the administration’s refusal to allow the intelligence community inspector general to disclose to Congress any information about the complaint.

The dispute has further stoked calls among House Democrats to advance impeachment proceedings against the president. Mr. Trump’s open backing for a Ukrainian investigation into the Bidens — “Somebody ought to look into that,” he told reporters in the Oval Office on Friday — is especially striking for coming soon after the special counsel’s lengthy investigation into whether Mr. Trump encouraged or accepted help from Russia in the 2016 campaign.

The situation has also highlighted Mr. Trump’s grudge against Ukraine, a close ally that has long enjoyed bipartisan support as it seeks to build a stable democracy and hold off aggression from its hostile neighbor to the east, Russia.

Mr. Trump has often struck a less-than-condemnatory tone toward Russian aggression, including its interference on his behalf in the 2016 presidential election, and its 2014 annexation of Crimea from Ukraine, which Mr. Trump said last month should no longer prevent Russia from rejoining the Group of 7 industrialized nations.

Only after Congress put intense bipartisan pressure on the administration did he release the military assistance package to Ukraine last week.

After delays in scheduling a White House meeting for Mr. Zelensky, and the cancellation of a trip by Mr. Trump to Europe during which the two would have met in person for the first time, a meeting was finally added to Mr. Trump’s calendar for Wednesday in New York, on the sidelines of the United Nations General Assembly.

Privately, Mr. Trump has had harsh words about Ukraine, a former Soviet state. He has been dismissive of his own administration’s recommendations that he throw the full support of the United States government to Mr. Zelensky, a former comedian and political neophyte who is seen in the West as a reformer elected with a mandate to stop both Russian aggression and the political corruption that has long plagued the country.

In May, a delegation of United States officials returned from Mr. Zelensky’s inauguration praising the new president and urging Mr. Trump to meet with him, arguing that Mr. Zelensky faced enormous headwinds and needed American support. The future of Ukraine, they said during an Oval Office meeting with Mr. Trump, would be decided in the next six months.

Mr. Trump was not sympathetic. “They’re terrible people,” he said of Ukrainian politicians, according to people familiar with the meeting. “They’re all corrupt and they tried to take me down.”

Mr. Trump’s campaign chairman, Paul Manafort, was forced to resign after anti-corruption prosecutors in Ukraine disclosed records showing that a Russia-aligned political party had earmarked payments for him from an illegal slush fund.

Mr. Giuliani has claimed without evidence that the records were doctored, and one of the matters into which he has sought an investigation is the records’ provenance and release.

He contends that the circumstances around the records’ release could undermine the legitimacy of the special counsel’s investigation.

As far back as the summer of 2017, Mr. Trump posted on Twitter about “Ukrainian efforts to sabotage Trump campaign” and bolster Mrs. Clinton’s, demanding, “So where is the investigation.”

The other matter involves the overlap between Mr. Biden’s diplomacy in Ukraine and his son’s involvement in a gas company owned by a Ukrainian oligarch.

Mr. Biden is a leading contender for the 2020 Democratic presidential nomination, and Mr. Giuliani has acknowledged that such an investigation could damage him.

Mr. Trump has called attention to the scrutiny of Hunter Biden, and to questions about the former vice president’s involvement in the removal of a Ukrainian prosecutor whose office had authority over investigations of the oligarch whose company paid Hunter Biden.

The former vice president’s support for the removal of the Ukrainian prosecutor was consistent with the administration’s policy and the anticorruption goals of the Western allies. But State Department officials at the time were concerned that Hunter Biden’s work for the gas company could complicate his father’s diplomacy in Ukraine.

The president has suggested he would like Attorney General William P. Barr to look into any material gathered by the Ukrainian prosecutors on the matters.

Starting almost a year ago, Mr. Giuliani, a former federal prosecutor and New York mayor, enlisted intermediaries in a monthslong effort to build interest in the Ukrainian inquiries. They worked with prosecutors under the former Ukrainian government to gather information about the investigations.

After the planned trip prompted a backlash from Democrats accusing him of trying to enlist foreign assistance to help Mr. Trump’s re-election, Mr. Giuliani canceled the trip at the last minute. He accused Mr. Zelensky’s allies of planning a “setup.”

Mr. Zelensky’s transition team, not wanting to be seen as taking sides in United States politics, rebuffed a request from Mr. Giuliani for a meeting with the new president, a former adviser to Mr. Zelensky, Serhiy Leshchenko, said in an interview.

“It was clear that the Zelensky team doesn’t want to interfere in American politics,” Mr. Leshchenko said. “They were very angry about this issue.”

Mr. Leshchenko and two other Ukrainians — all of them young, Western-leaning politicians and veterans of the 2014 revolution — said in interviews that Mr. Giuliani’s efforts created the impression that the Trump administration’s willingness to back Mr. Zelensky was linked to his government’s readiness to pursue the investigations sought by Mr. Trump’s allies.

When it became clear that he would not be granted an audience with the incoming Ukrainian president, Mr. Giuliani asserted in an interview on Fox News that Mr. Zelensky was being advised by “people who are the enemies” of Mr. Trump, including Mr. Leshchenko.

Mr. Giuliani seemed to be referring to Mr. Leshchenko’s role in helping to draw attention to reports about the “black ledger” book that detailed $12.7 million in off-the-books payments to Mr. Manafort, who did extensive work in Ukraine for Viktor F. Yanukovych, the disgraced former president.