WASHINGTON — It was solemn, dignified and brief — the antithesis of the prolonged, bitter, circuslike spectacle that preceded it. Yet when the Supreme Court formally welcomed Brett M. Kavanaugh as an associate justice on Thursday, there were still echoes of the rancor his nomination to the court ignited.

Justice Kavanaugh skipped the most public element of the ceremony, a traditional walk down the court’s front steps with Chief Justice John G. Roberts Jr., “out of an abundance of caution, due to security concerns,” according to a spokeswoman for the court, Kathleen Arberg.

Inside the majestic chamber, where members of Washington’s Republican establishment mingled amid the marble columns before the investiture began, there were reminders not just of the contentious confirmation process but also of the turmoil on the Trump legal team, which deepened this week after President Trump fired Attorney General Jeff Sessions.

Around Justice Kavanaugh was a vivid tableau of Mr. Trump’s Washington, a city rived by the battle over the Supreme Court and shadowed by questions about the rule of law. For about 15 minutes, many of the key players were gathered in the same room.

There was Mr. Trump, who used the partisan warfare over the Kavanaugh nomination to galvanize supporters during the midterm campaign and claimed afterward that it helped cement a Republican majority in the Senate.

There were Justice Kavanaugh’s wife, Ashley, and his parents, Everett and Martha, who had sat behind him in a Senate hearing room when he furiously defended himself against allegations that he sexually assaulted Christine Blasey Ford when the two were in high school.

There was Merrick B. Garland, the chief justice of the United States Court of Appeals for the District of Columbia Circuit, whose own nomination to the court was blocked by Republicans, leaving a legacy of Democratic grievance that shadowed Justice Kavanaugh’s path.

Missing was Justice Ruth Bader Ginsburg — who fractured three ribs in a fall in her office on Wednesday and was being treated at George Washington University Hospital — her empty chair a conspicuous reminder that the court’s liberal wing is a fragile, dwindling minority.

The ceremony itself was a formality: Justice Kavanaugh, 53, was sworn in last month and has already taken part in his first arguments on the bench. But the investiture amounted to one last victory lap for several of the major combatants in the confirmation battle.

Senator Lindsey Graham, the South Carolina Republican who delivered a stem-winding defense of the justice at his hearing, was on hand. So was the Republican leader, Senator Mitch McConnell of Kentucky, who maneuvered the nomination through the Senate, and Donald F. McGahn II, the recently departed White House counsel who championed him from the start.

The proceedings also captured the turmoil of the Trump administration a day after the president fired Mr. Sessions and rekindled fears about the future of the Justice Department’s investigation of Mr. Trump’s ties to Russia.

With Mr. Sessions abruptly cashiered, the acting attorney general, Matthew G. Whitaker, represented the Justice Department. He was joined by the deputy attorney general, Rod J. Rosenstein, whom he had just replaced as the supervisor of the special counsel, Robert S. Mueller III. 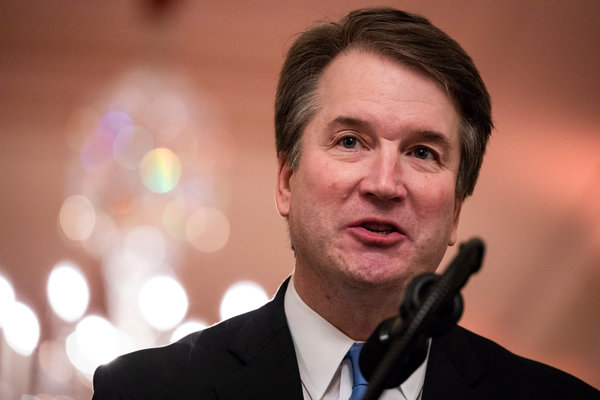 The clerk, Scott Harris, read out the commission from parchment, its flowery language granting Justice Kavanaugh the privileges of a justice “during his good behavior.” It was signed by Donald J. Trump and Jefferson B. Sessions.

Justice Kavanaugh, who faced his seven colleagues from a chair once used by Chief Justice John Marshall, then mounted a few steps to the bench, where Chief Justice Roberts administered the judicial oath.

Justice Kavanaugh stood next to Justice Ginsburg’s vacant chair, his right hand in the air, speaking in a voice now familiar from his televised hearing. Afterward, he walked to the far side of the bench, taking a seat reserved for the most junior justice, next to Justice Elena Kagan.

Mr. Trump and the first lady, Melania Trump, smiled and applauded, and the president chatted and laughed with those seated around him.

The president did not speak in the court. But on Wednesday, he made clear how beneficial he believed the battle over Justice Kavanaugh had been for the midterms, particularly in the Senate, where Republicans expanded their majority.

The voters, he said at a news conference, “clearly rebuked the Senate Democrats for their handling of the Kavanaugh hearings.”

“That was a factor,” he continued. “I think maybe a very big factor. The way that was handled, I think, was — tremendous energy was given to the Republican Party by the way they treated then-Judge Kavanaugh, now Justice Kavanaugh.”

During the final days of the campaign, Mr. Trump exploited the passions generated by the confirmation hearings — even claiming, misleadingly, that “the accuser of Brett Kavanaugh” had recanted her allegations. “It was all a fake,” he said at a rally in Cape Girardeau, Mo.

Dr. Blasey never recanted her allegations that Justice Kavanaugh assaulted her in a Maryland bedroom when they were teenagers. Mr. Trump was apparently referring to another accuser, Judy Munro-Leighton, whose allegations never played a major part in the dispute over Justice Kavanaugh. But the president’s misdirection was deliberate — and, analysts said, effective.

Justice Kavanaugh had plenty of supporters in attendance, including a visible contingent from the George W. Bush administration, where he served as staff secretary. Alberto R. Gonzales, an attorney general under Mr. Bush, worked the room before the ceremony started. Nearby was Harriet Miers, whose nomination to the court was withdrawn under intense opposition in Congress.

Also on hand were former clerks of Justice Kavanaugh, some of whom had risen to his defense when Dr. Blasey accused him of assault, and members of the District of Columbia Circuit, where he served for 12 years before Mr. Trump nominated him to the Supreme Court.

Leonard A. Leo, an influential lawyer who helped steer Justice Kavanaugh’s selection through his right-wing legal organization, the Federalist Society, watched from one of the front rows.

Mr. Rosenstein — who last year had presented Neil M. Gorsuch, Mr. Trump’s first nominee to the court — played a less formal role this time around. Looking relaxed and wearing a broad smile a day after he yielded responsibility for the Mueller investigation, Mr. Rosenstein walked over to shake hands with Justice Kavanaugh’s parents.