Home » Middle East » Who are the Kurds?

Who are the Kurds? 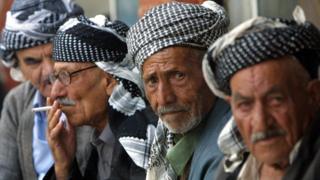 Between 25 and 35 million Kurds inhabit a mountainous region straddling the borders of Turkey, Iraq, Syria, Iran and Armenia. They make up the fourth-largest ethnic group in the Middle East, but they have never obtained a permanent nation state.

Where do they come from?

The Kurds are one of the indigenous peoples of the Mesopotamian plains and the highlands in what are now south-eastern Turkey, north-eastern Syria, northern Iraq, north-western Iran and south-western Armenia.

Today, they form a distinctive community, united through race, culture and language, even though they have no standard dialect. They also adhere to a number of different religions and creeds, although the majority are Sunni Muslims.

Kurdistan: A State of Uncertainty

Why don’t they have a state?

In the early 20th Century, many Kurds began to consider the creation of a homeland – generally referred to as “Kurdistan”. After World War One and the defeat of the Ottoman Empire, the victorious Western allies made provision for a Kurdish state in the 1920 Treaty of Sevres.

Such hopes were dashed three years later, however, when the Treaty of Lausanne, which set the boundaries of modern Turkey, made no provision for a Kurdish state and left Kurds with minority status in their respective countries. Over the next 80 years, any move by Kurds to set up an independent state was brutally quashed.

Aiming to change the outcome of World War One

Why are Kurds at the forefront of the fight against IS?

In mid-2013, the jihadist group Islamic State (IS) turned its sights on three Kurdish enclaves that bordered territory under its control in northern Syria. It launched repeated attacks that until mid-2014 were repelled by the People’s Protection Units (YPG) – the armed wing of the Syrian Kurdish Democratic Union Party (PYD).

An IS advance in northern Iraq in June 2014 also drew that country’s Kurds into the conflict. The government of Iraq’s autonomous Kurdistan Region sent its Peshmerga forces to areas abandoned by the Iraqi army.

In August 2014, the jihadists launched a surprise offensive and the Peshmerga withdrew from several areas. A number of towns inhabited by religious minorities fell, notably Sinjar, where IS militants killed or captured thousands of Yazidis.

In response, a US-led multinational coalition launched air strikes in northern Iraq and sent military advisers to help the Peshmerga. The YPG and the Kurdistan Workers’ Party (PKK), which has fought for Kurdish autonomy in Turkey for three decades and has bases in Iraq, also came to their aid.

In September 2014, IS launched an assault on the enclave around the northern Syrian Kurdish town of Kobane, forcing tens of thousands of people to flee across the nearby Turkish border. Despite the proximity of the fighting, Turkey refused to attack IS positions or allow Turkish Kurds to cross to defend it.

In January 2015, after a battle that left at least 1,600 people dead and more than 3,200 buildings destroyed or damaged, Kurdish forces regained control of Kobane.

Since then, the Kurds – fighting under the banner of the Syrian Democratic Forces (SDF) alongside several local Arab militias, and helped by US-led coalition airpower – have driven IS out thousands of square kilometres of territory in Syria and established control over hundreds of kilometres along the border with Turkey.

In October 2017, SDF fighters captured the de facto IS capital of Raqqa and were advancing south-eastwards into the neighbouring province of Deir al-Zour – the jihadists’ last major foothold in Syria.

The gains have, however, brought the Kurds and their allies into direct contact with Russian-supported Syrian government forces and Turkish-backed rebels, triggering clashes that have raised tensions between competing world powers.

What has Kobane battle taught us?

Raqqa: The city fit for no-one

Why is Turkey reluctant to help the Kurds battle IS?

There is deep-seated hostility between the Turkish state and the country’s Kurds, who constitute 15% to 20% of the population.

Kurds received harsh treatment at the hands of the Turkish authorities for generations. In response to uprisings in the 1920s and 1930s, many Kurds were resettled, Kurdish names and costumes were banned, the use of the Kurdish language was restricted, and even the existence of a Kurdish ethnic identity was denied, with people designated “Mountain Turks”.

In 1978, Abdullah Ocalan established the PKK, which called for an independent state within Turkey. Six years later, the group began an armed struggle. Since then, more than 40,000 people have been killed and hundreds of thousands displaced.

In the 1990s the PKK rolled back on its demand for independence, calling instead for greater cultural and political autonomy, but continued to fight. In 2013, a ceasefire was agreed after secret talks were held.

The ceasefire collapsed in July 2015, after a suicide bombing blamed on IS killed 33 young activists in the mainly Kurdish town of Suruc, near the Syrian border. The PKK accused the authorities of complicity and attacked Turkish soldiers and police. The Turkish government subsequently launched what it called a “synchronised war on terror” against the PKK and IS.

Since then, several thousand people – including hundreds of civilians – have been killed in clashes in south-eastern Turkey.

In August 2016, Turkey sent troops and tanks into northern Syria to support a Syrian rebel offensive against IS. Those forces captured the key border town of Jarablus and the IS stronghold of al-Bab, preventing the YPG-led SDF from seizing the territory itself and linking up with the Kurdish enclave of Afrin to the west.

Turkey’s government says the YPG and the PYD are extensions of the PKK, share its goal of secession through armed struggle, and are all terrorist organisations.

What do Syria’s Kurds want?

Kurds make up between 7% and 10% of Syria’s population. Before the uprising against President Bashar al-Assad began in 2011 most lived in the cities of Damascus and Aleppo, and in three, non-contiguous areas around Kobane, Afrin, and the north-eastern city of Qamishli.

Syria’s Kurds have long been suppressed and denied basic rights. Some 300,000 have been denied citizenship since the 1960s, and Kurdish land has been confiscated and redistributed to Arabs in an attempt to “Arabize” Kurdish regions.

When the uprising evolved into a civil war, the main Kurdish parties publicly avoided taking sides. In mid-2012, government forces withdrew to concentrate on fighting the rebels elsewhere, and Kurdish groups took control in their wake.

In January 2014, Kurdish parties – including the dominant Democratic Union Party (PYD) – declared the creation of “autonomous administrations” in the three “cantons” of Afrin, Kobane and Jazira.

In March 2016, they announced the establishment of a “federal system” that included mainly Arab and Turkmen areas captured from IS.

The declaration was rejected by the Syrian government, the Syrian opposition, Turkey and the US.

The PYD says it is not seeking independence, but insists that any political settlement to end the conflict in Syria must include legal guarantees for Kurdish rights and recognition of Kurdish autonomy.

President Assad has vowed to take back control of all of Syria, but his foreign minister said in September 2017 that he was open to negotiations with Kurds over their demand for autonomy.

Kurds make up an estimated 15% to 20% of Iraq’s population. They have historically enjoyed more national rights than Kurds living in neighbouring states, but also faced brutal repression.

In 1946, Mustafa Barzani formed the Kurdistan Democratic Party (KDP) to fight for autonomy in Iraq. But it was not until 1961 that he launched a full armed struggle.

In the late 1970s, the government began settling Arabs in areas with Kurdish majorities, particularly around the oil-rich city of Kirkuk, and forcibly relocating Kurds.

The policy was accelerated in the 1980s during the Iran-Iraq War, in which the Kurds backed the Islamic republic. In 1988, Saddam Hussein unleashed a campaign of vengeance on the Kurds that included the chemical attack on Halabja.

When Iraq was defeated in the 1991 Gulf War, Barzani’s son Massoud and Jalal Talabani of the rival Patriotic Union of Kurdistan (PUK) led a Kurdish rebellion. Its violent suppression prompted the US and its allies to impose a no-fly zone in the north that allowed Kurds to enjoy self-rule. The KDP and PUK agreed to share power, but tensions rose and a four-year war erupted between them in 1994.

The parties co-operated with the US-led invasion in 2003 that toppled Saddam and governed in coalition in the Kurdistan Regional Government (KRG), created two years later to administer Dohuk, Irbil and Sulaimaniya provinces.

In September 2017, a referendum on independence was held in both the Kurdistan Region and the disputed areas seized by the Peshmerga in 2014, including Kirkuk. The vote was opposed by the Iraqi central government, which insisted it was illegal.

More than 90% of the 3.3 million people who voted supported secession. KRG officials said the result gave them a mandate to start negotiations with Baghdad, but Iraqi Prime Minister Haider al-Abadi demanded that it be annulled.

The following month Iraqi pro-government forces retook the disputed territory held by the Kurds. The loss of Kirkuk and its oil revenue was a major blow to Kurdish aspirations for their own state.