Delegates from the rivals, LNA troops and GNA fighters, will conduct truce talks on video calls because of coronavirus. 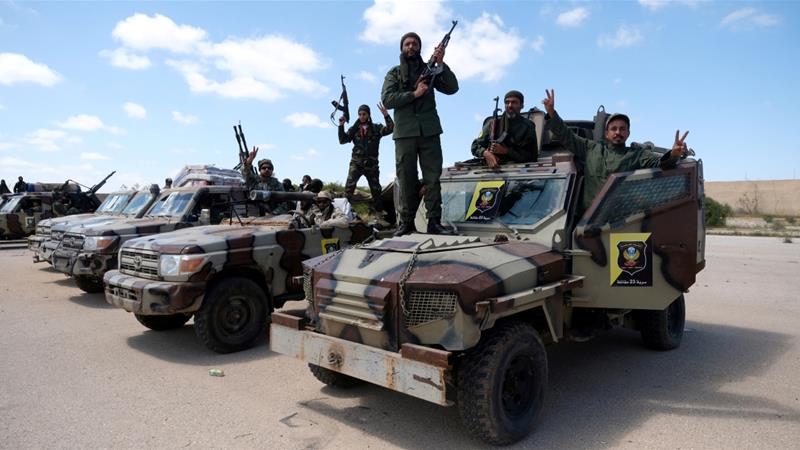 The United Nations has said that Libya’s warring factions agreed to resume ceasefire talks following days of heavy fighting and eastern-based forces retaking a key town from their rivals after a string of setbacks.

The UN Mission in Libya said it hoped the new round of negotiations would “mark the beginning of calm on the ground”, especially to allow the country’s war-scarred health system to cope with a coronavirus outbreak.

Delegates from the rival groups – renegade commander Khalifa Haftar’s eastern-based forces and militias allied with the UN-recognised government in Tripoli – will conduct the talks through video calls because of the pandemic, the UN Mission said in the announcement late Monday.

It did not say when discussions would resume or give further details.

Back from the brink

As the war in Libya teeters on the edge of a major escalation, the statement signalled that both sides, and their foreign backers, may prefer to pull back from the brink.

Haftar is backed by the United Arab Emirates, Egypt and Russia, while the Tripoli-allied militias are aided by Turkey, Qatar and Italy.

Spokespeople for the military factions did not immediately respond to requests for comment, and the fate of the political process remains unclear after previous agreements collapsed.

On Sunday, Haftar’s self-styled Libyan National Army (LNA) recaptured the strategic town of al-Asaba, about 50km (31 miles) south of the capital, after launching air attacks on militias in the area, according to Ahmed al-Mesmari, a spokesman for the group. Troops were chasing Tripoli-allied forces to their stronghold in the nearby town of Gharyan, he added.

A statement from the Tripoli-allied forces did not acknowledge the defeat, spokesman Mohamed Gnono saying only they were targeting LNA forces on the town’s borders. But two Tripoli officials, speaking on condition of anonymity because they were not authorised to brief reporters, admitted they lost the town after heavy shelling and air attacks by eastern forces.

Control of the town gives the LNA better access to Tarhouna, their main western stronghold and supply line southeast of the capital.

Haftar’s gain more broadly reflects the seesawing nature of the war, which in recent weeks had turned dramatically in favour of the Turkish-backed Tripoli militias that ousted Haftar’s forces from a key western airbase and several towns. The Tripoli government had been struggling to fend off a year-long siege of the capital by Haftar when Turkey escalated its air support.

The battle for Tripoli has threatened to plunge Libya into chaos on the scale of the 2011 uprising that toppled and killed longtime dictator Muammar Gaddafi, as foreign backers increasingly intervene.

Last month, in an unusually bold statement, the US military accused Russia of deploying 14 aircraft to Libya to help Haftar’s forces, saying the move was part of Moscow’s longer-term goal to establish a foothold in the region that could threaten NATO allies.

Russia dismissed the claims as “stupidity”.

Hello You: Israeli-UAE joint song a YouTube hit amid normalisation of ties