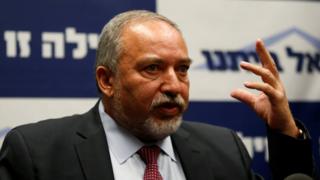 Avigdor Lieberman, leader of the right-wing Yisrael Beiteinu party, is one of Israel’s most popular and controversial politicians.

In May 2016, Mr Lieberman was appointed defence minister by Prime Minister Benjamin Netanyahu after he agreed to join the governing coalition.

The deal was enough to prompt Moshe Yaalon, a senior member of Mr Netanyahu’s Likud party and former military chief, to resign as defence minister in protest.

Mr Yaalon warned that the government was being taken over by “extremist and dangerous elements”.

Mr Lieberman was born in 1958 in Kishinev in the USSR, now Chisinau in Moldova, and emigrated to Israel at the age of 20 under the Law of Return.

He became active in student politics in Israel and began his career working for Likud, serving as the party’s director-general between 1993 and 1996, followed by a year as head of Mr Netanyahu’s office during his first term as prime minister.

He then left Likud and founded his own party, Yisrael Beiteinu (Israel Our Home), which became popular among the one million Russian-speaking Jews who came to Israel following the collapse of the Soviet Union.

In its first election in 1999, the party won four seats in Israel’s parliament, the Knesset.

But in 2004, he was sacked after opposing then Prime Minister Ariel Sharon’s plan to withdraw from the Gaza Strip, which went ahead in 2005.

Mr Lieberman became a major player in Israeli politics in 2006, when his party won 11 seats.

This paved the way for him to become deputy prime minister and minister of strategic affairs under Ehud Olmert’s coalition, which was led by the Kadima party.

In the 2009 elections, Mr Lieberman led Yisrael Beiteinu to third place. With 15 seats under his control he became “kingmaker”.

He blocked efforts by the largest party, Kadima, to form a coalition government and instead declared his support for Likud. In return, Mr Lieberman was given the powerful post of foreign minister by Mr Netanyahu.

He angered Israeli Arabs by campaigning in 2009 for an oath of allegiance to be a requirement for non-Jews taking Israeli citizenship. He wanted them to swear loyalty to Israel as a Jewish, democratic state, to accept its symbols, flag and anthem, and to commit to military service.

Although Mr Lieberman favours a “two-state solution” with the Palestinians, he has also controversially advocated trading parts of Israel that are predominantly Arab in exchange for the land on which major settlement blocs are built in the West Bank.

Though the Palestinians have said they would accept land swaps, his proposal would significantly reduce the number of Arabs who are Israeli citizens.

Mr Lieberman has also advocated assassinating the leaders of the Palestinian Islamist movement, Hamas, which dominates Gaza, and said he would support the death penalty for Arab members of the Knesset who met leaders of Hamas or Lebanon’s Hezbollah, which Israel has designated as terrorist groups.

Mr Lieberman has also been dogged by corruption allegations.

A month before the January 2013 elections, which were narrowly won by a Yisrael Beitenu-Likud joint list, Mr Lieberman was charged with breach of trust.

He was accused of promoting Israel’s former ambassador to Belarus, Zeev Ben Aryeh, to another post after the diplomat gave him confidential information regarding an Israeli police probe into his activities.

Mr Lieberman resumed his duties as foreign minister and served in the post until May 2015.

That month he shocked the political establishment by announcing he would not join the governing coalition of right-wing and religious parties being formed by Mr Netanyahu following Likud’s unexpectedly strong performance in elections that March.

Mr Lieberman said he and his party had chosen principles over ministerial portfolios, accusing the coalition of being “opportunist” and not “nationalist”.

Without Yisrael Beitenu’s six seats, the prime minister was left with a one-seat majority in parliament, which made it difficult to pass major new legislation.

A year later, Mr Netanyahu succeeded in persuading Mr Lieberman to join the coalition by offering him post of defence minister.

Mr Lieberman promised he would be committed to “responsible, reasonable policy”.

But former Defence Minister Moshe Arens called the appointment a “mistake”, and a senior Palestinian official said it brought a real threat to regional stability.