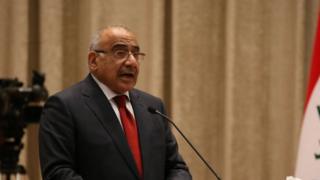 Last month he opened up the recruitment of ministers to the public by setting up an online portal for applications.

Prospective ministers were invited to attach a CV and evidence that they meet the requirements. The names of those chosen are yet to be announced.

Mr Mahdi was asked to form a new government in October, ending months of deadlock after inconclusive elections.

The unusual recruitment process for five of 14 cabinet posts was first announced on Facebook by the prime minister.

Hopefuls were told to state whether they belong to any political party, and which ministry they would like to lead.

They were also asked to describe projects they had overseen, outline their thoughts on what makes a successful leader and how they would tackle the problems their ministry is facing.

Part of the prime minister’s role is to oversee the reconstruction of Iraq following the four-year battle against the jihadist group Islamic State (IS), which left tens of thousands of homes and business destroyed and displaced more than three million people.