Houthi chief vows to 'not surrender' as rebels lose ground

Abdel-Malik al-Houthi said he will not surrender as pro-government forces advance towards a key port city. 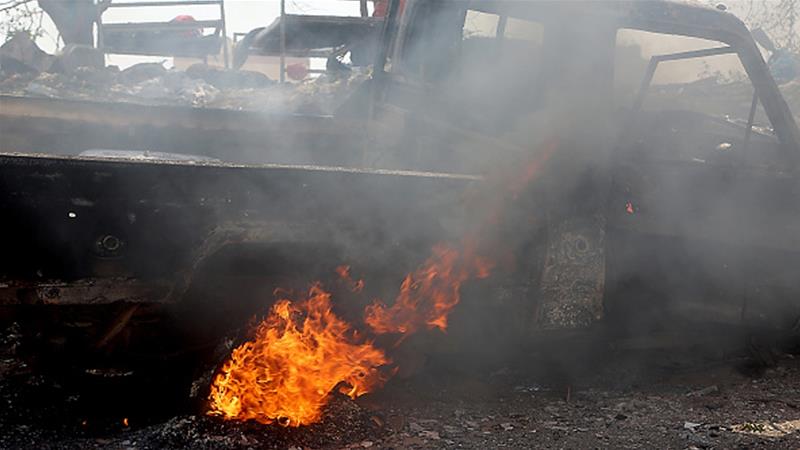 The chief of Houthi rebels in Yemen has said he will “never surrender” to Saudi-backed pro-government forces as a fierce battle for control of a key port city deepens the humanitarian crisis.

“This is not happening and will not happen ever,” he said, according to AFP news agency.

Hodeidah is a strategic port for humanitarian aid and is the entry point for over 70 percent of imports into Yemen, the poorest country in the Arab world.

Nearly 200 fighters have been killed in the fierce battle on the outskirts of rebel-held Hodeidah since last week, including at least 27 Houthi rebels and 12 pro-government fighters in the past 24 hours.

The Houthi rebels appeared to acknowledge they have lost ground in the battle for Hodeidah and accused pro-government forces of provoking an escalation in violence.

“The enemy benefits from its numbers, which it has increased even further to pressure the city of Hodeidah,” said the chief of the Houthi rebels.

His statement came shortly after Saudi-backed forces said they have pounded rebel positions with an air attack and a ground assault, and now control a major road leading to the port city.

Yemeni military officials and witnesses on both sides of the Hodeidah front line on Wednesday said the alliance secured an urban area along 50th Street, which leads to the Red Sea port about 5km away.

The clashes came as the United Nations pushed to restart negotiations between the warring parties, after the September talks in Geneva collapsed before they even began.

Last week, UN Secretary-General Antonio Guterres demanded an “immediate” halt to the fighting, warning that the country stands on a “precipice” and could face the world’s “worst famine” for decades if violence continues unabated.

The conflict in Yemen began with the 2014 takeover of the capital, Sanaa, by the Houthis, who toppled the internationally recognised government of President Abd-Rabbu Mansour Hadi.

The coalition forces – which include Saudi Arabia and the United Arab Emirates and are backed by the United States – intervened in 2015 to reinstall Hadi’s government.

In June, the coalition launched a new offensive to retake Hodeidah, held by the Houthis since 2014.

Yemen is now home to the world’s worst humanitarian crisis, which has killed at least 10,000 people since 2015, according to the UN.

The death toll, however, has not been updated in years and is likely to be much higher.

The Armed Conflict Location and Event Data Project, an independent watchdog, recently said around 56,000 Yemenis had been killed in the violence.

On Tuesday, UNICEF said the battle for Hodeidah placed the “lives of 59 children, including 25 in the intensive care unit, at imminent risk of death”.

The International Committee of the Red Cross on Wednesday appealed for warring parties to “spare civilians and civilian infrastructure” including ambulances, hospitals, electricity and water plants.