The reforms will be put to a referendum on the anniversary of the start of Algeria’s war of independence from France. 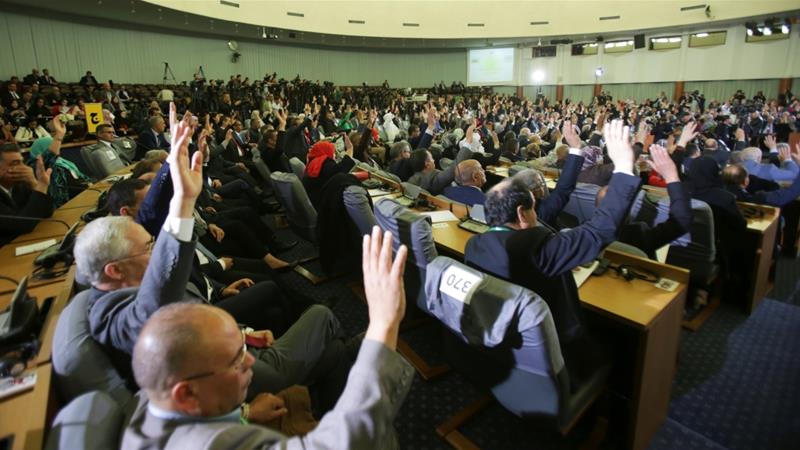 Algeria’s parliament has adopted draft constitutional reforms, an initiative of President Abdelmadjid Tebboune aimed at responding to the demands of the country’s “Hirak” protest movement.

By a show of hands on Thursday, the amended constitution was approved by 256 of the 462 members present in the People’s National Assembly, said speaker Slimane Chenine.

The reforms will now be put to a referendum on November 1, the anniversary of the start of Algeria’s 1954-1962 war of independence from France.

“The proposal is fully in line with the requirements of modern state building and responds to the demands of the popular movement [Hirak],” Tebboune said on Sunday after the government gave the reforms the greenlight.

The government promised the reforms would bring a “radical change in the system of governance”, prevent corruption and enshrine social justice and press freedoms in the constitution.

The revision also sets out to reinforce the “principle of separation of powers, ethics in political life and transparency in the management of public funds”, so as to “spare the country any drift toward tyrannical despotism”, it added.

Tebboune had promised to press for reforms during elections held late last year.

The polls were held following the resignation of longtime leader Abdelaziz Bouteflika under pressure from the Hirak movement, which widely rebuffed the polls.

Algeria’s constitution has been modified several times since independence and was tailored to Bouteflika, who gained unlimited powers of appointment for top official positions.

Since Bouteflika’s resignation last April, the judiciary has handed down heavy prison sentences to former officials and influential businessmen once close to him, mostly on charges of corruption or nepotism.

But since the weekly Hirak protests were halted in March due to the coronavirus pandemic, political opponents, independent media and activists have also been targets of a crackdown.

The revised constitution has already been criticised by jurists and rejected by a group of parties and associations linked to Hirak, which has slammed it as a “laboratory constitution” and described the referendum as “treachery”.