NAPLES, Fla. — Most people from the Northeast move to Florida to get out of the cold. Colleen Gill came to Naples because she heard the call of the wild.

She had vacationed on this slice of coastal paradise for 20 years. She made regular jaunts to the Big Cypress National Preserve, home to cypress swamps and wild panthers. She kayaked in the Gulf. With each visit, she fell more in love.

Ms. Gill and her husband own a hemp footwear company that they can manage from anywhere. So they sold their house in New Hampshire three years ago and headed down for good.

Ms. Gill, 38, coveted her regular long walks on the white-sand beaches. By last summer, the walks had turned gruesome. Increasingly, there would be eels, tarpon and sea turtles dead or dying along the tide line.

Federal officials pointed to a red tide algae bloom as the culprit. Its toxins deplete seawater of oxygen and kill the sea creatures that ingest it.

Red tide has killed wildlife along the Gulf Coast for centuries. But the latest bloom has been unusually persistent. It arrived over a year ago, and its effects have been extreme.

Ms. Gill and others here argued that human activity had contributed to the stubborn bloom. She joined the debate on Facebook, making the case that the combined effects of sugar plantations, fertilizer runoff and warming seas were sustaining the microscopic Karenia brevis algae species and making it more lethal.

Many scientists agree with that assessment, arguing that human-based nutrients and climate change are at least exacerbating the red tide and other algae blooms.

But Florida is run by a governor, Rick Scott, whose environmental officials had discouraged the use of the phrase “climate change.” And this part of the state is Trump country, not to mention a vacation enclave for conservative media stars like Sean Hannity and Neal Boortz, who doubt the scientific consensus on the human contributions to climate change. 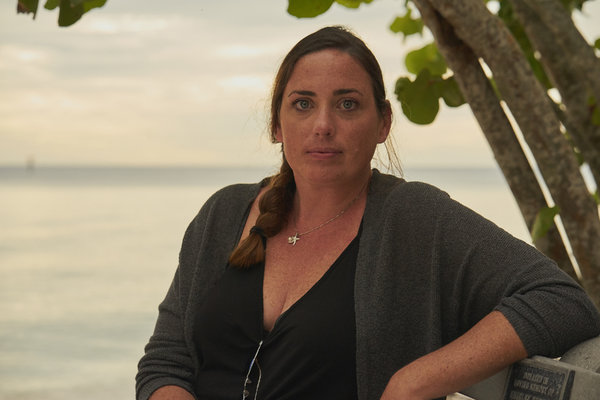 On community Facebook pages, neighbors accused Ms. Gill and others of getting worked up over nothing. The algae bloom was nature running its course, they said.

Irked by the debate and concerned that the news media wasn’t doing enough to cover what she was seeing on the beach, Ms. Gill, whose father was a producer for CBS News, started shooting videos with her iPhone during her morning walks.

On Nov. 26, one of her videos went so viral that it drew the notice of The Naples Daily News and local news stations.

In the video, Ms. Gill zoomed in on a six-foot-long, stiff, glistening dolphin carcass, its mouth frozen into a toothy smile. The creature was one of more than 20 dead bottlenose dolphins that had washed up on local beaches in recent days.

“This is the seventh one in 24 hours,” Ms. Gill said through tears in the video. “When is this going to stop?”

At roughly the same time, in Washington, President Trump told reporters outside the White House that he had doubts about the climate change report his administration had released the day after Thanksgiving.

The administration had made the report public without any effort to soften its conclusions, as the administration of George W. Bush had done with similar reports. Under President Trump, it seemed no longer necessary to spin the particulars, Coral Davenport reported for The New York Times. The administration had hit upon a new tactic that drew from lessons that Mr. Trump had learned on the campaign trail: All you have to do these days to combat facts is to declare them false. Disdain is stronger than spin.

As Steven J. Milloy, a skeptic of human-caused climate change and a member of the Trump transition team, said, there had been no need “to stop the deep state” from releasing the report when “this is made-up hysteria, anyway.”

Thankfully, cable news came to the rescue by making sure that those who commented on air about a report produced by scientists across 13 federal agencies were trained experts.

No, wait. That’s not what happened.

On CNN, the former senator Rick Santorum disputed the findings with a canard: “A lot of these scientists are driven by the money that they receive,” he said. The network later came under fire when “AC360” had Mr. Santorum on again but canceled a planned interview with an author of the government report, the atmospheric scientist Katharine Hayhoe of Texas Tech University.

On NBC’s “Meet the Press,” Danielle Pletka of the American Enterprise Institute attacked the climate change report by falsely stating, “We need to also recognize that we just had two of the coldest years, the biggest drop in global temperatures, that we’ve had since the 1980s,” although 2016 and 2017 were among the warmest years on record.

My depressing Florida journey took me from the deadly beach in Naples to the other side of the state, where I met with Benjamin Kirtman, the director of the Cooperative Institute for Marine and Atmospheric Studies at the University of Miami.

He suggested that television news bookers change their approach if they want to accurately reflect the debate.

“You have 97 percent of climate scientists who understand the science and know what the reality is, and then you find a podiatrist from Yahupitz who’s going to tell you not to worry,” he said. “It’s a false equivalence.”

We were in his office on Virginia Key, in Miami. If human causes of climate change go unmitigated, he said, the Biscayne Bay will overcome the road here at high tide half the days of the year by 2100. Last year Miamians voted to spend some $200 million on sea walls and pumps and drains to mitigate the effects of the rising sea.

Yet despite that literal, concrete evidence, Professor Kirtman told me that a third of those he talks to about the data behind human-influenced climate change just don’t buy it. So he has stopped trying to persuade that part of the population.

“They’re going to have to find out for themselves,” he said, “when they can’t sell their house.”

I hadn’t heard that kind of pessimism from Mr. Kirtman when I met him four years ago while covering the governor’s race. I wondered whether Facebook hadn’t contributed to hardening positions, with increasing talk of the “deep state” providing denialists with a fresh line of attack.

That sort of conspiracy-mongering was part of why Ms. Gill said she had decided to post videos of the red tide carnage in Naples.

She knew that in the “fake news” era doubters could accuse her of doctoring evidence, so she came up with a solution: “I decided to do it on Facebook Live, so people couldn’t be like, ‘You made that up,’” she told me.

Still, not everyone was convinced by her posts, which have at times been met by ridicule, vitriol and ugly name-calling.

On the other hand, as the arrival of television news crews suggested, she seemed to be breaking through.

By the end of my time with Ms. Gill, the National Oceanic and Atmospheric Administration declared that 42 dolphins had died in the previous 10 days. And a new emergency was breaking out. Sea birds — including sandwich terns and common terns — were dropping out of the sky, dying by the hundreds.

Veterinarians at the von Arx Wildlife Hospital of the Conservancy of Southwest Florida were deluged. The director, Joanne Fitzgerald, told me they weren’t ready to blame red tide. Working in the reality business, they were awaiting lab results. But she added that she had never seen anything like it in 25 years.

“I don’t understand the denial when there is proof of something like this affecting the animals,” Ms. Fitzgerald said. “I mean, you can’t keep denying it.”

After a pause, she added, “I mean, obviously, you can. Because people are.”