Good Monday morning. (Was this email forwarded to you? Sign up here.)

Masayoshi Son, SoftBank’s C.E.O., finally spoke out today against the killing of the Saudi dissident Jamal Khashoggi. But he added that his company wouldn’t distance itself from Saudi Arabia — the biggest investor in its nearly $100 billion Vision Fund.

From the FT’s write-up of SoftBank’s earnings call:

“We have accepted funds from the people of Saudi Arabia that will be critical to diversifying the economy so that it will not be dependent only on oil,” Mr. Son said at the beginning of an earning briefing in Tokyo.

“It is true that this was a tragic case, but we also have a responsibility that we must uphold for the future of the people in Saudi Arabia.”

SoftBank is trying to walk a fine line between criticizing the Saudi government, which has been accused of orchestrating Mr. Khashoggi’s death, and losing its support. Given the importance of the Vision Fund to SoftBank, Mr. Son may feel he has no choice.

He’s not alone. Big consulting firms like McKinsey & Company and Boston Consulting Group have kept Saudi contracts. And Larry Fink of BlackRock said at the DealBook conference last week that doing business with the Saudis was “not something I’m ashamed of.”

More Saudi news: How Uber lined up a $3.5 billion investment. The brother of Prince Alwaleed bin Talal was reportedly released after a year’s detainment. And the U.N. is reviewing the country’s human rights record. 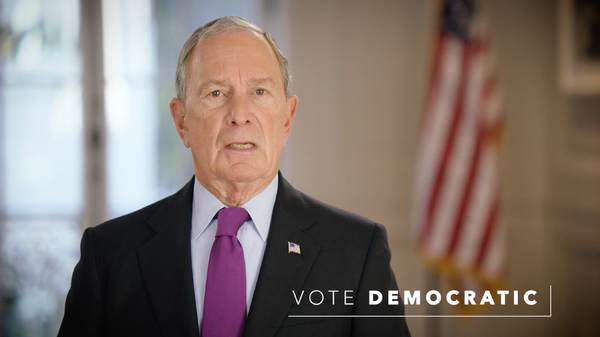 Mike Bloomberg’s push for Democrats, and himself

Before the midterm elections, Mike Bloomberg is making a (not entirely selfless) call to arms with a $5 million ad campaign to support Democrats.

The billionaire’s political action committee began running an ad on Sunday that directly criticizes President Trump. “At this moment, we must send a signal to Republicans in Washington that they have failed to lead, failed to find solutions, and failed to bring us together,” he says in the ad.

But the spot also establishes Mr. Bloomberg as a centrist while other potential Democratic contenders embrace more progressive positions. (He even wore a purple tie to make the point.) More from Robert Costa of the WaPo:

While formally a pitch for Democrats — to whom Bloomberg has given more than $110 million this election cycle — the ad is also revealing of the kind of presentation he could bring to the 2020 campaign trail. He speaks flatly with the faded Boston accent from his youth, devoid of partisan passion and with a technocratic emphasis on competence.

More midterm news: Many companies encouraged employees to vote. What the midterms could mean for businesses and for investors. And political ads are getting nastier — but candidates stand by the messages.

Amazon is reportedly in late-stage talks about its HQ2

The company is said to be getting closer to a decision about a location for its second headquarters. The WSJ reports that Amazon is discussing fine details with “a small handful of communities,” including Crystal City, Va.; Dallas; and New York. The WaPo suggests that Crystal City “is a front-runner.”

There might be a kind of consolation prize for the also-rans: Laura Stevens, Scott Calvert and Tawnell D. Hobbs of the WSJ write that “some also believe Amazon may announce plans to place smaller operations in runner-up locations.”

Amazon itself has said little about the process, though it has said a decision will come by the end of the year. Unidentified sources told the WSJ and the WaPo that a decision could be made public as soon as this month.

More Amazon news: A senior executive is displeased by leaks about HQ2, tweeting that the informant should “stop treating the N.D.A. you signed like a used napkin.” Some booksellers are boycotting an Amazon-owned service. And two workers died at a warehouse in Baltimore.

Fed policymakers hold their penultimate meeting of 2018. Analysts don’t expect rate increases or forecast changes, but they do expect an indication that the Fed would increase rates an additional 25 basis points in December. That would be the fourth raise of the year, and likely irk President Trump.

The Institute for Supply Management will release nonmanufacturing figures. Economists expect nonmanufacturing activity to have fallen slightly in October, with a September boost likely spurred by preparations for tariffs that went into effect that month.

At an international import fair in Shanghai today, President Xi Jinping promised further cuts to China’s import tariffs, and a further opening of its economy to the world. But as the FT notes, vows to import $30 trillion worth of goods and $10 trillion worth of services over the next 15 years don’t represent a significant increase from previously stated plans.

More interesting were a series of not-so-subtle comments by Mr. Xi that could be seen as directed at the Trump administration. “As globalization deepens, the practices of law of jungle and winner take all are a dead end,” he said. “Inclusion and reciprocity, win-win and mutual benefits are a widening road.”

But as Keith Bradsher of the NYT points out, the right people may not have been listening:

China’s challenge was on display, as well, particularly when considering who skipped the event. Despite months of energetic efforts by China to persuade foreign leaders to attend, only about a dozen presidents and prime ministers — from Hungary, the Dominican Republic and El Salvador, among others — showed up Monday morning. Many were leaders of countries like Kenya and Laos that have borrowed heavily from Beijing

How Huawei allegations weigh on partners

Australian intelligence officials determined that Huawei employees were asked to help the Chinese government infiltrate a foreign telecom network, according to The Australian Weekend, which cited an unidentified source. The allegation may renew American skepticism of the Chinese telecom giant — and partners like SoftBank of Japan.

It’s unclear whether the attempted hacking succeeded. But the report will play into the fears of American lawmakers who think that Huawei is a national security threat. That could be a problem for SoftBank, which has business ties to the Chinese company.

SoftBank has been trying to win approval to sell Sprint, which it controls, to T-Mobile. Lawmakers have pressured the Trump administration to scrutinize that deal on national security concerns. SoftBank has argued that it has complied with regulators since it bought control of Sprint, including spending millions to remove Huawei equipment from a related American network. But the Australian report won’t help its case.

American sanctions on Iranian oil exports resumed this morning. Rick Perry, the energy secretary, wrote in a WSJ op-ed that they will “deliver an unmistakable message to Tehran: Change your ways or suffer the consequences.” He added that moves by other nations, including Saudi Arabia and Russia, will mean there “should be minimal effect on global energy markets.”

But the Trump administration said on Friday that it had exempted eight countries, including China and India, from the sanctions. Meanwhile, European leaders are scrambling to set up a special-purpose vehicle to let them continue trading with Iran. And President Hassan Rouhani of Iran has said that the nation will break the sanctions in order to sell oil.

Warren Buffett has complained for years that he hasn’t had a chance to use Berkshire Hathaway’s cash hoard on a big deal. Late last week, he showed that he had put some of the money to use — by buying back the company’s shares for the first time in six years.

Berkshire reported $6.88 billion in operating profit during its third quarter, and used $928 million to buy back shares. It’s in keeping with Mr. Buffett’s longstanding belief that one of the best things an undervalued company can do is a buyback. But it also suggests that he doesn’t see any attractive takeovers.

Goldman Sachs reportedly will promote fewer than 65 executives to partner this year, the smallest number in two decades.

Susan Molinari, one of Google’s top lobbyists, plans to step down at the end of the year.

Beyond Meat, the maker of plant-based meat substitutes, appointed Kathy Waller, Coca-Cola’s C.F.O., and Ned Segal, Twitter’s C.F.O., to its board.

John Flannery will get $4.25 million from G.E. after being ousted as its C.E.O.

• Hackers are trying to meddle with election networks before the midterms. They have had “limited success,” according to a Department of Homeland Security report. (Boston Globe)

• Georgia’s secretary of state, who is running for governor, accused Democrats of trying to hack the state’s voter registration files, but cited no evidence. (NYT)

• Coke, PepsiCo and other big beverage companies are often behind ballot initiatives that would ban taxes on food sales. (NYT)

• American companies, already feeling the hit of the U.S.-China trade war, warn that things could get worse. (WSJ)

• Why U.S. sanctions on Russia might be more problematic than those on Iran. (FT)

• President Trump said that Google, Facebook and Amazon were “great companies” — but added that his administration is “looking at” antitrust claims. (Axios)

• The social network Gab is back online and filling up with anti-Semitic posts. (Related: Right-wing extremists see validation in President Trump’s language.)

• Tesla said that the Justice Department and the S.E.C. were investigating its Model 3 production forecasts. (CNBC)

• How middle-class finances have changed since 2016. (Upshot)

Thanks for reading! We’ll see you tomorrow.

You can find live updates throughout the day at nytimes.com/dealbook.