SINGAPORE (Reuters) – Asian share markets rose on Tuesday and safe-haven assets slid as signs of goodwill between China and the United States supported optimism for global growth, with the world’s two biggest economies preparing to formalize a trade-war truce. 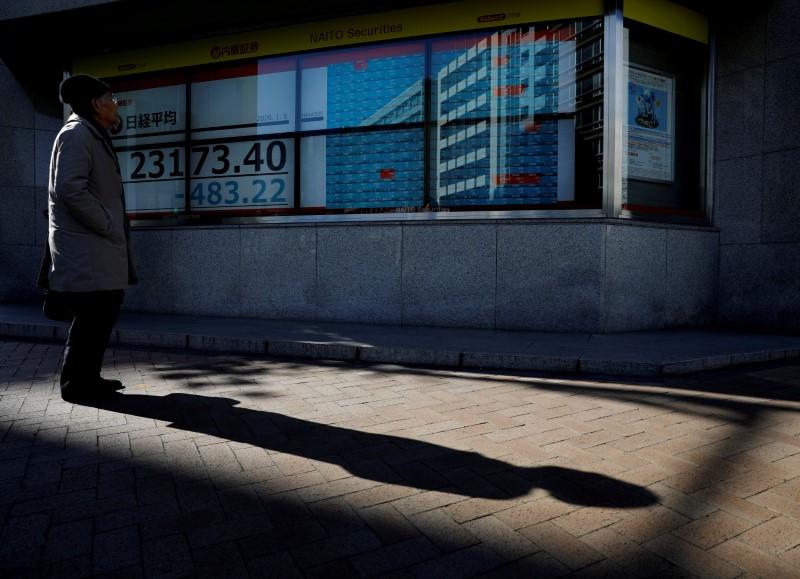 The U.S. Treasury Department on Monday said China should no longer be designated a currency manipulator – a label it applied as the yuan slid in August. China, meanwhile, has allowed the tightly managed currency to climb to its highest point since July.

The offshore yuan surged to a high of 6.8745 per dollar, the firmest level since July 26.

The moves come as a high-level Chinese delegation arrived in Washington ahead of Wednesday’s signing of the Phase 1 trade agreement, a step toward de-escalating a prolonged dispute that has hurt the world economy.

Japan’s Nikkei added 0.8% and hit its highest point in a month. Australia’s S&P/ASX 200 rose 0.7% and touched a fresh record intraday high. Gold fell and the safe-haven Japanese yen dropped to a seven-month low.

With the text of the deal still yet to be finalised, the gains could leave stocks exposed should anything go awry, he added, pointing to modest morning volumes hinting at caution.

“It’s buy the rumor, sell the fact…even a delay could see an extremely negative reaction,” he said.

“We’re going to make it public on Wednesday before the signing,” he said.

Overnight Wall Street made new record closing highs, driven by sharp rises in tech stocks as investors bet firms such as Facebook Inc, Microsoft and Apple Inc might have the most to gain from a growing global economy.

The S&P 500 rose 0.7% to a record closing high, while the Nasdaq Composite added 1% and also closed at a record peak. The Dow Jones Industrial Average rose 0.29%.

In tandem with the rally, safe-haven assets slipped and slid lower on Tuesday. Gold extended Monday’s fall to trade 0.2% weaker at $1545.15 per ounce.

In currency markets, the Japanese yen weakened past the 110 yen-per-dollar mark while the trade-exposed yuan stood at its highest since July.

Besides the trade deal, investors are also looking to U.S. inflation data due later on Tuesday and the beginning of the fourth-quarter U.S. company results season.

Big banks JPMorgan Chase & Co, Citigroup Inc and Wells Fargo & Co are due to report before market open on Tuesday.