Home » Business » After a Bumpy 2016, TV Anchors Play It Safe on Midterm Night

After a Bumpy 2016, TV Anchors Play It Safe on Midterm Night

Election Night on television is all about the projections.

But the slogan of Tuesday night’s midterm coverage might as well be “let’s not get ahead of ourselves.”

Scarred by the quick-change twists of President Trump’s victory in 2016, when anchors and pundits looked as stunned by the outcome as their viewers at home, TV news producers this year are treading carefully. Very carefully.

“I’m going to say this a lot tonight, and forgive me if I’m a broken record,” John King, CNN’s digital map maestro, said shortly after 6 p.m. “It’s early. Let’s just strap in for the night.”

That warning did not stop CNN, home of whooshing graphics and drumbeats, from breathlessly declaring a “KEY RACE ALERT” when all its anchors had to go on was a measly 2 percent of precincts reporting.

Still, the recriminations of 2016 — when the political news media found itself having to explain to viewers why, exactly, no one seemed to see Mr. Trump’s win coming — have not been forgotten. Tuesday was the first chance for networks to redeem themselves with skeptical viewers whose trust in news organizations has eroded.

[Make sense of the country’s political landscape with our newsletter]

“2016 was a good reminder that it’s better to be right than be first, so I’m sure the networks will be triple-checking their numbers before they go out on a limb,” said Jonathan Klein, a former president of CNN.

“Isn’t everyone you know more cautious about believing data nowadays?” he added. “The networks are no different.”

And lots of viewers will be tuning in.

With turnout across the country outpacing the number of people who went to the midterm polls four years ago, network executives were anticipating a surge of viewership on Tuesday.

In past years, the midterms — with their wonky math, diffuse narratives and less-than-familiar candidates — were usually granted about an hour of prime time on the Big Three broadcast stations, usually starting at 10 p.m.

The thought was that Americans would prefer a few hours of the usual sitcom and procedural fare before the eat-your-spinach coverage of voting results in distant Congressional districts. 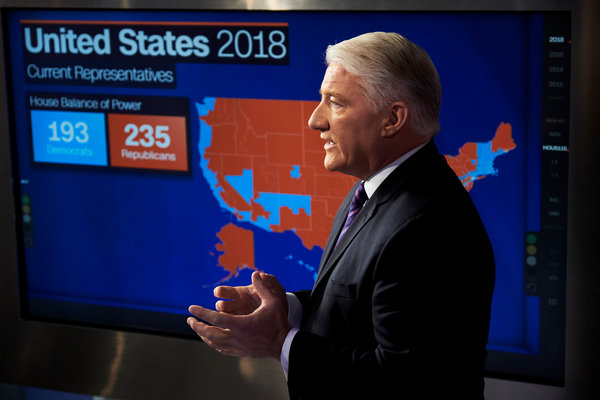 Not in 2018. ABC, CBS and NBC have allotted a supersize block of time to feed viewers’ appetite for political news. After ABC announced that it would devote three hours of prime time to election coverage, NBC and CBS followed suit, expanding their initial two-hour slot to an 8 to 11 p.m. schedule.

Cable news networks, whose ratings now regularly beat rival channels like ESPN, constructed glossy new sets for the occasion — Fox News, for instance, is broadcasting from a hub outside its studio on Avenue of the Americas in Manhattan — and added new bells and whistles to its digital touch-screen maps.

The visual breakdown of precinct results was expected to be all the more important on a night when anchors were juggling nearly 500 races across the country.

With control of the House up for grabs this year, networks were expected to shower attention on the kinds of smaller Congressional races that in previous years drew little or no airtime. Television anchors and producers said there was a simple reason: the audience is there.

At NBC News, executives realized there could be interest in granular district races after MSNBC scored huge ratings for a special congressional election in Pennsylvania in April, said Steve Kornacki, one of the network’s featured election night anchors.

“In the history of television and cable news, you couldn’t go live wall to wall with a special election in a congressional district in the southwest corner of Pennsylvania and expect to get any kind of an audience,” Mr. Kornacki said in a recent interview.

After the ratings came in the next day, Mr. Kornacki said, there was an understanding that MSNBC viewers were craving that kind of coverage. “My sense is that folks here were like, ‘If there’s interest like this for a district in southwest Pennsylvania, there’ll be interest for a couple dozen of these on election night,’” he said.

On CBS and NBC, midterm coverage was scheduled to continue into the early-morning hours. When Stephen Colbert hosts a live edition of “The Late Show” at 11:35 p.m., a CBS News ticker was set to run along the bottom of the screen, so that viewers can keep up with real-time results.

If major news happens — a verdict on control of the House, say, or the outcome of the Florida governor’s race — Mr. Colbert is prepared to hand off to his network’s news division, whose anchors are standing by to break in.

NBC’s coverage of the election will take the place of Jimmy Fallon’s “The Tonight Show,” which shies away from political fare. After that, at 12:37 a.m., the network will offer a live edition of the more politically minded “Late Night with Seth Meyers.”

In 2016, as Mr. Trump’s electoral numbers were rising, Megyn Kelly, then of Fox News, told viewers that “the pollsters were dead wrong,” adding: “You tell me if the polling industry is effectively done?”

Pollsters, including Nate Silver and The Upshot at The New York Times, faced tough questions after the 2016 result. But the same outfits that seemingly failed to anticipate Mr. Trump’s victory remain the standard-bearers.

Ms. Kelly, meanwhile, will not be a presence in American living rooms on Tuesday. She had been slated to co-host NBC News’s political coverage. But after the cancellation of her morning show, Ms. Kelly will, for the first time in years, spend election night on the bench.