Home » Business » A 6-Year-Old Asks Why There Are No Female Toy Soldiers. Now, There Will Be.

A 6-Year-Old Asks Why There Are No Female Toy Soldiers. Now, There Will Be.

Since their debut in the 1930s, toy soldiers have, at their core, hardly changed. They stand two to three inches tall. They are made of plastic. They carry lethal weapons. And they have been, almost without exception, male.

But that is set to change, thanks in part to an indignant 6-year-old from Little Rock, Ark., named Vivian Lord.

Next year, one toy company will, for the first time, release toy soldiers depicting women in combat roles in the American military after Vivian’s complaints spurred widespread media coverage this summer and fall.

“There are girls in the Army, but they didn’t make any girl Army men,” Vivian said in a recent interview. “So I wondered why.”

Vivian made her discovery in July, when, after a particularly productive trip to an arcade while on vacation in Alabama, she redeemed her hard-earned tickets for a batch of toy soldiers.

She was used to playing with her older brother’s soldiers, but these were now her own. And as she lined them up on a coffee table — the good guys versus the bad guys — she realized that all of them were, in fact, guys.

That bothered Vivian. So she questioned her parents. Her mother, Brittany Lord, suggested that her daughter write a letter and complain directly to the toy companies who make and sell the soldiers. So Vivian did.

“Why do you not make girl army men, my friend’s mom is in the army too!!” Vivian wrote in her letter, which Ms. Lord sent to three toy companies. “So why don’t you make them too!!!!!”

Vivian wrote that she had previously found packs of male soldiers colored pink, presumably to appeal to girls, but she could tell those were still men. She said she wanted “girls that look like women.”

Ms. Lord did not expect a response to Vivian’s letter. But one copy reached Jeff Imel, owner of BMC Toys in Scranton, Pa.

Mr. Imel trades in nostalgia, what he calls “pop culture perennials.” He sells about 80 toy soldier products, including bags and box sets, even though most other American manufacturers have gone out of business over the decades as operations moved overseas and fighting toys declined in popularity.

And, as it turned out, Mr. Imel had heard complaints like Vivian’s before. 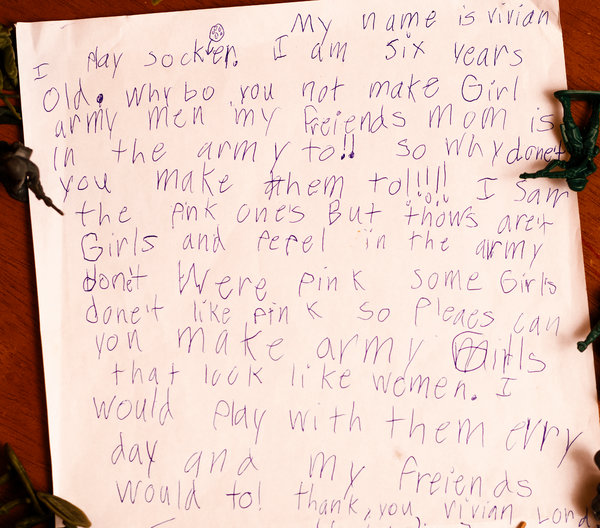 Last June, one of those complaints came from a retired United States Navy fleet master chief who believed that female toy soldiers could help women in the military be seen as equal to men.

“I grew up playing with my brother’s plastic green soldiers,” JoAnn Ortloff, the retired fleet master chief, who spent 33 years in the Navy, said in an email to Mr. Imel. “My 3 granddaughters are young. I want to expose them to playing with the toy soldiers as well, but there are no female soldiers in the toy form.”

Ms. Ortloff, 56, who still serves on the Department of Defense’s Advisory Committee on Women in the Services, said she often volunteered at events honoring women in service, sometimes displaying the pink toy soldiers.

“Men who picked them up, as well as women, said they were cute girl versions of men,” Ms. Ortloff said. “I realized this was the absolute wrong message women in the military want sent.”

Mr. Imel was sympathetic to the idea. He had, in his research, found some examples — a novelty set of female figures from Japan, wearing high heels; and plastic Army nurses from the 1950s.

He promised Ms. Ortloff that he would explore the idea, but said that making new products was expensive. A year later, his response to Vivian’s letter was largely the same.

Then came the news media.

It started with local outlets in Little Rock, after one reporter had seen a copy of Vivian’s letter that Ms. Lord had posted on Facebook. In one story, Ms. Lord mentioned her exchange with Mr. Imel.

CNN and a veterans publication published stories online. Soon, Mr. Imel was getting calls to do interviews on national television networks like CBS.

Mr. Imel said he then realized he had made a “huge mistake” in putting off complaints like Vivian’s and Ms. Ortloff’s.

“All hell broke loose with the media,” he said, “and I haven’t had a chance to catch my breath since.”

He commissioned sketches, and made a preliminary model — called a sculpt — out of resin, then displayed it at a toy show in Chicago in September. Three other sculpts are under development.

He plans to start a crowdfunding campaign next month, through which people will be able to pre-order the soldiers. Full packs will be available before next October, he said.

He got another note from Vivian.

“Vivian sent me a really nice thank you letter — on construction paper,” Mr. Imel said. “That’s how you know a kid cares, putting it on their colored paper.”

Vivian said that she jumped up and down when she heard Mr. Imel would make the female soldiers.

And for Ms. Ortloff, she said the project “is very important to me, and so many women, to provide an equal play option for our children.”

She added, “We are not cute girl versions of male soldiers.”

Mihir Zaveri covers breaking news from New York. Before joining The Times in 2018 he was a reporter for The Houston Chronicle.